Personally, this place ticked all the boxes. It was close to Athens main railway station & all Metro lines. It was quiet in the mild, balmy, evening. Breakfast included was more than satisfactory for the day ahead. Staff were friendly, courteous & v helpful; football on big screen TV; baggage storage facility available; rooms were ideal, iron available. Great value price; I travelled Europe with Interrail and this was by far the best hotel I used. Fellow travellers, in Athens choose Socrates. Bon Voyage 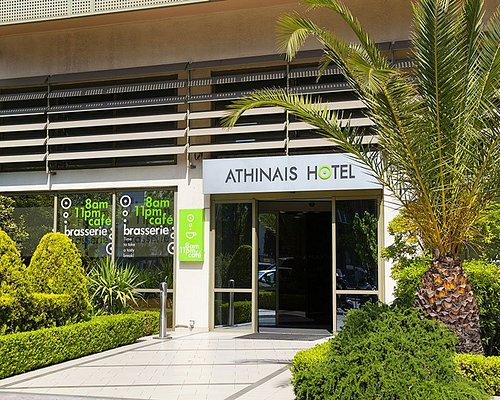 I had never expected to be the way it was I thought to myself is going to be ok. Till the morning not having water in the whole hotel,that I couldn't take a shower or wash my face or mouth it was not good. Then pass almost 9 pm when I got back to the socrates hotel in athens they say why are you happy? you're here. I had to say is not very polite to be sarcastic after a day of inconvenience. Went to sleep next morning going to eat breakfast was worst no coffee available due to the not replacing the timer on the machine that was mess up the day before for no water.conclusion make you own adventure but if I had the money I won't stay in this place again not recommended to anyone.

This review is the subjective opinion of a TripAdvisor member and not of TripAdvisor LLC.
Christopher D
Fairfield, Australia
3239
Reviewed May 13, 2019
It achieved it's aim and that's about it!

I stayed here for 2 nights in March 2019 as a way of breaking up a trip between Australia and Sweden, and a way to see a new city. This hotel is well connected to public transport, with both the overground trains (Athina station) and the underground metro network (Larissa station) being within 300 metres of the hotel. I was placed on the 4th floor, and quite crucially, this hotel did have a lift available to use, something that doesn’t always happen in European hotels of this style. My room, whilst a touch on the small side, did have enough room to easily move around and place my bag flat on the floor. There was a smoking balcony attached to my room, as per a lot of Athenian/Roman style hotels from the second half of the 20th century. Using my balcony, I had a view of the Athina train station, the main road, and a basketball court across the road. Further, I did think that it was a nice touch to have a poster in the room, which had a number of basic Greek phrases and their translations into English, I did think that this was helpful. The staff I encountered whilst checking in were amicable and the process was completed relatively quickly. A complimentary breakfast was offered to all hotel guests. This breakfast was representative of a continental European breakfast, and as such was quite disappointing. The breakfast consisted of some cheese, corn flakes and a small selection of tea, coffee, juice and water. For what it was, the hotel achieved its aim – it was well connected to public transport (including to Eleftherios Veneizelos Athens Airport) and the bed was reasonable. As such, for a relatively cheap price I would consider staying here should I desire to stay in Athens again.

This review is the subjective opinion of a TripAdvisor member and not of TripAdvisor LLC.
cedricmichael
1
Reviewed May 13, 2019
HOTEL ROOM NOT AS ADVERTISED ON WEBSITE

I booked room for three people via Booking.com from 14th to 18th August. When I reached on 14th August there was a double bed and a bunk bed in the room which was not what was advertised on the website but the website clearly showed three beds on the room. When I contacted the hotel management they were very rude and informed me that the hotel is completely booked and they cannot do anything and if I have any complaint I should contact Booking.com to complain. I think this was really uncalled for and it spoiled my trip and we three had to rotate to sleep on the bunk bed as it was not very comfortable at all. I would not recommend if your party is more than three people and also because of bad customer service.

Room tip: If you party is more than three guests I would not recommend this hotel
Ask cedricmichael about Hotel Socrates
Thank cedricmichael

This review is the subjective opinion of a TripAdvisor member and not of TripAdvisor LLC.
Susanshees
Greater London, United Kingdom
63
Reviewed May 10, 2019 via mobile
Yuk

Booked in to this place on Wednesday and booked straight out. The bathroom was filthy and the floor in the bedroom was all broken room was so small and staff so rude and can't even get out money back from booking. Com also was advised the area is not a nice area especially at night

This review is the subjective opinion of a TripAdvisor member and not of TripAdvisor LLC.
Tibi_Trif
Brasov, Romania
1722
Reviewed May 10, 2019 via mobile
Cheap but not great

Stayed for 5 nights on the 4th floor:
1. Plus:
- some staff is friendly
- hotel is cheap
- train station and metro very close
- acceptable rich breakfast (ham, cheese, croissants, eggs, cereal, milk,coffee, tea, bread, Nutela, jams) and that is about it.

2. Minus:
- general impression is that staff neither friendly neither bad.
- room was small. (booked double room)
- bathroom very small. (shower booth is impossible)
- hotel is opposite a football court where some afro people play football all day long until late at night.
- breakfast the same everyday. (no exceptions made) would have been great to have something greek and not ham and cheese everyday.
- some little spiders in bathtub.
- elevator small.
- hotel is pretty old (but renovated)
- although is quite near from downtown you have a lot to walk for Acropole (30-45 min walk) the old city center or downtown (approximately 3 km)

This review is the subjective opinion of a TripAdvisor member and not of TripAdvisor LLC.
View more reviews
PreviousNext
123…40