$32
$15
View deal
Free cancellation until 10/21/21
Priceline$18
Hotels.com$24
eDreams$32
View all 12 deals
Prices are the average nightly price provided by our partners and may not include all taxes and fees. Taxes and fees that are shown are estimates only. Please see our partners for more details.
David L
Zabljak, Montenegro
7622

Only for couch potatos 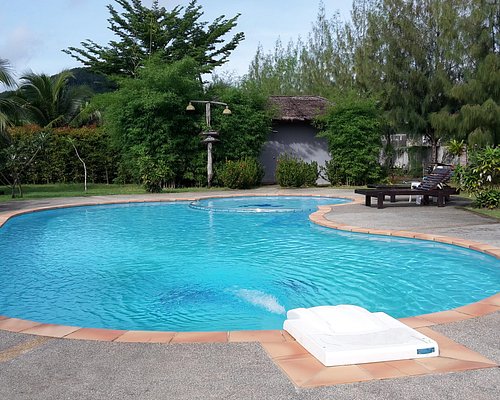 firstly the room was smelly, the furninshings were old and dated, the bathrooms full of small flying insects. Our children complained of getting bitten by ants during the night in their beds, never mind the mosquitoes and there was plenty in this reclaimed bit of mangrove swamp. As for the fridge it was big enough to put some berr in but that was ll, not enough to put food for a few days in.
The smell of fumes from the painting at the boatyard on the property were unpleasant most of the time, whilst at other times a dusty odour was able to be smelt from the sanding down of boats near our apartment.
The pool was dirty, the water looked really clean but when you touched the bottom it was scary. Light fittings were haning down in the pool and the bar was only open on occasions selling cocktails made from cheap local thai alcoholic drinks.
the internet access was expensive and slow and there were groups of tourists coming and going all hours of the night. These tourists partied al night and the noise was unbearable, We complained and complained but nothing was done about it, in the end we decided for our own sanity to check out early and were not given any refund even though we paid for a full week when we stayed there. Overall we felt the whole place was on the take and wanted to take our money and not really offer any service. When we left we found a more suitable hotel at half the price which included a really nice breakfast..

This review is the subjective opinion of a Tripadvisor member and not of TripAdvisor LLC.
BeachSwimOne
New York City, New York
5341
Reviewed June 24, 2012
Awful

The resort is very run down and not very clean. I came with my family & booked two rooms, side by side. While both rooms were old, one had ants everywhere. We called the front desk, but instead of moving us, they sent someone up to spray repellent. Not only was it ineffective, it left the room smelling heavily of pesticide; not that the rooms smelled any better before. There was definitely a musty/moldy odor and I had many reservations about the cleanliness of the entire room/resort. The pools are nothing to be impressed by and the food not quite mediocre. The place is swarming with people on tour groups, making the food very catered towards them (specifically Chinese). The location was not very ideal and the views were of boat yards. The resort requires much maintenance and remodeling.

This review is the subjective opinion of a Tripadvisor member and not of TripAdvisor LLC.
lucamalee
Phuket Town, Thailand
3232
Reviewed April 2, 2012
good place and good price to stay

My last holiday it was great we stayed at Boat lagoon Hotel the hotel is nice and service is good.
food it not expansive we are stayed with good view of marina we can see a lots of yacht came from around the world i can't tell you all of thing .you have to see by yourself and Boat lagoon Hotel it not far a ways from sounding island of Phuket for example Koh Khai(nice beach and nice coral reef good for relaxing) Koh Rang(the place to see pearl farm and also a lots of activities) Koh Mah-Praw (coconut island nice beach and not many tourists good for relaxing)
Boat lagoon hotel still waiting for you to stay and visit if you don't mild about beach.
i ready to give real information for someone who know this from tripadvisor.

IMPORTANT TO TRIPADVISOR TEAM THE ADDRESS OF BOAT LAGOON HOTEL IS WRONG.

THIS IS A CORRECT ADDRESS OF BOAT LAGOON HOTEL

This review is the subjective opinion of a Tripadvisor member and not of TripAdvisor LLC.
Jla1988
13
Reviewed March 19, 2012
Boring hotel , very rude staff

We stayed in boat lagoon resort for five days and I must say it was probably one off the worst hotels I have stayed at, we found the staff rude especially the reception staff ,it was like they didn't want to do any thing for you, everything was an affort. I don't usually complain about hotels but I must say I was not impressed at all. The breakfast was horrible they say it is an American breakfast more like Chinese or japanese! There is literally nothing around here and it is expensive to travel into phuket town which is a liberty as they should provide a shuttle bus, I wouldn't recommend this hotel to anyone I would tell them to steer clear!

This review is the subjective opinion of a Tripadvisor member and not of TripAdvisor LLC.
Ladywells
London, United Kingdom
3757
Reviewed January 28, 2012
Stay from 24th Dec to 30th Dec 2011

We were lucky to stay in a studio apartment over looking the marina with all the expensive boats. The apartments are unfortunately a bit dated & old looking inside. The amenities though , are good with a small kitchen area, bathroom with shower & bedroom with wardrobes & a safe which is free.

The marina have quite a few eating places. We ate at the Watermark on Xmas Day which had a lovely atmosphere with music playing. The food was first class but as most people have said, a little pricey compared to other eating places around the marina. Glad we ate here as the staff were lovely & it is nice eating overlooking the boats. We also ate at the Indian which was also very dated but the food was very hot & tasty. There is an italian called La Taverna where the food was lovely but the service wasn't - I felt! Near the lighthouse there is a fantastic baker with tasty pastries, bread, sandwiches, to eat in or take away. After 4pm they were reducing the cakes, so we were rather greedy after a day out we would end up at the bakers for a tasty pastry. On site there is a grocers convenience store which is reasonably priced. So get your water, drinks, food here is ok. Compared to Tesco Lotus not bad prices.

We used the pool near reception. It was rather dirty the first couple of days we were their. Someone must have complained as after that someone would be cleaning it daily. The swim up bar unfortunately wasn't open, so that was rather disappointing. We ate at the restaurant next to the swimming pool & found it very reasonable. The pool was very quiet during the day time as the hotel catered for lots of Asian coach parties. Which had breakfast & then went out for the day. In the evenings we were out in the restaurants around the Marina so didn't really see them that much.

We used the hotel to order taxi's as they did not rip you off. We got a taxi one way to Tesco Lotus & then arranged it ourselves to come back. They have set prices so it was the same as when we ordered it from reception. Also you are close to Premium Outlets & Central where there are lots of shops & eating places.

We had arranged lots of trips before we arrived at the hotel but the reception staff were very helpful & always smiley when we were about when asking them for details.

All in all a nice stay. I would not personally stay here again as rather old accomodation & I prefer to stay at a beach resort. This was an experiment & not a mistake by choosing the boat lagoon. We had a lovely relaxing stay so we can't really complain about it. The cleaners were good & the staff at reception were lovely. So a nice place to chill around the pool in lovely gardens.

Room tip: We stayed in the studio apartments overlooking the marina. You have to climb stairs with suitcases so be prepared. We also called for the free shuttle to take us to the pool if we were feeling lazy. The accomodation is fully equiped but rather old fashion. Spacious with lots of cupboards/wardrobes/drawers.
Ask Ladywells about Boat Lagoon Resort, Phuket
Thank Ladywells

This review is the subjective opinion of a Tripadvisor member and not of TripAdvisor LLC.
View more reviews
PreviousNext
1…161718…
<script type='text/javascript' crossorigin='anonymous' async onerror='__scriptLoadError(this,true);' src='https://static.tacdn.com/assets/PCbs_l.984eace9.es5.js' data-ru