“A lovely holiday apartment.”
bkNlXzU3X0NyTw==
other travelers have booked this property 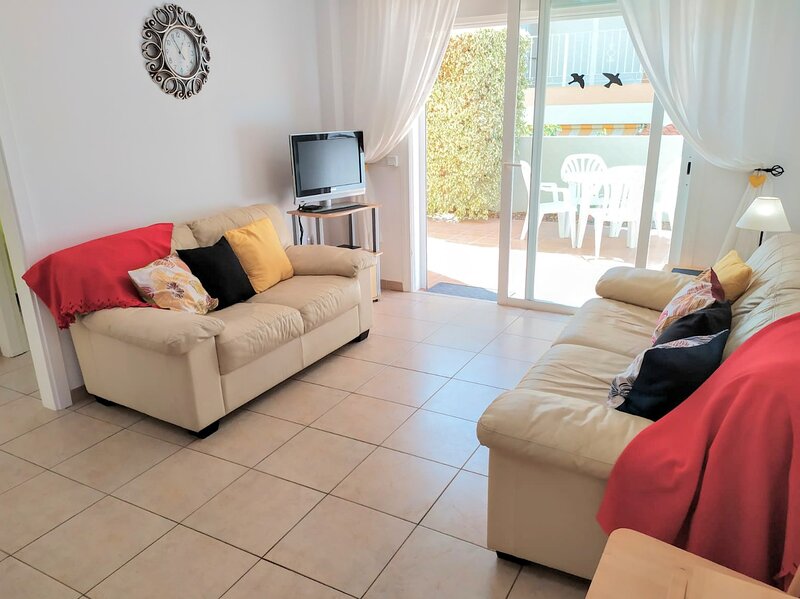 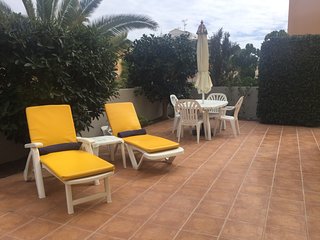 Excellent - based on 21 reviews
Write a Review

Situated near the edge of Playa San Juan towards the Alcala end is this easy to find apartment. It is situated in a fairly modern block that is mostly quiet (despite one of the neighbours extremely annoying bird that makes noise all day long!).
The apartment, although fairly compact, is perfect for a week away. Everything is on hand that is needed, lots of cooking equipment and crockery. The sitting area is comfy and the tv/DVD player great. The main bedroom is spacious with a comfy double bed and built in wardrobes which have plenty of hangers in them.
The blinds/shutters keep the apartment cool and the ceiling fans help circulate the air.
Outside is plenty of space on the sun terrace, it's pretty much the size of the apartment! It is in close proximity to other apartments so if you were looking for seclusion it wouldn't be the apartment for you, but it didn't bother us.
On a very picky note, more than one toilet roll and some washing up equipment such as a cloth/tea towel would be a useful addition.
However that said we had a lovely relaxing stay, and communication with Judith was extremely useful and helpful at all times. Thoroughly recommended!

Date of stay: December 2015
Was this review helpful? Yes
This review is the subjective opinion of a TripAdvisor member and not of TripAdvisor LLC.
'Thoroughly recommended' Thank you for taking the time to leave a review. We are pleased that you had an enjoyable holiday. We leave washing up liquid, soap, kitchen cloths/tea towels etc in the apartment for each arrival. Where, on the rare occasion that we may fall short of our usual high standards we are happy for contact which gives us the opportunity to put any issues right regarding the apartment. We are happy to say we get many repeat bookings (who are not annoyed by the bird!) and would love to welcome you back in the near future.
This response is the subjective opinion of the management representative and not of TripAdvisor LLC.
Problem with this review? Thank you. We appreciate your input.

Great apartment , very quiet yet handy for everything, it does exactly what it says on the tin! this was our third stay in this apartment and we are booked in for new year this year having holidayed on Tenerife for 30 years in January San Juan is now our regular destination as hopefully this apartment is !!! the buses are very good and you can get all round the island by bus we even travel to and from the airport by service bus . also there are plenty of nice bars and restaurants within the village and at last count no " British bars " Bliss......

Date of stay: January 2015
Traveling group: Spouse/Partner
Would you recommend this hotel to a friend?   Yes.
Was this review helpful? Yes
This review is the subjective opinion of a TripAdvisor member and not of TripAdvisor LLC.
Problem with this review? Thank you. We appreciate your input.

We had a good week staying the apartment it is well equipped with everything supplied to make you're stay enjoyable. The sun terrace lives up to it's name you can get the sun most of the day at some point on the terrace. There is a big supermarket just a few minutes from the apartment and a lovely bar next to it. it's about 10 - 15 minute stroll to the harbour and there are many bars and shops on the way. The buses are very handy for getting out and about to the places near San Juan, the taxis are very reasonable too. We were 42 euros for taxi to and from the airport. Judith the owner is very helpful and I know would have gone out of her way to sort any problems that might have arisen, luckily there were not.

Date of stay: September 2015
Liked best: The size of the sun terrace
Liked least: probably no air con
Traveling group: Spouse/Partner
Would you recommend this hotel to a friend?   Yes.
Recommended for:
Was this review helpful? Yes
This review is the subjective opinion of a TripAdvisor member and not of TripAdvisor LLC.
Problem with this review? Thank you. We appreciate your input.

Small, modern-ish apartment. Big drawback was the fact that the large sun terrace was overlooked by the 3 story apartment block in front which blocked the sun for 2 hours before sunset, i.e. from 4.30 when we were there in March. At least 10 apartments overlook the sun terrace and there is no view at all, so visions of sitting sipping a glass of wine whilst watching the sun set were dashed!
The bed is only a double, so if you are used to a king size, be warned. We had to sleep in separate rooms because of this, but no bedding was provided for the other bedroom so we had to improvise.
No towels were provided for the sun beds but this was rectified by a phone call to the owner who sent the cleaner to sort it out. The towels in the bathroom left a lot to be desired and there was no bath mat.
Be warned that there are small ants in the kitchen and bathroom.
No WiFi.
Loved San Juan itself, there are many lovely restaurants, I would particularly recommend garlic chicken at Restaurant David on the main street going up from the church.
The apartment is a long way from the main beach and there is no swimming pool anywhere near the apartment that can be used, as there are no hotels as such in San Juan.
Wouldn't book this apartment again, would look for one nearer the sea front with a view and a swimming pool.

Date of stay: March 2015
Liked best: San Juan itself.
Liked least: No view, no wifi, overlooked.
Traveling group: Spouse/Partner
Your age range 50-64
Would you recommend this hotel to a friend?   No.
Recommended for:
Was this review helpful? Yes
This review is the subjective opinion of a TripAdvisor member and not of TripAdvisor LLC.
After reading the latest review regarding my apartment. I feel it prudent to respond thus.

The property is as advertised. Therefore there was an awareness before booking, that there is neither a pool or Wi-Fi available on site.

The advertisement states that there is a double bed. If this was deemed to be inadequate, a simple request for extra bedding for a single bed would have alleviated any problem, similarly to the situation where sun bed towels were provided on request.

Unfortunately some of the comments are misleading. It takes ten minutes to walk to the beach and five minutes to the sea, to see the sunset, therefore it could be a bit of an exaggeration to describe this as a long walk.

As this is an apartment, not a villa, there would be an expectation of some other apartments in close proximity. Ten, again, would be an exaggeration. The facts are that during the occupancy period, three opposite and one above were unoccupied. therefore being overlooked is questionable.

When the sun is lower in the sky in March, it disappears from the terrace at around 6.30 pm and sets at approximately 8.00 pm

The comments regarding the bath mat has been assessed, and a toweling mat has been supplied, as an addition to the existing non slip bath mat currently in situe.

As with any hot country, there will be occasions when 'bugs' and 'microscopic ants' are present, that is why there is always a spray in the apartment to deal with this situation should it arise.

This review has been quite disappointing to read, as there has been an awful lot of thought and effort gone into setting up the apartment, always with the care and comfort of future occupants in mind.
This response is the subjective opinion of the management representative and not of TripAdvisor LLC.
Problem with this review? Thank you. We appreciate your input.

46 helpful votes
“Excellent Accomodation in a great area of Tenerife”
Reviewed February 25, 2015 for a stay in December 2014
1
person found this review helpful

Travelled with my husband and mother for her 80th Birthday, sadly there was a bit of a 'hicup' with the booking, not the owners fault but Holiday Lettings... However Judith the owner resolved these issues quickly and effectively and we arrrived to have a lovely week in a well equipped appartment with a huge sun terrace and lots of local ammenities. The appt is in a very spanish setting with lots to do and local transport that takes you further afield should you wish to leave the lovely San Juan. Will definately return and would certainly recommend.

Date of stay: December 2014
Liked best: Location and accommodation
Liked least: No wifi
Traveling group: Extended Family
Would you recommend this hotel to a friend?   Yes.
Recommended for:
Was this review helpful? Yes
This review is the subjective opinion of a TripAdvisor member and not of TripAdvisor LLC.
Problem with this review? Thank you. We appreciate your input.

This was our second trip to this apartment , it is lovely and quiet yet only yards from anything you may require. value for money and comfortable would recommend the apartment and to resort .

Date of stay: January 2015
Liked best: The large sunny patio areas
Traveling group: Spouse/Partner
Would you recommend this hotel to a friend?   Yes.
Recommended for:
Was this review helpful? Yes
This review is the subjective opinion of a TripAdvisor member and not of TripAdvisor LLC.
Problem with this review? Thank you. We appreciate your input.

Stayed for 12 nights, apartment had everthing needed if you wanted to cook in.We eat out every night so did not cook.Good location short walk to the shops beach etc.Lots of places to eat at, best food away from the sea front.San juan is very laid back resort unlike couole of places we went to.Will return someday.
Judith the owner helpfull with any queries.

Date of stay: August 2014
Liked best: location
Liked least: size of bath towels very small
Traveling group: Spouse/Partner
Would you recommend this hotel to a friend?   Yes.
Recommended for:
Was this review helpful? Yes
This review is the subjective opinion of a TripAdvisor member and not of TripAdvisor LLC.
Problem with this review? Thank you. We appreciate your input.
Previous Next
1 2 3 4
Updating list...
Still can't find what you're looking for?

Looking for a place to stay in Playa San Juan?
View all 49 vacation rentals