AMAZING! Would come back again to this... - ALPHAVEN Apartment C - Breathtaking Panoramic Views

“AMAZING! Would come back again to this piece of...”
bk1HXzExX0M4Qw==
other travelers have booked this property 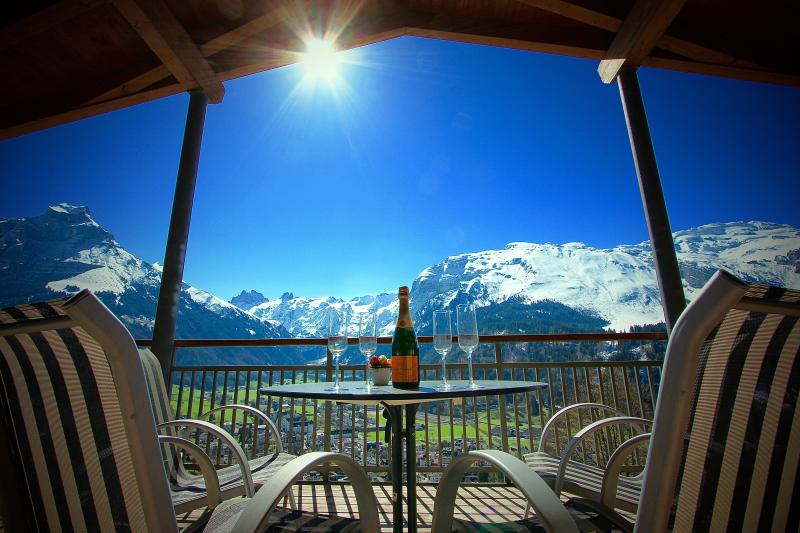 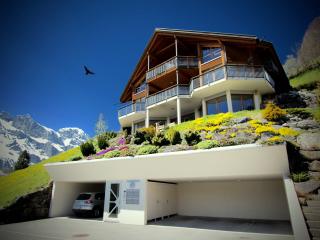 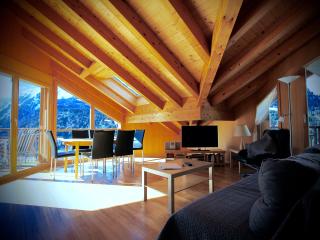 Excellent - based on 114 reviews
Write a Review

Our family of four stayed in apartment B for one week in May 2013. The pictures did not do the experience of the view or the cleanliness and ease of the apartment justice. The simplicity and design of this apartment was a perfect getaway to escape to after a long day of travelling throughout Switzerland. The beds were super comfortable, the kitchen well equipped with everything needed for preparing dinner or simply having a wonderful fondue and a bottle of wine. The bells from the monastery were beautiful and added to the ambiance and the beauty of this paradise. Although the weather was not cooperating the week we were there we still enjoyed our stay immensely and the view from the apartment of the village below was breathtaking with a light snowfall. Candy was wonderful assisting us with suggestions and ideas for travelling and the train depot was close by and the train was our mode of transportation during the week. The people living in the village of Engelberg could not have been nicer and made us feel welcomed into their small community of 4,000. We would absolutely rent this beautiful apartment again from John and Ursula. They were really great to work with to make this rental happen and communicated quickly and openly. Thank you both for sharing your beautiful home with our very lucky family of four!

Date of stay: May 2013
Liked best: Everything - the view, amenities, ease of living, comfort of beds/bedding, privacy
Liked least: the drive up to the house was a little hairy at first but eventually got used to it. :-)
Traveling group: Teenagers
Your age range 50-64
Would you recommend this hotel to a friend?   Yes.
Recommended for:
Was this review helpful? Yes
This review is the subjective opinion of a Tripadvisor member and not of Tripadvisor LLC.
Problem with this review? Thank you. We appreciate your input.

We stayed at two other aparments during our trip to Europe and Alphaven was, by far, the best overall. It was very relaxing and clean with beautiful views day and night. We would love to come back in the future to hike some more trails!

Date of stay: July 2013
Liked best: View, cleanliness and hospitality of hosts
Liked least: One bathroom
Traveling group: Teenagers
Would you recommend this hotel to a friend?   Yes.
Recommended for:
Was this review helpful? Yes
This review is the subjective opinion of a Tripadvisor member and not of Tripadvisor LLC.
Problem with this review? Thank you. We appreciate your input.

We stayed in Apartment B and were amazed with the view from the panorama windows overlooking the mountains and valley of Engelberg... The hosts were very friendly and did everything possible to make us enjoy our stay. The flat had everything we needed and there was also a shared sauna in the house for the guests to use. The house is a 3 min walk from the bus stop from which you can go to the Titlis main lift in under 10 minutes.
We would definitely recommend Alphaven to anyone!

Date of stay: March 2013
Liked best: the view!
Liked least: all was good
Traveling group: Spouse/Partner
Your age range 25-34
Would you recommend this hotel to a friend?   Yes.
Recommended for:
Was this review helpful? Yes
This review is the subjective opinion of a Tripadvisor member and not of Tripadvisor LLC.
Problem with this review? Thank you. We appreciate your input.

Whilst it was some time ago now, the fact that my family & I still talk about our week in Engelberg staying at Alphaven says it all. My sons thought it was the highlight of our month holiday through Switzerland, Italy & England! We had lovely days of hiking - you definitely have to get hold of the Trotti Bikes!!! Great fun even for slow mums! During the week we had some fantastic weather followed but snow followed by fantastic weather - you couldn't ask for more. It was heavenly watching the complete change in the seasons from our balcony with a glass of wine listening to the cow bells. During the bad weather day we went to the indoor sports centre & swam at the pool at the nearby hotel. The apartment was so comfortable & the DVD's were welcomed by the boys. We cooked some nights & enjoyed the fondue restaurant recommended by John in town a couple of times. John was sooo helpful in the leadup to our visit offering suggestions & answering all my queries. We had a car so getting supplies back to the apartment was never a problem, also driving to the various stations for the lifts/cable-cars. Definitely wouldn't hesitate recommending this wonderful apartment.

Date of stay: September 2011
Liked best: The view and the location
Liked least: Absolutely nothing
Traveling group: Teenagers
Would you recommend this hotel to a friend?   Yes.
Was this review helpful? Yes
This review is the subjective opinion of a Tripadvisor member and not of Tripadvisor LLC.
Problem with this review? Thank you. We appreciate your input.

If you have a hustle and bustle life in a big city, this place is where you should be for the vacation. Booking is very easy and smooth. Don't worry about the view it would be better than any imagination. The owners, John and Ursula, have prepared a clean, well-equipped and cozy apartment. You can cook all the meals, watch TV, read books.. just like being at home.

When we arrived at the train station we called a taxi to Alphaven. It cost us 15CHF. If you plan to cook most of the meals, I suggest you buy all the stuff at the supermarket COOP first, before you take the taxi. Alphaven is located on the north hill of the little town, so it can be quite exhausting to go up hill by walk, carrying two or three heavy bags of supplies including drinks. There is a free ski bus no.4 taking you to the entry of Zelglistrasse but then you still have to walk upward for around 10 minutes to the apartment, which could be a good/tough exercise in the heavy snow season. For those who don't fancy such exercise, buy the stuff first and take the easy-ride of taxi together with your luggages.

But John's friend, Candy, was so helpful that she offered a lift several times during our trip. So we went down to the town by her car, to save the waiting time of shuttle bus (one in every hour, last one back to Alphaven is around 17:30). Thanks, Candy.

On the last day of our stay at Alphaven, we were told to leave the apartment by 10am. Then we moved to a four-star hotel, Waldegg, which is claimed to be only 8 minutes by walk from Alphaven. So we took our suitcases and started walking down. But it was so slippery after the snow that we thought we could never reach the hotel. If you plan to spend your winter vacation there, don't underestimate the walking both to and from the apartment.

Nevertheless the apartment itself is just as great as reviewed and described by all the travellers. I would definitely want to go back for summer vacation, and actually I am already expecting this :)

Date of stay: December 2012
Liked best: view, facilities of the apartment
Liked least: walking back to the apartment on snow and ice
Traveling group: Friends
Would you recommend this hotel to a friend?   Yes.
Recommended for:
Was this review helpful? Yes
This review is the subjective opinion of a Tripadvisor member and not of Tripadvisor LLC.
Problem with this review? Thank you. We appreciate your input.

La Grange, Illinois
Reviewed November 1, 2012 for a stay in October 2012
Date of stay: October 2012
Liked best: ALL of it!
Liked least: having to leave
Traveling group: Friends
Would you recommend this hotel to a friend?   Yes.
Recommended for:
Was this review helpful? Yes
This review is the subjective opinion of an individual traveler and not of Tripadvisor LLC nor of its partners. Tripadvisor performs checks on reviews.
Problem with this review? Thank you. We appreciate your input.

1 helpful vote
“This was the best and most comfortable place I[--]ve ever stayed in with the most spectacular view.”
Reviewed September 26, 2012 for a stay in September 2012
1
person found this review helpful

This apartment was absolutely perfect. This was the best experience I've ever had. The view from the balcony was the most beautiful scenery I've ever seen in my life. It truly was heaven there. The apartment felt like home too. Everything I needed was provided and it was extremely clean. John and Ursula were the most helpful and hospitable hosts I've come across as well. It was so nice to be walking distance from the village and the hiking spots. I highly recommend this apartment rental; it exceeded my expectations in every way.

Date of stay: September 2012
Liked best: The view from the balcony
Liked least: Everything was great
Traveling group: Solo Traveler
Your age range 35-49
Would you recommend this hotel to a friend?   Yes.
Recommended for:
Was this review helpful? Yes
This review is the subjective opinion of a Tripadvisor member and not of Tripadvisor LLC.
Problem with this review? Thank you. We appreciate your input.
Previous Next
1 … 8 9 10 11 12 …
Updating list...
Do you own a vacation rental? List it here.

Looking for a place to stay in Engelberg?
View all 291 vacation rentals