Located in the heart of the city next to the Duomo. Couldn’t be more central. Few rooms. Excellent staff and very well trained. Difficult to find fault. Annelisa is a star. She was outstanding. Housekeeping and F&B are excellent as is the bell desk team. Only caution - it’s a long walk when you check in so get guided properly. No second thoughts.

Trip type: Traveled as a couple
See all 551 reviews
Nearby Hotels 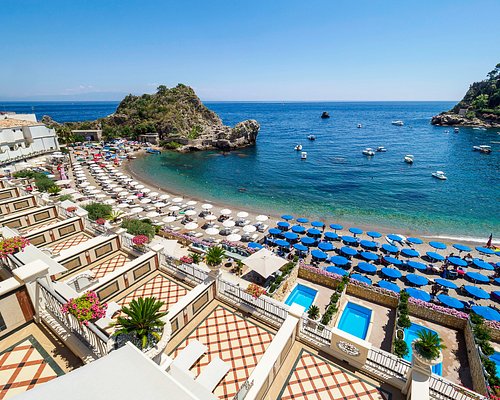 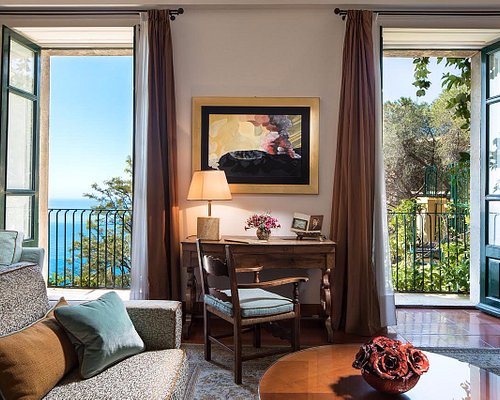 We last holidayed here in 2010,if my memory serves,not long after the hotel opened its doors for the first time.We were very impressed then but much less so this time around following a 7 day stay in late May.Our misgivings first arose on arrival when we were informed that both the restaurant and bar were closed "owing to a change of management"whatever that may have meant.We were disappointed and regarded this as a significant and unannounced loss of amenity as while there are plenty of other good places to eat at all levels in Taormina,we would not generally consider staying in a 5 star hotel which can only offer breakfast. The latter was good although the hotel appeared very quiet throughout the holiday and we barely saw more than a few other guests at breakfast.Only one member of staff coped with breakfast and while he did well he would have been impossibly hard pressed if the hotel had been any busier.Many positive points,however; excellent service from everyone especially the warm and friendly staff at the front desk who took time out to arrange a few events for us.An upgraded suite was much appreciated with good housekeeping and a very comfortable bed.The air con worked intermittently and did not always respond to its controls and even decided to function of its own accord on a few occasions even with the windows open!The El Jebel is near the main Corsa and, as such, our room suffered from excessive noise from a local bar/nightclub into the early hours on one Saturday night in particular.We went to the sea below Taormina via the cable car at the other end of town and whilst perfectly ok the lack of a pool at the hotel may be a limiting factor for some especially for anyone unable to handle the very steep climb from the beaches near Isola Bella. The staff coped well with what appeared to have been a local/area comms system breakdown on our last day which,for a while,prevented card payments being made!Would have given a higher rating but the unannounced lack of a restaurant and bar was a a bit of a let down and a few of the fittings were showing signs of aging.Top marks to the staff for their helpfulness.

This review is the subjective opinion of a Tripadvisor member and not of TripAdvisor LLC.
DedeFab47
London, United Kingdom
118276
Reviewed February 18, 2019
Cosy rooms with beautiful views on the town & sea

This could be a 5 stars hotel. But it is not. The rooms are very nice and full of character with their Moresque style. Also the view from the room is quite inspiring and relaxing. Also bathrooms are nice indeed, Other than that there was nothing else typical of a 5 stars hotel when we went, Are you looking for a restaurant inside the hotel ? Nope. Gym/Swimming pools? Nope. Luxury lobby for receiving new guests? Nope. It is worth to mention though that the people at the reception were v useful and always try to help. The hotel have a stunning roof terrace which was desert and unused during our staying. A real pity given the location of the hotel

This review is the subjective opinion of a Tripadvisor member and not of TripAdvisor LLC.
Fulva P
125
Reviewed January 13, 2019
Fawlty Towers.....

We booked for 5 nights over the Xmas and New Year at El Jebel because we were looking for a relaxing spa hotel and were impressed by the designation of 5 star Luxe.

What a let down.

The bedrooms were amazing and everything appeared to be perfect but within a few hours the cracks began to appear....

Breakfast was sparse and often the bakery appeared stale. One morning we took a glass of pineapple and it nearly poisoned my husband. It was rotten and tasted as if a cigarette had been left in the jug overnight! The inability to boil an egg was evident by the seven attempts made to guests seated near us. This was service more conducive to a 3star hotel with one staff member attempting to cater for guests, take orders, prepare the coffee and clear away whilst also refilling the buffet.

The service at the bar was equally comical. On New Year’s Eve we thought we would give the bar a try. We first asked for a cocktail (Old Fashioned) but were met with stares of incomprehension. The bartender shook his head. They did not offer cocktails. So we settled for a gin & tonic. Huge goblets arrived and I eagerly took a sip.....of pure gin....the bartender had completely forgotten about the tonic....tonic arrived in the shape of a huge bottle (flat) and the gin was topped up. When asked for more tonic to dilute the gin it took a further 10 minutes to find some....an absolutely comical moment or two....

The first impression of our room (202) was breath-taking. This was an impressive suite. The room was large and airy, the bathroom exquisite and the view from the window towards Etna is memorable.

But beneath the sheen was a bed that was rock hard to the point that each morning I had to begin with a Pilates stretch session, simply to get moving. The pillows were no better and when asked if softer or feather pillows could be found, this 5 star establishment found this an impossible request. An array of foam pillows arrived without success. Thankfully the sofa cushions eased the neck spasms.

An absolute requisite for this trip. This was the reason for choosing the hotel. We wanted to relax after Christmas and find a hotel to celebrate my husband’s birthday and to see in the New Year. We had not slept well for a couple of days due to the hard mattress and so we decided to go and relax in the spa. It was Friday afternoon at 4.30. The shock of finding the spa closed and filled with sacks of the hotel’s laundry was beyond comprehension. This was a 5 star luxe hotel with spa, except there was no spa.

I have travelled extensively and stayed in many wonderful boutique hotels but I’ve never experienced such a let down.

This was a very expensive trip and a real disappointment. All the more because El Jebel is actually a stunning property and its evident that the owners have spent a huge amount on the decor. But running a hotel is more than the facade and unfortunately that’s all that you get with El Jebel.

One saving grace was Annalisa who was simple amazing. This young lady did her very best to manage our disappointment, encourage us to remain positive and even made us laugh at some of the more farcical moments - thank you Annalisa!

I can only hope that the owners take a hard look at their guest offering and make a few changes. Until then I’d not waste my money if luxury and pampering are key to your trip to this hotel.

Room tip: The views over the front of the hotel were stunning.
Ask Fulva P about Hotel El Jebel
1  Thank Fulva P

This review is the subjective opinion of a Tripadvisor member and not of TripAdvisor LLC.
JRLKMM
52
Reviewed December 26, 2018
Epitome of a Boutique Hotel in the Center of Taormina!

Every part of our 10-day stay was outstanding. From the excellence and comfort of our rooms, to the thrill of the picturesque roof top terrace view of the shimmering blue waves of Mare Nostrum, to the private bar, to the wonderful breakfast room and dining room overlooking the colorful rooftops of Taormina, to the wonderful, superb and friendly staff throughout- this is a winner! We wouldn't stay anywhere else.
Lina, Karla and Jay

This review is the subjective opinion of a Tripadvisor member and not of TripAdvisor LLC.
danieljayl
Chicago, Illinois
2047
Reviewed November 13, 2018
Outstanding hotel with beautiful views.

A fantastic hotel located right in the middle of Taormina. Close to all the shopping, to the historical sites, and to restaurants. The service is wonderful and the staff caters to your every need. Beautiful hotel top restaurant with views of the town. Highly recommend.