$110
$61
View deal
Hotels.com$95
eDreams$100
travelup.com$110
View all 15 deals
Prices are the average nightly price provided by our partners and may not include all taxes and fees. Taxes and fees that are shown are estimates only. Please see our partners for more details.
819eileenh
Elizabethtown, Pennsylvania
12755

Loved this hotel! The views were amazing and the grounds more so! It has a quarry! Beautifully furnished and excellent staff! Lovely quote by Winston Churchill is on the door from when he stayed there. More

Show less
Trip type: Traveled with friends
Google Translation
Report response as inappropriateThank you. We appreciate your input.
This response is the subjective opinion of the management representative and not of TripAdvisor LLC.
See all 1,271 reviews
Nearby Hotels

Taking safety measures
We compared the lowest prices from 2 websites 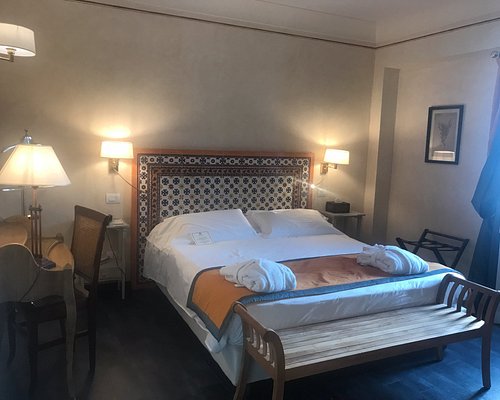 This is an incredible dive in a world of luxury and elegance one thought was only the realm of movies like “Il gattopardo”, but it isn’t. It is very real and just a short pleasant seaside walk to the most beautiful town in Sicily: Ortigia. Winston Churchill said his night here was the best rest he ever had, and it’s no wonder. Maybe the younger crowd will not catch the charm, but they will eventually come to appreciate how special places like this hotel are, in time. A must.

This review is the subjective opinion of a Tripadvisor member and not of TripAdvisor LLC.
Google Translation
Report response as inappropriateThank you. We appreciate your input.
This response is the subjective opinion of the management representative and not of TripAdvisor LLC.
Debbie461
Taunton, United Kingdom
2037
Reviewed October 7, 2019 via mobile
Lovely hotel but could have been perfect with a few changes

I would definitely recommend this hotel but a few minor changes would give this hotel the edge.
We stayed for 7 days in September.
Change the line green walls in the hotel.
Make the pool area more attractive by having more chairs and tables. A better menu. Better choice of drinks. Wine not just Prosecco.
Turn the radio off.
The pool lad to smile.
Outside the main entrance there is a lovely seating to have a drink. This is normally taken up by smokers and is quite unpleasant for non smokers. Move the smokers around the corner.
Also there is a lovely circled patio area. The chairs and umbrellas are left in a mess. Open this area up it is lovely.
Have a brush around the exterior of the hotel. There is some grubby areas.
Put a bench at the taxi pick up area.
Improve the bar service. There is generally no one there. The dirty glasses aren’t picked up until the next morning.
The breakfast is just right.
We used the lido once and then it closed! It was super there.
Don’t charge for pool towels.
Our suite was lovely, but did have some tired areas.
The hotel is a good 30 minute walk to the island and a busy walk. Staci was between 10 and 14 euros.

The building was once a villa built by an Italian baron and his wife, so on entering one can still picture what it must have been like before conversion to a hotel. The corridors and bedrooms, at least to our room and that of our friends, was rather dark, as were the rooms, but once the curtains and screens were opened the rooms were considerably better when the sunlight came in! A small French balcony, but not large enough to put a chair outside. Small bathroom, fridge, (no glasses provided, just plastic ones) no tea/coffee making facilities and for a four star hotel, the tooth mugs could have been glass rather than plastic as well. Nice pool area, but spoiled the day we were there by one of the guests playing music loudly. Towels collected from reception with a daily charge for this facility.

Good buffet breakfast with helpful and attentive staff. There are a few gluten free items, such as crackers, but not much. Fresh fruit also available as well as many cooked items from which to choose. The advertised happy hour was rather disappointing regarding the snacks on offer, a bit of cheese and mostly bits and pieces on bread or rolls. The hotel is about a five minute walk from the sea, from the hop-on-hop-off tourist bus stop and the city busy stop. Staff, polite, friendly and helpful.

Report response as inappropriateThank you. We appreciate your input.
This response is the subjective opinion of the management representative and not of TripAdvisor LLC.
Marie M
33
Reviewed September 22, 2019
Beautiful hotel, amazing staff

This was our second time staying 10 days, it is such a lovely warm and friendly hotel even though it's rather grand the staff are so welcoming and go above and beyond to help you, I fell and hurt my ankle while on a day trip in taormina, swollen and bruised badly by the time we arrived back at hotel, the manager of dining room went out of his way to get ice to help with swelling each evening, what this hotel somehow manages to do is make you feel extremely comfortable and at home, if you want a pristine modern apartment dont stay here, if you want a sense of old Sicilian grandeur and hospitality then this is the one, its simply beautiful x big thank you to all x

Report response as inappropriateThank you. We appreciate your input.
This response is the subjective opinion of the management representative and not of TripAdvisor LLC.
Karl L
813
Reviewed September 19, 2019
Very comfortable stay

We arrived at the hotel and our first impressions were very favourable, lovely historic buildings set in wonderful and very interesting gardens with lots of areas to sit and relax, plus a large well kept pool with plenty of loungers.
Our room was a large superior twin with a French balcony overlooking the gardens and towards the sea approximately 5 minutes walk away. The beds were very comfortable and the large ensuite was well fitted with bath and very good shower, the air conditioning worked well.
The Breakfasts were fine plenty of choices from fruit,cereals,breads, cheeses and ham. The coffee was very good , we did not try the cooked breakfast offerings of continental bacon, slices of sausage and scrambled eggs as it did not look very appetising. The staff at breakfast were very helpful and were quick to respond yo requests (we had good friend eggs one morning)
The reception staff were also very good and arranged several taxis for us. In the evenings there was a happy hour with excellent Cocktails and very tasty canapes which we tried several times.
The only issue we had during our stay was one evening when we arrived back from a long day out to find that a function was being held, apart from reception being manned there were no other staff available to serve us at the bar or anywhere to sit, eventually the guests went into the dining room and we were then able to get served, reception did try and find someone earlier to help us but they were obviously busy. My comment to reception was that as paying guests there should have been someone around to take our drinks order.
Overall a very good stay in a lovely hotel.