$150
$126
View deal
Free cancellation until 11/04/21
Expedia.com$129
Hotels.com$129
getaroom.com$150
View all 13 deals
Prices are the average nightly price provided by our partners and may not include all taxes and fees. Taxes and fees that are shown are estimates only. Please see our partners for more details.
Marty S
Princeton, New Jersey, United States
9962

Located in the Sassi

This hotel is located along the bottom of the sassi. I really liked the location. There is a great view of the rest of the sassi. The rooms vary in size from almost a closet to a very nice suite sized room. You need your walking shoes if you're going to be walking around. There are lots of steps to get up to the main level of the town. Although, I did see some golf carts taking people around.

See all 2,116 reviews
Nearby Hotels 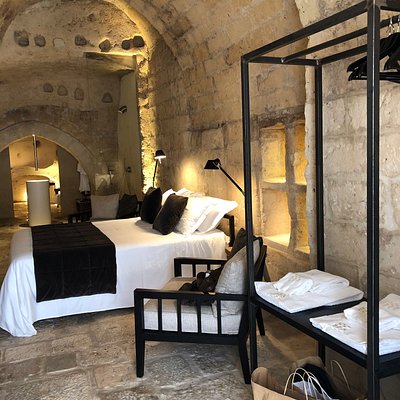 The hotel has brought together several cave rooms and formed a hotel. Good location and surprisinly spacious rooms. View out our balcony walkway great. Breakfast good. Staff helpful for tourist. Would return.

Room tip: The elevator is very tiny so plan ahead when checking out. It also seems to be influenced by the last person to push a button.
Ask Joseph P about Locanda di San Martino - Hotel e Thermae
1  Thank Joseph P

This review is the subjective opinion of a Tripadvisor member and not of TripAdvisor LLC.
Peter C
Winchester, United Kingdom
154105
Reviewed May 31, 2019
An extraordinary place

Matera is itself an extraordinary city, and the Locanda is situated in one of the areas of old rock dwellings, some of which have been brought together and made into a hotel. So you will be quite literally sleeping in a cave. (There is also a Roman bath/spa, but we didn't use it.) The room was furnished with an odd mixture of largely antique pieces, and the bathroom, though not large, was adequate. There are clearly some disadvantages to staying in a cave; it's not really possible to fit modern refinements like air-conditioning, and storage space was rather limited. But for character it's hard to beat.

The hotel has a small bar, which seems to be used largely by people coming from the spa. It has no restaurant, but there are plenty nearby, and the staff were extremely helpful in making suggestions and bookings for us. Breakfast was excellent, with a lot of local meats, cheeses and cakes and - extraordinarily - live piano music. However, we did have to see off one attempt to serve instant coffee,

I'm a hard marker, and on pure hotel quality this would rate 4 rather than 5, but it is the character of the place and the rooms that tips it over; we should have been very sorry to have missed it.

Room tip: There are some outlying rooms which will entail a trip back to the main hotel for breakfast. Be sure you know what you've opted for.
Ask Peter C about Locanda di San Martino - Hotel e Thermae
2  Thank Peter C

This review is the subjective opinion of a Tripadvisor member and not of TripAdvisor LLC.
LAEricson
Seattle, Washington
18871
Reviewed May 24, 2019 via mobile
Absolute Must!

This is an amazing chance to experience history. It is simply unbelievable they way they have preserved the authentic sassi feel and yet made the rooms welcoming with appropriate amenities.

One caution, it is a historical venue and the tiny elevator can only do so much, you WILL have to carry your bags up at least a few stairs if not a flight and the rugged cobblestones do not allow you to pull them even on the flat, but it is well worth the trouble.

This review is the subjective opinion of a Tripadvisor member and not of TripAdvisor LLC.
Philip S
Cape Cod, Massachusetts
246
Reviewed May 17, 2019
Room with a view

This was one of the most unique, best furnished hotel rooms I have experienced. It was evident that a lot of thought went into the renovation of these cave like spaces remake them into beautiful accomodations. Every room in this faciity was unique and was uniquely furnished. Not all rooms have a view to the Sassi, but ours did and it was stunning. Public spaces in the hotel, including the spa were also wonderful to experience.Given the pedestrian nature of the Sassi, this was a very quiet and peaceful place.

This review is the subjective opinion of a Tripadvisor member and not of TripAdvisor LLC.
World_Traveller914
Ocean Isle Beach, North Carolina
251110
Reviewed May 16, 2019 via mobile
Yabba Dabba Doo

This hotel is located in the ancient cave dwelling section called Sassi in Matera. Each room / suite is unique unto itself and are modernized cave homes from hundreds (maybe thousands) of years ago. The entire Sassi area has the feel of Jerusalem. The breakfast was outstanding and the service friendly and efficient. For me, it was the nicest hotel I have ever stayed at.