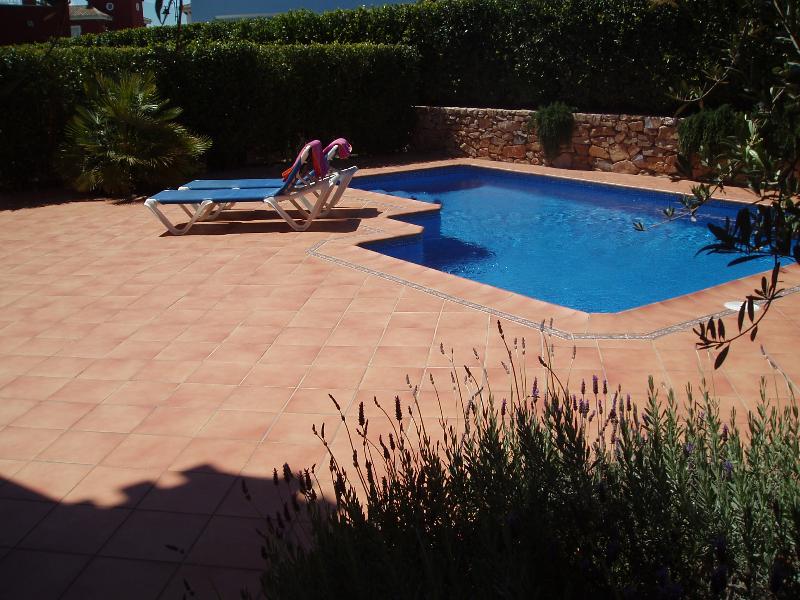 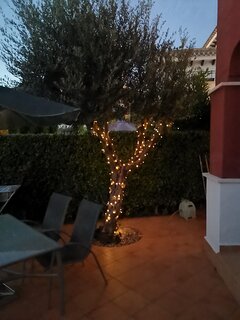 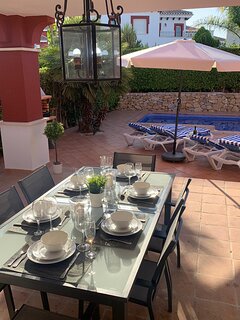 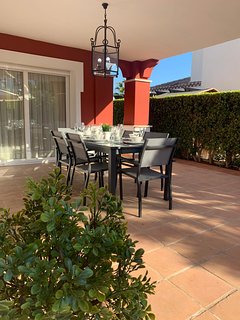 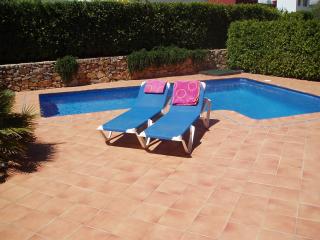 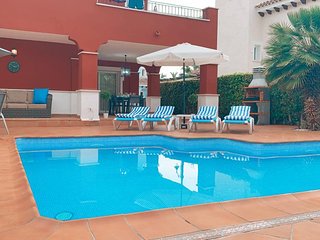 Excellent - based on 42 reviews
Write a Review

Had a great 2 weeks here with our family. Villa and pool spotlessly clean and very well equipped. Ray was great all the way through and really helpful The location is excellent for visiting Alcazares (The beach) which is very family orientated . The facilities on the complex are good and there is plenty of evening entertainment for all ages if you decide not to hire a car. The location of the Villa on the complex is very good and the pool area very private. Definitely one of the best Villa we have stayed in and would recommend it to all ages.

Date of stay: August 2014
Liked best: Pool Area
Liked least: Nothing
Traveling group: Extended Family
Would you recommend this hotel to a friend?   Yes.
Recommended for:
Was this review helpful? Yes
This review is the subjective opinion of a TripAdvisor member and not of TripAdvisor LLC.
Problem with this review? Thank you. We appreciate your input.

Communications were excellent with the owner Ray from the minute I booked the holiday.

The Villa was very clean and spacious with a fantastic pool.

The resort had a very good supermarket within walking distance of the Villa which was very handy !

Thank you to Glenda who managed the Villa she was very helpful and easy to contact.

Many thanks Ray for a lovely stay we would highly recommend your Villa :-)

Date of stay: August 2014
Traveling group: Young Children
Would you recommend this hotel to a friend?   Yes.
Was this review helpful? Yes
This review is the subjective opinion of a TripAdvisor member and not of TripAdvisor LLC.
Problem with this review? Thank you. We appreciate your input.

1 review
“Brilliant family villa in a lovely setting and great location”
Reviewed July 11, 2014 for a stay in May 2014

We had an absolutely brilliant time in this villa in May, everything we wanted for our family holiday. Villa is beautiful, clean and equipped as a home and the pool is fantastic - our 3 daughters (aged 5-6) absolutely loved it. The complex was so nice and quiet yet with all the facilities you need. Beaches are great too, loads to visit within 10min drive and none over busy or full of tourists. Couldn't recommend this villa and location more, we will book again for sure. Many thanks for letting us use it!

Date of stay: May 2014
Liked best: The pool
Liked least: Wi-fi would have been a brilliant added extra
Traveling group: Young Children
Would you recommend this hotel to a friend?   Yes.
Recommended for:
Was this review helpful? Yes
This review is the subjective opinion of a TripAdvisor member and not of TripAdvisor LLC.
Problem with this review? Thank you. We appreciate your input.

Amazing villa everything you could want and more beautiful setting excellent for families, couples and golfers alike. A true home from home lovely pool with alfresco eating. Plenty of dining and bars on complex. A great holiday at any time of year.

Date of stay: March 2014
Liked best: The villa
Traveling group: Spouse/Partner
Would you recommend this hotel to a friend?   Yes.
Recommended for:
Was this review helpful? Yes
This review is the subjective opinion of a TripAdvisor member and not of TripAdvisor LLC.
Problem with this review? Thank you. We appreciate your input.

We visited Mar Menor in July 2013 and thoroughly enjoyed our stay in Casa Jenella. This is a wonderful villa in a great location. The villa is in a quiet area but only a short walk to many of the amenities such as the shop, hotel complex, golf club house and driving range. On arrival we were immediately impressed by Casa Jenella and its surroundings. It is well equipped with everything that was promised in the property description – a very comfortable home that our family of 5 thoroughly enjoyed. A fantastic pool that is a great size and very private. And the sunshine was on the pool area almost all day, most importantly for us in the late afternoon/early evening. Our dealings with Ray were uncomplicated and we have no hesitation in recommending Casa Jenella as base for your holiday.

Date of stay: July 2013
Liked best: Property exactly as described
Liked least: Not applicable
Traveling group: Teenagers
Would you recommend this hotel to a friend?   Yes.
Recommended for:
Was this review helpful? Yes
This review is the subjective opinion of a TripAdvisor member and not of TripAdvisor LLC.
Problem with this review? Thank you. We appreciate your input.

Newcastle upon Tyne, England, United Kingdom
Reviewed August 13, 2013 for a stay in July 2013
Date of stay: July 2013
Liked best: The spacious outdoor area, perfect for bbqs
Liked least: bit hot upstairs
Traveling group: Large Group
Would you recommend this hotel to a friend?   Yes.
Recommended for:
Was this review helpful? Yes
This review is the subjective opinion of an individual traveler and not of TripAdvisor LLC nor of its partners.
Problem with this review? Thank you. We appreciate your input.

After arriving on a hot sunny Sunday afternoon to Rays villa we were greeted by the on set of a shkip and building materail out side. Next day they arrived nice and early 8.30 -5pm grinding mixing cerment, cutting tiles and the loud sound of Spainish music mixed with the dust coming over into our villa. We contacted Glenda Rays house keeper who advise us to use the pool at the hotel until she cotacted him in Englan as she had also seen the work and mess the privious week and INFORMED ray about how bad it was. We went to the pool and we had to pay 10 euros for two beds, bearing in mind there was 4 at the pool thast we had already paid for? We were later informed by Glenda that Ray would not move us he was going to call the owner of the villa to see what he could do. For the following few days we had this so we went out of the villa to the hotel pool, Ray called us to inform us the work would stop the next day and that he would give us a refund, I said we would discuss this on our return we wanted to enjoy some peace. Which was lovely when they were not there the estate is lovley and quiet that is why we booked it.
They arrived back the following week We left late on the Thursday evening thank god, AFTER SPENDING MOST OF OUR HOLIDAYS WITH NOISE an DUST EVERY WHERE which we were having to clean around the pool also inside the villa each day, were glad to come home. We spoke to Ray before the week we came out to his villa but there was no mention of building work as we would have looked for another villa, also he never attempted to call while we were there to see how things were going this was left to Glenda who got very stressed through this. On returning we contacted Ray regarding the offer of his refund and up to 0ctober 14th 2012 no response has come from him. If we had booked through a proper tour operater they would have had to inform us of the work, or get us another villa or offer a refund. Before you book this villa espeacially in September as every where is closed down for the season, most work takes place then, find out if there will be work going on as you will not get any satisfaction from RAY .

Date of stay: September 2012
Traveling group: Spouse/Partner
Your age range 50-64
Would you recommend this hotel to a friend?   No.
Was this review helpful? Yes
This review is the subjective opinion of a TripAdvisor member and not of TripAdvisor LLC.
I feel swilson has been harsh in the extreme concerning my 'customer service'. In point of fact I would go as far as to say I did far more than try to help them.
Let me set the scene……my guests arrived at my villa and it was my villa neighbours who were in the process of having their pool patio laid and as a direct consequence of the building work a lot of dust and a fair bit of noise was being caused. I received a phone call from my guests and they let me know of their dissatisfaction with what was happening.I told them that I would contact my neighbour and see what I could do to rectify the problem. Paul, my neighbour , responded perfectly and asked his contractors for the building works to be put on hold ( he didn't have to do this but he did ; so I was very impressed by his response and help to please my guests ).
This however, was not enough for them……Oh no! They wanted, in fact demanded me to move them into another villa……How on earth did they expect me to do this? I own one villa not the resort!. I knew then they where playing a 'game of what can I get back or out of him".I certainly did not offer them a refund for their holiday…. for a situation that was beyond my control; although I did offer them a weekend away at my villa as an apology for the inconvenience they had had to suffer.
When they returned I did receive a request from them as to a full refund and I tried to explain the problem of noise and dust for that time was beyond my control and I had no notification that it was to start. Believe it or not I am not responsible for the actions or obligations of my neighbours on the resort. I guess Paul thought that late September/October would be quiet and building works, on his property, would not be a problem. Needless to say the couple never took up my offer of a free weekend at my villa…..their loss and a headache less for me I guess.
However, they did kindly leave me a pleasant surprise !!!!………At the back of a cupboard; that is not used to store food, they left an opened pack of potatoes, discretely positioned out of sight ….these gradually went off... as you can imagine the degradation of these vegetables eventually attracted small flies……as a consequence the kitchen had an infestation of these little flies . I would like to thank my guests for that parting 'gift'.
Finally, as my other reviews suggest, I always try and do everything I can to make my guests feel welcome to our villa and I do help in any way I can to make their stay at Casa Jenella as pleasant as possible.
Thanks for reading my reply,
Ray
This response is the subjective opinion of the management representative and not of TripAdvisor LLC.
Problem with this review? Thank you. We appreciate your input.
Previous Next
1 2 3 4 5 6 7
Updating list...
Still can't find what you're looking for?

View all 2,647 Region of Murcia rentals

Looking for a place to stay in Region of Murcia?
View all 2,647 vacation rentals