Suitable for a business trip

The hotel is conveniently located rather close to the airport. Large lobby, good service. Very spacious room with a kitchen and a very comfortable bed. The hotel has an outdoor swimming pool and a top terrace with a bar (even if -unfortunately- I had not the time to pay a visit). The breakfast is a little bit poor in my opinion for such an hotel expect for the freshly squeezed orange juice and the tasty croissants. Car theme pervades the ambience. More

Report response as inappropriateThank you. We appreciate your input.
This response is the subjective opinion of the management representative and not of TripAdvisor LLC.
See all 532 reviews
Nearby Hotels 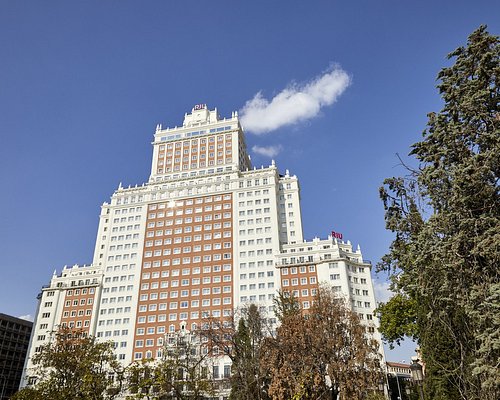 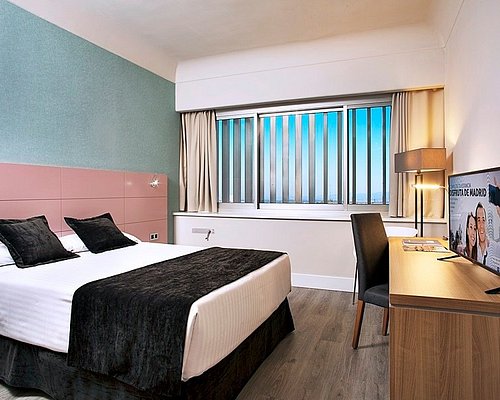 Hotel Chamartin The One
$71

The hotel was conveniently located for an event I had in Madrid but beware that it is in the middle of major roads and has absolutely no charm at all but this is not what you expect from this hotel. What you get and you expect in good wi-fi and responsive reception. These were good and helpful. They even came to pick me up the airport with free transfer, was a life saver as taxis are on strike in Madrid at the moment. However I hardly could not sleep this morning as someone took a shower at 6 am and it was extremely noisy. As I am speaking I hear someone snore like if this person was in my bed.
Yesterday I was served a cheese sandwich with cheese that I would through away as too dry and old... the end of the cheese you see the kind? and I love manchego usually... The barmaid who prepared the sandwich was friendly but he made the sandwich to order and probably knew what he was putting (either had no choice or thought I would not mind as a tourist not speaking Spanish)

The shower was the worst I ever had with cold (freezing) and hot (boiling dangerous) changes and no pressure to add to this.

My scarf was also stolen in the lobby apparently no cameras to see who took it...

How come they have 4 stars? It is more like a bad 3 stars. Sorry to say this but you need to redo the insonorisation and the shower system. I did not see roomservice menu although they claim to have this. My view was on a wall.... I like the fact the the floor is not carpet but wood.And when I asked for hangers because I had none they brought me some promptly.

Report response as inappropriateThank you. We appreciate your input.
This response is the subjective opinion of the management representative and not of TripAdvisor LLC.
Man-from-CFL
Sheffield, United Kingdom
8629
Reviewed January 7, 2019
Reasonable out of town hotel

Stayed two nights whilst attending a conference. Located in Las Tablas it is fairly close (20 minutes) to the airport and the Feria de Madrid convention centre (therefore avoiding the worst of the Madrid traffic) but probably not so convenient for the centre of Madrid.

The reception and bar area is full of a collection of old cars?? Check-in was fairly quick, but it took a little while to get a taxi each morning. I was upgraded to a suite, which was very nice, good modern design, excellent bed, effective aircon and a great shower. Good tapas restaurant a short taxi ride away but otherwise not much in the area, the hotel bar shuts fairly early as well. Reasonable selection for breakfast but they need some more orange juice glasses!

Report response as inappropriateThank you. We appreciate your input.
This response is the subjective opinion of the management representative and not of TripAdvisor LLC.
Duckcave
Beverley, United Kingdom
614
Reviewed November 16, 2018
Everything needs a re-think (except for the croissants).

Let me begin with what I liked about Hotel Dome Madrid. The croissants at breakfast we’re some of the best I have ever tasted and the Wi-fi complimentary. Now some of the more negative points, firstly the location. Getting to the hotel is challenging despite its proximity to a busy motorway. You have to perform a Scandinavian flick off to the highway to enter the hidden slip road leading to the hotel. This isn’t signposted, missing it means you have to go around the Iberian peninsula, which adds around 6 months to your journey. Once you get onto the slip road you approach the hotel and make a sharp right, smashing your wing mirror off but gaining access to the premises. You then have an argument with two intercom controlled barriers which allow you access down into the secure underground parking garage. Upon entering the garage you are greeted by pictures of cars, about 4 or 5 images that repeat. These images distract you as the other wing mirror is gently pried from your car as you navigate the parking garage.

Arriving in reception you are then welcomed by lots of car paraphernalia and actual cars. There is a Lamborghini Diablo in the bar, an Alpina near the restaurant, a Rolls Royce in reception. I have no clue why the hotel is themed in this way, the name does in no way allude to cars or as previously mentioned, a dome. I checked in with a mute receptionist “breakfast is over there tomorrow” he uttered and I go to my room. The corridor walls are pasted with yet more cars and motorbikes that are copies of the ones earlier, I wouldn’t mind if these were tasteful images, perhaps black and white, framed, but they are not. These are oversized, skewed, colourful cartoonish photos that have been cut out. It reminded me to the opening titles of Saved By The Bell.

The room is entered in the usual way, through a door which I for one am a fan of. I was in a so called suite and the space was large, oddly furnished and decorated by someone who has absolutely no idea. The doors in the room featured an extreme, zebra wood effect. There is a kitchenette and bathroom which were bright orange. One of the bedroom walls was wallpapered with a montage of cow hides. The flooring was a wood effect tile but not the aforementioned zebra wood, a real clash of the timbers. The furniture can be described as “very 90’s” with a glass dining table with two chairs facing a blank wall, a PVC sofa facing another blank wall, there is a desk, full length mirror, safe, cupboard and a television with no channels tuned in so this was purely decorative.

The kitchenette which as I have mentioned was dangerously orange and of a very low quality, think scout hut kitchen. It was furnished with a minibar with some things in, complimentary presumably as there was no price list (see if they get me on that later). There was a sink, microwave, a single hob, extractor and generous storage space. However the kitchen was completely superfluous, as there was no means to cook, no pans or cooking utensils so why put a hob in. There was no kettle so why put mugs, tea, coffee and UHT milk out. There were no plates or even a cutlery so why bother? Maybe these things could be acquired upon request.

The bathroom (also orange) had many towels of varying sizes and lots of toiletries. The towel rail placement was perilously close to the toilet, which meant if you sat on the toilet and moved your head you would brand a line into your cheeks. I was pleased to see the shower head was mounted on the wall above the bath and that it was powerful, but then displeased to discover that it was mounted at leprechaun height and stripped the hairs from my chest as I attempted to bathe. My room faced the motorway, and the bathroom window was huge and most importantly, clear. If it wasn’t for the cheese cloth curtain draped in front, the Spanish population could clearly see every contour of my grotesque, naked body.

The bed was the usual two singles pushed together, but relatively comfortable and clean. The pillows were filled with the hopes and dreams of the owners which immediately deflated when I came to rest. The air con seemed effective and silent but the noise from other rooms was impressively loud. Throughout the night I was able to hear conversations in the room next to mine, a phone vibrate in another but most alarmingly I began to muster genuine concern for the individual in the room above, as their trips to the toilet were numerous and eventful.

Breakfast in the morning was chaotic, lots of people in one place with meats and sweets available around the perimeter. The glasses to use for the juice were not much larger than a shot glass, impressively small, the coffee was dispensed via a push button machine but all of this was generally fine. The bar area was also fine if you ignore the visual gore of mismatched furniture and clocks with famous racing track named beneath. Drinks available were minimal, along with a sad bar food menu. It was not a place I felt comfortable staying for too long.

Around the hotel there is practically nothing, if you come to Madrid to experience Madrid then stay more central. If you come to Madrid to stay in a struggling 90’s car museum that smells of oil, then this may appeal. It most certainly was not for me and I wish I had not have been placed within it. Those croissants were good though.

This review is the subjective opinion of a Tripadvisor member and not of TripAdvisor LLC.
rachotappa
Bengaluru, India
10033
Reviewed October 31, 2018 via mobile
Good hotel

Was a good hotel to stay as regards to the ambience,size etc only negative aspect was the distance from the city center, rooms were large,clean ,with minibar, coffee kettle and the breakfast too was fairly good.

This review is the subjective opinion of a Tripadvisor member and not of TripAdvisor LLC.
Sidmannymalone
Kandern, Germany
5213
Reviewed October 20, 2018 via mobile
OK for a business trip

The Hotel is located outside of the city, close to the airport; about 15 minutes to the airport and from the city.
Rooms are OK, breakfast buffet is good.
The staff at the bar is very friendly.
Reception is a little slow.
I would go again.