$81
$78
View deal
Free cancellation until 12/08/21
Priceline$81
Expedia.com$81
Travelocity$81
View all 19 deals
Prices are the average nightly price provided by our partners and may not include all taxes and fees. Taxes and fees that are shown are estimates only. Please see our partners for more details.
lisahS3939UH
Rockville, Maryland
14593

Review of Hotel Axor Barajas
Reviewed May 21, 2019 via mobile

This is our third stay at this hotel on flights between Morocco and the US. It is clean, convenient and modern. The breakfast is good, although the coffee is skimpy and weak. I am not sure that we will stay there again because the shuttle from the airport is infrequent, meaning long waits after a tiring flight. The room was noisy because it was over the entrance courtyard where guests congregate to smoke and chat into the early hours. The shower floods the bathroom floor because the glass screen is too small. There were also too few thin towels in the bathroom.More

We appreciate your feedback and comments. Feel free to request a room with graden views or at then end of the corridor at your arrival. Shuttle bus runs every 30 minutes from T4, stopping at T2 , T1 and then at our hotel from 6:00 till 00.00) To came to the hotel you do not need to book, for the return trip (hotel-airport) we recommend to book at reception at the check in time. night transfers availables on request

Have a nice evening and Kind Regards

Report response as inappropriateThank you. We appreciate your input.
This response is the subjective opinion of the management representative and not of TripAdvisor LLC.
See all 1,637 reviews
Nearby Hotels 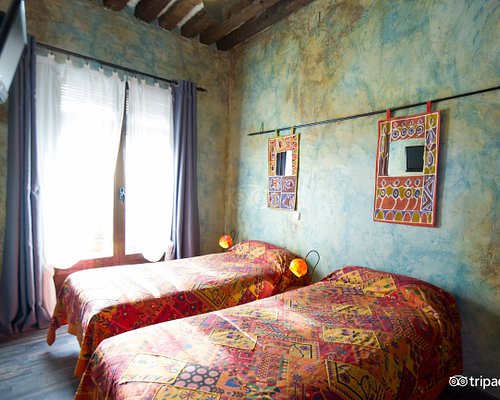 We stayed one nigh to catch a flight the following morning. They provide a shuttle to the airport which you reserve the night before. Picked us up right on time. The room was spacious and clean. No complaints.

Greetings from Madrid. Thank you so much for you kind recommendation

We are happy to hear you had a lovely stayed with us.

Report response as inappropriateThank you. We appreciate your input.
This response is the subjective opinion of the management representative and not of TripAdvisor LLC.
Alcides Martin G
61
Reviewed May 7, 2019 via mobile
Nice hotel, rude personnel

We arrived at the hotel around 12:30AM. Our crew consisted of 8 people. It was my 1st time there.
With a smile I went to the front desk to check in. I immediately noticed that the young woman speaking with me had a horrible attitude. Never smiled, and proceeded to give me the room keys. Gave me a piece of paper with instructions, and asked me if I had any questions.
I said, "yes, where are the ice machines?" She answered that although other hotels in Europe might have it, since most people ask for it, they don't have any. I replied as "no big deal". I thanked her, and left for my room.
I dropped my stuff and went to the bar to get ice before they close at 1AM. Can you believe they told me they had no ice, and the bar was full?
I realized they were not having a good time all around.
Once in the room, I realized there was no AC. I called, and was told to open the windows, because they don't turn it on at night. I said ok. It was a nice night after all.
At around 8 AM I was awaken by people talking in the courtyard below me. There was a lot of people. Some sort of conference going in, and the people were on break. I couldn't sleep. I was on the 2nd floor.
I called the front desk to get a different room, and after being out on hold while waiting for the manager, she told me it was not people, but I had to pack now and go downstairs to get my new key because they needed the room. I agreed, and was downstairs in less than 5 minutes.
Once there, I was told that nobody knew anything about it. While I was to about loose it, the manager showed up (the one I spoke with early on). She gallantly told the others that she has not done the change yet. That's when I just went off. I told them how I felt and left.
The new room was much much smaller, but I didn't care. It was on the 3rd floor and facing an empty field.
I hope you get a better experience. That was on April 30th.

We regret the impression you got regarding our staff and hope to have the chance to modify it soon we also apologize for any lack of quality during the stayed.

Have a great day and Kind Regards

Report response as inappropriateThank you. We appreciate your input.
This response is the subjective opinion of the management representative and not of TripAdvisor LLC.
nc27
Cork, Ireland
1913
Reviewed May 7, 2019 via mobile
Had to book elsewhere

I am in Madrid at the moment for 2 weeks on business I was hoping to stay at the Axor as I had read some very good reviews on here. Weather has been very warm and hot considering it is the Summer time here , I was hoping to use a swimming pool while I had some down time but when I read that it was only open at the Axor mid June I had to book elsewhere. This is such a pity as the Axor would have been ideal being so close to the shopping mall. May I would consider Summer season so this should be looked at for further as I know this will out off people staying here

Thanks for your feedback that allowed us to clarify that summer outdoor pool is not open at this time of the year. It may be open at the end of May, we will be happy to wellcome you thenn

Report response as inappropriateThank you. We appreciate your input.
This response is the subjective opinion of the management representative and not of TripAdvisor LLC.
luigicorb
Monza, Italy
13056
Reviewed April 30, 2019 via mobile
Different twins

Side by side with Axor Ferias, identical in structure..but different. We had a very large and comfortable room, a nice dinner and everywhere a wlcoming staff. The vote is the same..but we know where to stay if we will have to be back.

Greetings from Axor Hotels,
Thanks for staying with us. We work hard to make our guests happy and appreciate your feedback!
Kind Regards

Report response as inappropriateThank you. We appreciate your input.
This response is the subjective opinion of the management representative and not of TripAdvisor LLC.
Chris G
Derby, United Kingdom
318148
Reviewed April 27, 2019
Super clean room 504, smart location near to Airport

2nd visit on work. I like the simplicity of this hotel. Only small bar, not much to do locally. Breakfast very well presented buffet. The main thing is the room is very well equipped, super new feeling, clean and all the amenities you need for a short stay.

Greetings from Axor Hotels,
Thanks for staying with us. We work hard to make our guests happy and appreciate your feedback!
Kind Regards