Review of Comfortable with terrace near La Concha beach WIFI 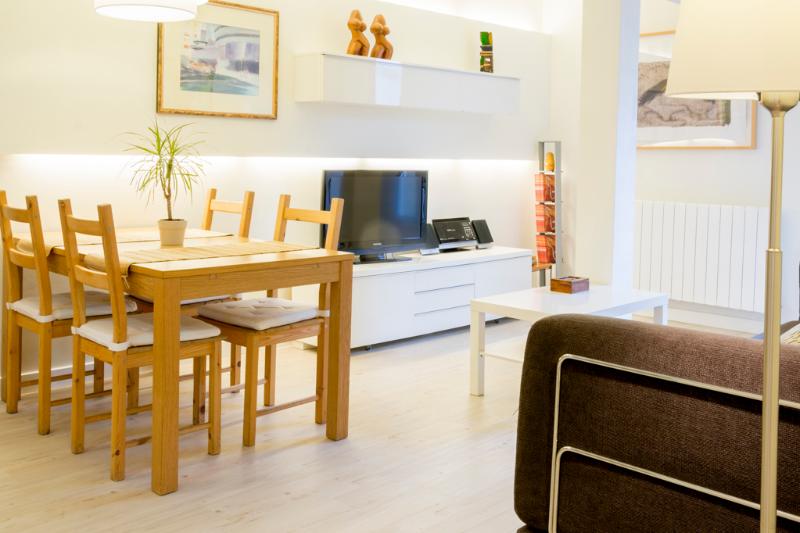 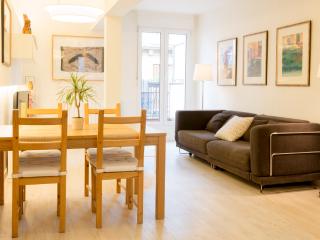 Excellent - based on 32 reviews
Write a Review

Sooooo.... We arrived in San Sebastian without a hiccup. The very sweet rental manager was waiting our arrival outside. We were marketed a "luxury apartment" but when we arrived it did not seem that was the case. But let's start with the positives: close to beach, nice property manager, bright apartment.

Some of the things that we had problems with on our stay were the loud noises outside and within the apartment building. There is a large bar directly across the street from one of the bedrooms (in our case it had a 2 year old in it) that sounded like it was right outside of the window. We were told this was an unusual case. In the building we also had construction which must have been right above our heads perhaps? It kept us awake from 8 in the morning (which was at that point 2am for us traveling from the East Coast) and only added to the lack of sleep from the bar next door. When we asked the property manager if this would continue during our stay she said it was ending the next day at noon. That was not true, and it continued during the day for our whole stay (except Sunday). Then the property manager asked if she could let someone into the apartment to look at the boiler while I was in the apartment alone attempting to study. I didn't feel like I had a choice but after 30 minutes of them banging away and having my timeout from vacation to write a paper sabotaged I had the workers call her to come upstairs. We were paying big money for the apartment and could not stand to be in it.

The apartment also has very creaky floors. Water pressure is okay. The shower tubing in one bathroom broke during our stay. The first night my bed broke as I got in it-- it has this piecy plywood frame underneath that has caved so much that the ends don't quite always make it to the other side. That meant that myself and my hubby slept on a U-Shaped bed until morning when we could call the property manager. This was the same day the construction started at 8am and the bar.

Oh, we also only received 1 towel per person even though promised two... but the property manager did eventually bring up more. I asked two days before we left and she said she'd be right back but never turned up. The next day I asked again and she came up.

Oh, and the elevator is tiny and older. It is an older Spanish building so I suppose it's not a complete surprise but just be aware of that.

We were never offered anything to compensate for our troubles at this location. The property manager is really nice but she seems overworked and I don't think her bosses cut her much slack.

Date of stay: July 2012
Liked best: Proximity to beaches
Liked least: The rental
Traveling group: Extended Family
Your age range 18-24
Would you recommend this hotel to a friend?   No.
Was this review helpful? Yes
This review is the subjective opinion of a Tripadvisor member and not of Tripadvisor LLC.
Problem with this review? Thank you. We appreciate your input.

New York
Reviewed May 28, 2012 for a stay in April 2012
Date of stay: April 2012
Would I recommend this vacation rental to my best friend?
Was this review helpful? Yes
This review is the subjective opinion of an individual traveler and not of Tripadvisor LLC nor of its partners. Tripadvisor performs checks on reviews.
Hi Marty!
You have no idea how much I enjoyed meeting you and Micheal during the Human Rights Film Festival here in San Sebastian. Not to be corny, but your documentary really opened my eyes a lot.
I'm so happy you sent in a review, thanks so much. It was a joy to help out with you and your family too.
Hope everythings going well with the documentary and I wish you all the best in the future.
Sisi
P.s. I'm still in touch with Paco, he calls sometimes for advice on housing and things. :)
This response is the subjective opinion of the management representative and not of TripAdvisor LLC nor of its partners.
Problem with this review? Thank you. We appreciate your input.

Spain
Reviewed October 5, 2011 for a stay in October 2011
Date of stay: October 2011
Traveling group: Family with young children
Your age range 35-44
Would I recommend this vacation rental to my best friend?
Was this review helpful? Yes
This review is the subjective opinion of an individual traveler and not of Tripadvisor LLC nor of its partners. Tripadvisor performs checks on reviews.
Problem with this review? Thank you. We appreciate your input.

Melbourne Australia
Reviewed September 1, 2011 for a stay in July 2011
Date of stay: July 2011
Your age range 25-34
Would I recommend this vacation rental to my best friend?
Was this review helpful? Yes
This review is the subjective opinion of an individual traveler and not of Tripadvisor LLC nor of its partners. Tripadvisor performs checks on reviews.
Problem with this review? Thank you. We appreciate your input.

Florida
Reviewed September 1, 2011 for a stay in August 2011
Date of stay: August 2011
Traveling group: Family (extended)
Your age range 55-64
Would I recommend this vacation rental to my best friend?
Was this review helpful? Yes
This review is the subjective opinion of an individual traveler and not of Tripadvisor LLC nor of its partners. Tripadvisor performs checks on reviews.
Problem with this review? Thank you. We appreciate your input.
Previous Next
1 2 3 4 5
Updating list...
Do you own a vacation rental? List it here.

Looking for a place to stay in San Sebastian - Donostia?
View all 610 vacation rentals