The hotel has just been taken over by a fantastic couple: Andy and Kristina. It is spotless, they are wonderful hosts and the location could not be better.
They have totally renovated recently.
Highly recommended.
We loved our stay.
Incredible value for money.
Chris & Dee

See all 41 reviews
Nearby Hotels 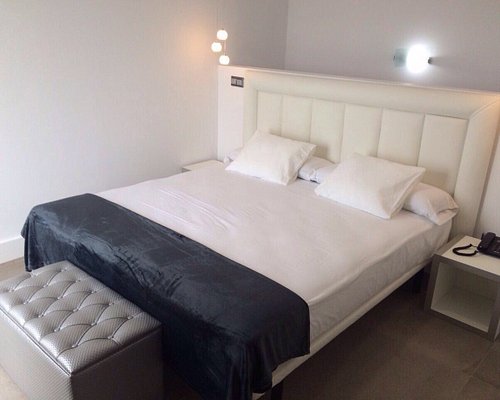 The room at this hotel was very comfortable, it's was air conditioned and cleaned every day. We were made to feel very welcomed during our stay. Andy on reception with very friendly and helpful and gave us good tips on getting around, there is a train line very close to the hotel that brings you directly to Malaga airport.

This review is the subjective opinion of a TripAdvisor member and not of TripAdvisor LLC.
zengrafix
Chatham, United Kingdom
3118
Reviewed August 4, 2015
Rip off at checkout - Warning!

I read the reviews about the smells and basic facilities so I went in with my eyes open. Firstly the positive stuff. Central location just 3 min walk to the start of the shopping streets. Less than 10 min walk to central square and train station and nightlife. 10 mins walk down to beach. Basic clean rooms with air con.

Now the negatives. The biggest and the rip off! I booked via Booking.com and thought my credit card would be debited on my checkout. I asked if I can change my method of payment onto another card. They said no worries. When I checked out they said they had credited my card with the amount I paid on Booking.com. I said "Oh I didn't realise my card had already been debited", yes he replied, but no problem I have cancelled payment. So great I think and hand him my new card. He says its 25 Euro more. I said why is it more. He tells me that the price has gone up now its in August and I pay in August. If I had known this I would have carried on with the initial payment. They were keen to help me change cards and I now know the reason why. I told them that this was not good customer service, but just got shrugging of shoulders. It has left a bad taste in my mouth and will not recommend this hotel to anyone now. Other issues. Very noisy group of Spanish in on Saturday night. They came back to their rooms at 6AM shouting, banging doors etc. It went on for a while. I told them to shut up. There must have been at least 10 of them. They continued to bang and shout for another 30 mins. It was right by reception so they heard yet did nothing. There is just one young guy who speaks limited English on staff. No other staff member speaks English. Communication is difficult. There is a smell, I found it in the hallway. No smell in my bedroom. So, be aware, do not change your payment method because they will jump on it quickly, then stick you for an increased charge.

This review is the subjective opinion of a TripAdvisor member and not of TripAdvisor LLC.
Kathy W
Portsmouth, United Kingdom
8154
Reviewed January 26, 2015
Little gem

We booked very short notice for one night as we were arriving too late to continue with our travel arrangements. This Hotel is a 5 minute walk from Torremolinos train station and although quite central it is very quiet. The hotel itself is small and clean and fantastic value for money, we liked it so much we stayed on our way back to the airport as well.

This review is the subjective opinion of a TripAdvisor member and not of TripAdvisor LLC.
kulmalukko
Jyvaskyla, Finland
7999
Reviewed July 2, 2013
Clean and comfort

Our double room with own bathroom cost total 38 euro per night. The breakfast is included in the price. The hotel is small and the employees are helpful.

In our room were air-conditioner, TV, chairs and closet. Our room was on the street level, but there were not noise from the window.

This review is the subjective opinion of a TripAdvisor member and not of TripAdvisor LLC.
mortz1
Leeds, United Kingdom
1211
Reviewed November 5, 2012
Good value

Hotel rooms are basic and clean,the hotel serves a coplimentry breakfast continental style,tea coffee toast buns cakes hot cho late,ceareals,fruit juice.The hotel has a swimming pool and sun terrace above the hotel but you need a key to access it ask at reseption for it and you need to go to up on the roof to use it.A nice hotel for the money not ideal for kids but couples defo. near reastraunts bars ect.

This review is the subjective opinion of a TripAdvisor member and not of TripAdvisor LLC.
View more reviews
PreviousNext
123…7