I have pretty high expectations of a Renaissance, and there were a few disappointments on this trip. There was a terrible smell coming out of the bathroom drain of sewage. I’ve never experienced this before in a upscale hotel. Very stinky.

Also, the room temperature could not be regulated! It was so hot, and the windows could not be opened to cool off. The A/C was off in the hotel so we couldn’t even turn on the A/C to cool off.

Finally, the maid service for the room was disappointing. We even left a tip for the service, and they failed to restock the instant coffee and fresh cups. It’s just the little things that make a difference.

Otherwise, the property was very close to public transportation and met our needs. The bar service was great. More

Thank you for taking the time to provide your feedback of your stay at the Renaissance Duesseldorf Hotel.
I sincerely apologize that your expectations weren't met and that we didn't delivirer
I have shared your feedback with our management team to prevent these issues in the future.
Please do not hesitate to contact me if you have any further inquiries.

Report response as inappropriateThank you. We appreciate your input.
This response is the subjective opinion of the management representative and not of TripAdvisor LLC.
See all 649 reviews
Nearby Hotels 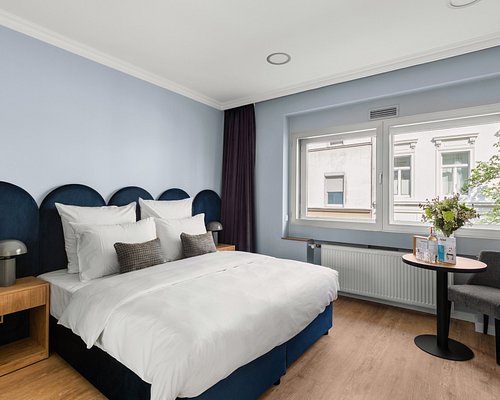 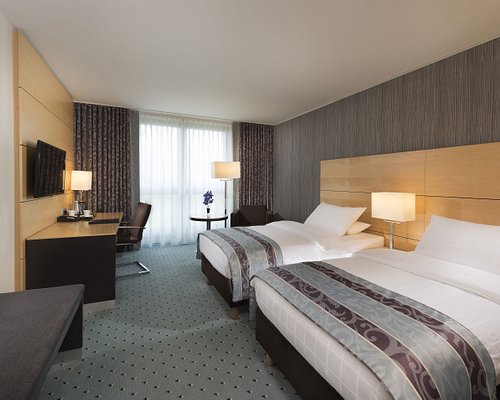 We reserved a room here, thinking it was the usual up-scale Marriott. Since it was the week during a massive medical device meeting (MEDICA), we did not really have a choice, and agreed to the $495/night. Location was OK, but a cab is needed to get anywhere near the center city. The hotel is, by American standards, a Motel 6. It is old, musty, and although it is clean, it shows the wear and tear. The air conditioning is likely 30 years old - requiring a thermostat, which is separate from the fan control (see photo). Thew hotel is old, dark, and depressing (as the rest of the city). The front desk people are very nice and helpful, but the concierge (the few times he was actually at his desk) sent us to the front desk, because "they knew the city better." REALLY??? What is the point of having a concierge? As a Lifetime Platinum member, I was expecting an upgrade - which they do not have. I was told all rooms are "upgrades". No kidding, this is what we were told! I asked if there were water bottles in the room - and was directed to the bar, where "I could buy some..." The bottom line: this was absolutely the worst Marriott hotel I stayed in for the past 20 years, and STRONGLY recommend against staying there, if you expect a hotel of the typical Marriott standards.

Room tip: The best room would be at a different hotel!
Ask Etherdoc about Renaissance Duesseldorf Hotel
5  Thank Etherdoc

This review is the subjective opinion of a Tripadvisor member and not of TripAdvisor LLC.
SpringZephyr
Singapore
179134
Reviewed December 1, 2018
Staff made my day

I'm seeing some very mixed reviews here on TA on the hotel. For my wife and I, we enjoyed our one night as we were transiting to our next stop and were not staying longer. We could happily have stayed on for more nights! The room was pleasant and had clean lines, everything works, and more than sufficient sockets for power. Perhaps in the next upgrade, Renaissance could put in USB ports by the bed/desk. Enjoyed having a low table next to the sofa as I like to put my feet up! Love the bath towels - they come all-white with a stripey "embossed" pattern. And what we like was the size of the room, we could happily open our suitcases (living out of them, as we were here for only one night), and not trip over them.

The breakfast had a good spread. And the gym a suprisingly good size.

This is more of a business hotel, given the location, as it is not near major tourist attractions, and we seem to the only tourists when we were having breakfast, the other guests were all in business attire. But having said that, this hotel is well located for various public transport options. We arrived via public transport from the airport, and we easily took public transport to Cologne and also to the Altstraat. Very convenient.

What made this stay so pleasant for us were the staff. Especially at the reception. The staff on duty at breakfast were also efficient and smiley too. We went to the reception a couple of times for help on our transport and touring plans and the lady on duty was so helpful and welcoming, it certainly more than made our day.

This review is the subjective opinion of a Tripadvisor member and not of TripAdvisor LLC.
Daoda2
London, United Kingdom
138145
Reviewed November 29, 2018 via mobile
It's a Marriott

Not clear what the point is of having a additional brand like Renaissance when it doesn't mean anything. Many Renaissance I've stayed at are indeed a step up from a standard Marriott, but many are not. The only way you would know this wasn't a Marriott property was because the toiletries in the bathroom were a different brand (and even then there was no conditioner). The stay was fine and the bed was comfortable, but it's not branded correctly and parts of the room were quite shabby/dated. The fan dial looked 10 years old.

Thank you for choosing to stay at the Renaissance Duesseldorf Hotel and providing your honest feedback on the Guest Satisfaction Survey.

Providing the highest level of hospitality is our number one priority and we sincerely apologize for falling short of meeting your expectations. As a teachable moment, we have shared your feedback with the appropriate hotel team to ensure the necessary guidelines are in place.

Once again, thank you for your valued feedback and we hope to serve you again whenever your travels bring you back to Duesseldorf.

Report response as inappropriateThank you. We appreciate your input.
This response is the subjective opinion of the management representative and not of TripAdvisor LLC.
ve_0517
Rotterdam, The Netherlands
15556
Reviewed November 26, 2018
This is the last time I'd stay there

Edit: I had to downgrade the rating.

I booked a room in Renaissance Düsseldorf via Marriott website. Unfortunately it was my mistake not to pay attention that my saved AMEX card in the profile was used to pay, while when paying with Visa, I should have a complimentary breakfast which otherwise would cost 20 EUR.

Unfortunately the front office manager insisted not to rebook on my VISA card, so that I don't get a comp breakfast. He insisted that it was prepaid rate so that it can't be changed. Actually, it's not that he can't change it, he just didn't want it so that I would have to pay extra for breakfast. Technically, all credit card transactions are reversible via POS-Terminal and it's just a matter of accounting paperwork to refund and charge on different card as the hotel doesn't suffer any disadvantage - they still get the full rate and actually even better as VISA merchant fee is typically way much lower than AMEX, especially in Germany. Called Marriott CSR in the US and they said the same thing but unfortunately they couldn't do anything either if the hotel doesn't want to - although I don't blame Marriott for this.

Room upgrade was not given either, the reception cited that they wouldn't provide any Gold member to suite upgrade (stick to Marriott rule only). As an extra insult, they said it is possible to (pseudo)-upgrade to "family room" which is not larger - which just means then there is no real upgrade. The room itself is just standard, quite OK but nothing special. The bathroom was old but at least it's clean. Room temperature during the night was too hot, I didn't really fancy it t.b.h. Here's the thing: when it comes to money, they are quite strict and pedantic with rules and so on, but when I asked for feather pillow in advance, they didn't pay attention for this and has to be delivered afterwards.

Room rate was typical low-season 60 EUR. But given the sturdiness of the manager, I wouldn't stay in this hotel ever again. The fact that they only gain mediocre ratings in several booking sites in comparison to another 4*-Hotel in the region might be explained by the way they hardly treat customers - no satisfaction guarantee as promised. Maybe in the future they would better go to Accor or similar chain. But I'm done with Renaissance Düsseldorf.

This review is the subjective opinion of a Tripadvisor member and not of TripAdvisor LLC.
tripkamaaina
Kailua-Kona, Hawaii
63104
Reviewed November 24, 2018
This place has really gone downhill....

I stayed at the Renaissance Duesseldorf multiple times in the past and had pleasant experiences, but my most recent visit was a huge disappointment.

First of all, I booked a room with a King bed. I received a room with two standard beds. Despite having premiere platinum elite status, I was not upgraded. Also, in the past I was given a snack and drink each night from the store because they don't have an executive lounge, but they don't even give the drink and snack anymore. And worst of all: They didn't give me my breakfast option! They offered the option of breakfast in the restaurant or 750 points per day, and I chose the 750 points per day. I never received the 3000 points I should have received for breakfast and I never received the 1000 points for making the "Green Choice" and turning down housekeeping for two days.

The hotel was impossible to get a hold when I noticed their mistake in not crediting me my points. Finally I got through to them via Facebook Messenger. The associate who responds to the Facebook messenger assured me that management had initiated the transfer, but weeks later, they never were credited. The only way I was able to get credit was to go over their heads and write to a Platinum Liaison at SPG headquarters, who finally credited me the points that the hotel tried to weasel out of giving me.

Suffice it to say, I won't be returning to this hotel. Both the Courtyard hotels in Dusseldorf have better management and they always credit you the appropriate number of points. Also, if you are looking for a more upscale place in the region, the Marriott in Bonn is fantastic with superb upgrades and a fully stocked executive lounge / breakfast.