NEVER BOOK THIS PLACE, ESPECIALLY IN... - Hotel Mons am Gotheplatz

I stayed in more than 100 hotels of various levels, and this is my honest review on this place (cba to call this a hotel):

See all 104 reviews
Nearby Hotels 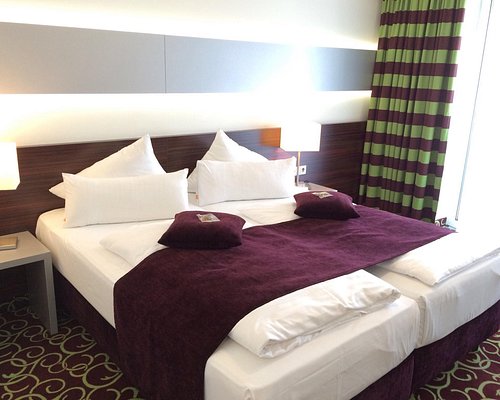 No any attantion to clients claims. Sure would never attend again and so my friends and partners.
The most owfull is staff do nothind to improove the situation with low temperature.

This review is the subjective opinion of a Tripadvisor member and not of TripAdvisor LLC.
liescodeluxe
Hazerswoude Rijndijk, The Netherlands
4213
Reviewed November 9, 2016
Simple but good accommodation

We stayed at the 4th floor and the reception was on the 3rd floor. The floor was very quiet and even though we were on the street side, the traffic could barely be heard. The hotel is very close to the city centre (1 stop by metro to Marienplatz or 10 minutes by foot). A great hotel with friendly staff and very suitable when you are on a city trip!

This review is the subjective opinion of a Tripadvisor member and not of TripAdvisor LLC.
Igors A
Riga, Latvia
29
Reviewed November 7, 2016
Worst experience in a lifetime.

The way the hotel sells it rooms is cheating. They sell a room with a shared bathroom, not saying that you don't have a toilet in your room. The only toilet available is on one specific floor. Terrible experience. Really poor hotel. Rooms are not clean. Walls are thing, very thin. In addition receptionist is just smiling at your complains for above.

This review is the subjective opinion of a Tripadvisor member and not of TripAdvisor LLC.
Dave S
London, United Kingdom
611
Reviewed November 7, 2016
They used my card twice and didn't fully refund - basically stole money from me

Do not stay with this hotel. They might steal money from your account and refuse to fully refund it.

I asked them for proof and they triumphantly forwarded my my booking from the previous year - obviously without reading it properly since it clearly stated the booking was 2015.

I pointed out their mistake and demanded they refund. They sent a refund but, due to currency fluctuations, I did not receive the full amount.

I told them of the currency fluctuation and demanded the rest. They never responded.

I reported a fraud to my bank, and I contacted the German authorities because I'm sure it must be illegal to retain my credit card details for a year after I stayed with them.

This review is the subjective opinion of a Tripadvisor member and not of TripAdvisor LLC.
Alison C
32
Reviewed September 25, 2016 via mobile
Dirty rooms, mixed experience

I stayed at this hotel during Oktoberfest and I doubt I would stay again. On arriving in my room it was shabby but seemed passable; even though I had paid a fair bit for it I wasn't expecting a lot as I know prices are greatly inflated during Oktoberfest. Then I started to notice things like mysterious brown splashes on the wall that hadn't been cleaned off, stains on the carpet, and dirty spots inside the drawers. Even the soap on the washbasin in my room had some suspicious dirty marks on its wrapper. I went into the shared bathroom and found that in a pretty bad state...The toilet was in a serious mess and there was a strong smell of urine on one side of the room. I had checked in relatively early in the afternoon so I decided to give them the benefit of the doubt and assume that the cleaners hadn't been through yet, and when I came back later things were in fact a fair bit better in the bathroom (though still not as clean as they should have been). The other shared bathroom was less shabby than the first and a little cleaner, but the bathroom sink was later decorated with a large hairball which was attached to the plug from the sink and appeared to have been accumulating there for some time.

That night I was unlucky enough to be in a room next to a couple who were screaming and swearing extremely loudly. I could hear every word, including threats of violence. I was scared on behalf of whoever was the weaker of the pair (and considered calling the police), but also quite literally too scared to leave my room to use the bathroom until there had been silence for quite some time. When I did finally leave I came across a man (one half of the couple) with blood/bruising on his face.

In the morning I explained the situation as best I could to the clerk on the desk (there was a language barrier as I don't speak German). He seemed quite concerned about it and was happy to let me change to another room. I don't know what happened to the couple as I didn't see or hear them again after that.

The next room was much nicer and cleaner...BUT even though I stayed on for another two nights the room wasn't cleaned again; they didn't even empty the bin. I also found a balled up towel behind the curtain which could have been there for a while.

It really did seem like cleaning was an afterthought rather than a priority here.

cons: lack of cleanliness, shabby rooms, a feeling that they're not really serious about running a business

pros: friendly staff, good location, possibly a candidate for one of those "hotel rescue" reality shows