$248
$171
View deal
Booking.com$225
Hotels.com$226
getaroom.com$248
View all 19 deals
Prices are the average nightly price provided by our partners and may not include all taxes and fees. Taxes and fees that are shown are estimates only. Please see our partners for more details.
hosseint683
Houston, Texas
6750

We stayed there for two nights. Wonderfully renovated the old hospital. Comfortable bed with a great view. It is pricy, so shop around for a bargain. I would recommend it. Staff were very polite and courteous. Short drive to the train station. More

Thank you for this nice review shared with the TripAdvisor community and for your warm recommendations.

We do hope to have the pleasure of welcoming you again very soon here in sunny Marseille - Capital of Provence.

Report response as inappropriateThank you. We appreciate your input.
This response is the subjective opinion of the management representative and not of TripAdvisor LLC.
See all 2,771 reviews
Nearby Hotels 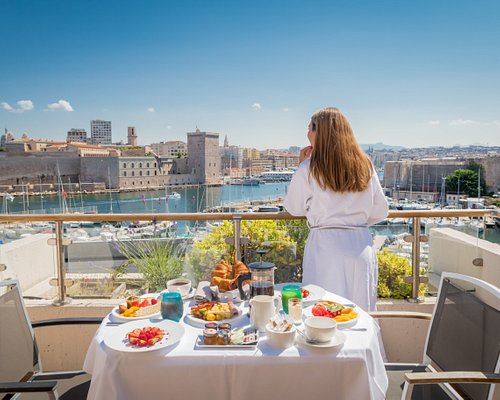 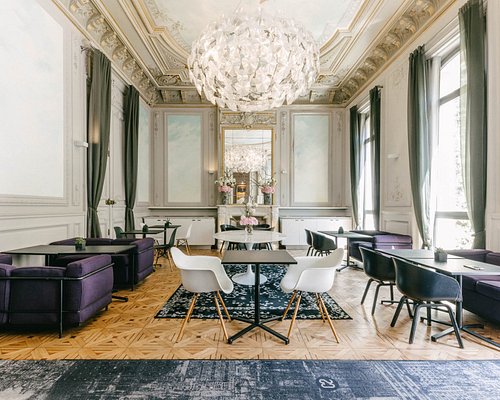 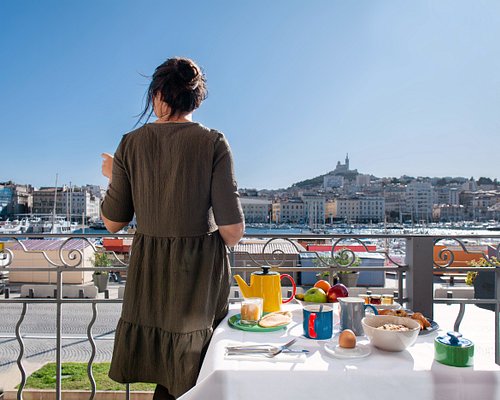 Loved this hotel wished we had stayed longer!! Beautiful view above the water looking straight at the church. Outdoor breakfast area with a spectacular view. The breakfast was amazing with pancakes,meats, eggs, yogurt, cheese, crepes and fresh squeezed juice and smoothies! Room as amazing! Clean and large,free wifi, a day least one movie channel in English which was great for winding down. Beautiful and easy walk to the harbor and restaurants. Valet parking was a plus! Felt safe as it is gated and hotel staff patrols at night. Wonderful hotel!

Thank you for this 5 stars review shared on TripAdvisor.

We are delighted to learn that your stay with us was a success and that you appreciated the breakfast served at Les Fenêtres brasserie as well as our stunning view and attentive service.

We do hope to welcome you again very soon.
Yours Sincerely,
Madelijn Vervoord - General Manager

Report response as inappropriateThank you. We appreciate your input.
This response is the subjective opinion of the management representative and not of TripAdvisor LLC.
Markus L
Bonn
147
Reviewed August 30, 2016
Rather a poor experience

First things first: The hotel itself is very nice and its amenities even more than adequate.

Unfortunately, however, the service at this property lags far behind. As stated by other hotel guests previously before, the friendliness of the people working at front desk is rather superficial, at least non obliging, even blasé.

While staying at this allegedly 5 star hotel we had breakfast and dinner on the hotel terrace on multiple occasions and we had been kept waiting each time.

One morning we were seated at a table that wasn't even cleared from the remains of the previous guests.

Not only that, we weren't provided with sufficient cups, flatware and napkins either. Instead we had to fetch the missing items from the buffet table ourselves.

Although the breakfast was offered buffet style, hot drinks and egg dishes were supposed to be ordered at the table.

Since after more than 30 minutes the eggs we ordered have still not be served and refills of hot drinks not offered we complained.

Instead of an apology, however, the waiter insinuated even that we didn't order those eggs.

Finally, the written order was still found, but we rather decided to leave.

Obviously, the maitre d' must have overheard our complaint, as he asked for our room number to offer us a credit for the service poorly or even not at all provided.

Meantime we almost forgot about the incident.

At check out from the hotel we would initially not even get a printed hotel bill, allegedly due to technical issues with the credit card machine, which made us kind of suspicious though. In fact, only after we repeatedly insisted we would finally receive a detailed receipt.

When we asked the front desk manager why the credit hasn't been respected he tried to make us believe this credit had already been deducted from a previous dinner bill.

Although this was apparently a false statement, what really crossed us was him treating us as we were just another naive foreign tourists visiting his country and telling us any lie just to make us leave.

Well, we finally left, but very likely we won't return to this poorly managed hotel either.

We would like to thank you for taking the time to share your experience with the TripAdvisor community.

While you appreciated the hotel itself and amenities, we are sincerely disappointed to read your experience amongst us did not meet your expectations and sincerely apologize for the problems expressed in your review. Be assured that your concerns have been passed on to the staff and management and that we are investigating the described occurrence with relevant colleagues and needless to say that they are not at all in our operating standards.

Our ongoing effort for amelioration is a key element for providing excellent customer service at any time.

Please, do not hesitate to let us know of your next visit in Marseille as it would be for us a great opportunity to change your opinion about our property.

Report response as inappropriateThank you. We appreciate your input.
This response is the subjective opinion of the management representative and not of TripAdvisor LLC.
Hadeer S
Boston, Massachusetts
910
Reviewed August 30, 2016 via mobile
Absolutely loved it

Great hotel love the room and the amenities the restaurant with the terrace overlooking the Basilica is lovely, The staff is extremely pleasant the room was beautiful and the bathroom was stunning.
Definitely worth upgrade to include the breakfast buffet on the terrace and ask the concierge for the tour around the city great walking tour with a lot of small old shops.

We are grateful you gave us the opportunity to welcome you during your stay in Marseille, it was a real pleasure to have you with us and to ensure you had a lovely time.

Thank you for mentioning how much you enjoyed not only the service of our colleagues, but also your room and the hotel in general. It is wonderful to read your feedback as our biggest aim is for our guests to feel at home when staying with us.

Report response as inappropriateThank you. We appreciate your input.
This response is the subjective opinion of the management representative and not of TripAdvisor LLC.
GillyK02
Cambridge, United Kingdom
258
Reviewed August 29, 2016
Fabulous Hotel

The Hotel Dieu is a beautiful hotel in an lovely setting, ideally situated for sightseeing, with magnificent views overlooking the port . On our arrival we were welcomed by Katherine whose English put our French to shame! Our room was magnificent with an extremely comfortable bed and huge bathroom and a lovely view of the courtyard which lit up at night. The staff in this hotel are what makes it such a special place, so welcoming and literally nothing is too much trouble. Food at the Hotel Dieu is a little expensive so we did not eat in the hotel, preferring to walk down to the vieux port and enjoy a drink or breakfast at a local café.

Thank you for this lovely comment shared with the TripAdvisor community.

We are delighted to learn that your stay with us met your expectation and we will of course share your gracious compliments with Catherine and the whole team.

We all look forward to the pleasure of welcoming you again very soon.

Report response as inappropriateThank you. We appreciate your input.
This response is the subjective opinion of the management representative and not of TripAdvisor LLC.
WicklowSpike
Wicklow
2832
Reviewed August 29, 2016
A Beautiful Hotel

We just returned from a six night stay at this wonderful property. The central location is perfect if you choose to explore the old port or the Panier district of the city.

Our room was lovely and the service was friendly and efficient. The terrace in front of the hotel is a beautiful location for breakfast but we were a little underwhelmed by the breakfast offering itself (and the small room in which the buffet is located). This is a pity as the overall standard of the property is so high.

A special word of thanks to the charming concierge Ms. Jiminez for her help, advice and willingness to share her wealth of local knowledge. The hotel is very lucky to have her!

Thank you for having stayed at the InterContinental Marseille - Hotel Dieu and for your kind comment posted on Trip Advisor.

I am delighted to learn that your stay with us was a success both at the hotel and in the city of Marseille, and that you fully appreciated the advices of our most talented concierge Kattia. As for the breakfast we are working on a new breakfast buffet which should be ready by the end of September in order to increasingly improve our valued guests' experience.

We hope to have the pleasure to welcome you again soon to have your feedback about this brand new breakfast buffet. Meanwhile we wish you a lovely end of summer.

Report response as inappropriateThank you. We appreciate your input.
This response is the subjective opinion of the management representative and not of TripAdvisor LLC.
View more reviews
PreviousNext
1…545556…