$108
View deal
Free cancellation until 05/29/22
$117
$96
View deal
Free cancellation until 05/28/22
Tripadvisor$96
Traveluro
Destinia.com$117
View all 18 deals
Prices are the average nightly price provided by our partners and may not include all taxes and fees. Taxes and fees that are shown are estimates only. Please see our partners for more details.
balilescugabi
Craiova, Romania
162

Close to rail station, clean but rooms are very small! I think there are maximum 50 centimeters between bed and walls. The bathroom is also very small.
Breakfast good enough - starting with 5:30 am!. Wi-fi was good.

See all 1,029 reviews
Nearby Hotels 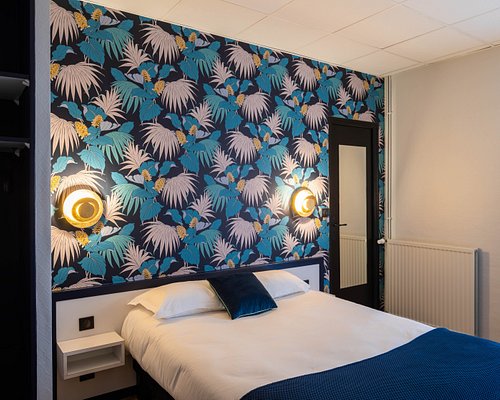 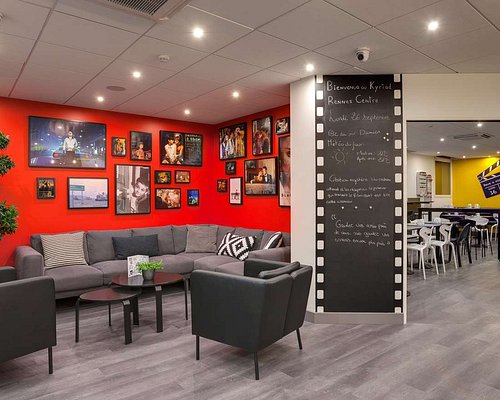 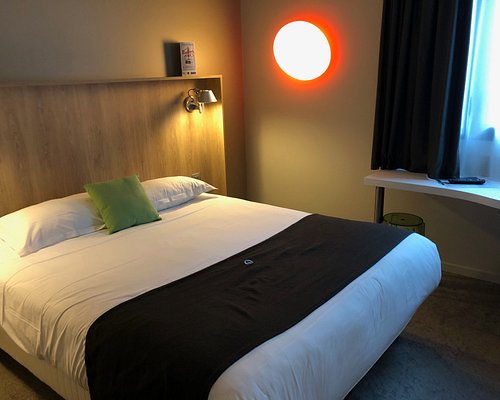 The team was friendly and welcoming, the room was nicely appointed.
The public spaces look a bit tired and unfortunately my room smelt of smoke.
However when I asked for an air freshener, they supplied one quickly and I managed to get rid of most of the smell.
So it was not too much of a problem.
There are restaurants around the hotel and even though the train station is being renovated, it is easy to find.

We thank you for your return; you appreciated the quality of the welcome and the professionalisme of the teams, the closeness of the station and the city center and we hope to see again you soon to the hotel ibis styles
With my thanks

Report response as inappropriateThank you. We appreciate your input.
This response is the subjective opinion of the management representative and not of TripAdvisor LLC.
jmarkob
Plouenan, France
6685
Reviewed May 9, 2017
Massive building works outside and tiny rooms

This is a difficult one to write. Mainly because there is nothing fundamentally wrong with this hotel and, in normal times, I may have rated it differently. However, I can only review what we experienced.

Let's start with the positives:

1 - Major Works. There are major works going on outside this hotel - this is not mentioned on their website nor when booking. They have been going on for a while and I understand they have over a year to go. The front of the hotel is accessed by an alley which has a corrugated iron sheet wall about 2 metres from the door. Due to this, there are a lot of little areas that are useful for local drunks to sit and drink. Whether, like us, you have small kids or not, this isn't a great thing.

2 - Major Works 2. Due to the works, there is barely any parking nearby. As I said, this isn't mentioned before you book or on the site. So you will be charged 13€ a night for parking at the hotel. You'll have no choice. The hotel will make no allowance for the fact that they didn't tell you that you wouldn't be able to park because of work that they didn't tell you about.

3 - Major Works 3. There are cracks appearing in the walls. One of the two rooms we had had a subsidence marker to monitor subsidence. It doesn't make you feel safe.

4 - Exterior of building. One side of the building is covered in graffiti. It's the side that has the gate for the parking - and also the side where there are drunks hanging out. It's quite a welcome!

5 - Tiny Rooms. I currently spend about three weeks a year in Paris for work. The two rooms that we had and the corridor to access them would be small even by Parisian standards. Tiny.

6 - Bathrooms For Exhibitionists. Frosted glass walls ensure that you can't go to the toilet or wash without being watched by anybody in the room. Unpleasant.

7 - Breakfast. The breakfast was mediocre. At one point, while I was eating breakfast, there was such a group of people waiting for bread that I went out to find the person who should have been looking after replenishing things to say that there was no bread. Cake was stale. The choice of meats was minimal. And, for the first time ever at an Ibis in France, there was nothing 'local' - no little thing that linked the breakfast to Brittany or Rennes - and that's sad because it's a nice touch in every other Ibis. And someone needs to check the fruit in the fruit bowl - some of it is actually mouldy. And when someone tells you that there is no milk in the coffee machine, the answer is not 'No, there is milk in the coffee machine' and nor is it, when you check and see that there isn't, 'oh'. The right answer is 'Thanks for telling me, I'll sort that'.

Would I stay again? No.

Would I recommend it? No.

There are a lot of better options in Rennes.

Room tip: Be aware of the size of the rooms (they are tiny) and the subsidence cracks.
Ask jmarkob about Ibis Styles Rennes Centre Gare Nord
1  Thank jmarkob

Thank you to have taken time to to put your return. You appreciated the quality of the services in the hotel, the cleanliness and the services of the hotel. At the level of the breakfast, you note an inattention and your remark is going to to allow us to to improve this point; sincerely Yours concerning. The works of the station, I reassure you they are in terminal phase because they began for several years (there was certainly a concern of understanding). We hope to see againyou soon when we shall have a just terraced garden in front of the hotel

Report response as inappropriateThank you. We appreciate your input.
This response is the subjective opinion of the management representative and not of TripAdvisor LLC.
DKCO
Brentwood, United Kingdom
13747
Reviewed May 8, 2017
May be a great hotel but not until the massive construction project in front of it is complete!!

Stayed here with friends in two rooms. Rooms overlooking the front are very small indeed. They also overlook a building site constructing the new metro station and re building the existing SNCF Rennes station. There are three tower cranes within 50 m of the hotel and constant noise during working hours. I also saw large cracks in the ground floor masonry walls inside which were extremely worrying. Whilst I fully accept that the construction project is not IBIS' fault, they really should not be charging full rate for the rooms at this hotel during this time.....I understand this project has +\- 2 years left to run..... especially without warning potential guests that this work is being carried out. Whilst the staff were excellent and the breakfast very acceptable, the location very central, I would not recommend this hotel at this time....be warned don't stay here till the building work is complete. Additionally the area immediately adjacent to the hotel unfortunately suffers from a large number of homeless persons with dogs who use the area as a toilet ( the smell of human urine is constant) , smoke very closely to the hotel and talk loudly into the night. Come in IBIS, do the right thing and tell people the situation before they book !!!!

This review is the subjective opinion of a Tripadvisor member and not of TripAdvisor LLC.
BAM1953
Bloomington, Indiana
7725
Reviewed February 26, 2017
Great location, quiet, good value.

Our room was small, but comfortable & quiet. Great soundproof windows. Breakfast buffet was adequate: fresh-squeezed OJ, cereals, yogurt, breads, pastries, cold-cuts, cheese, mini-crepes, & a few other items. Hotel is directly across the street from the train station AND car rental offices - both of which we used. We arrived by train from Paris, then picked up a rental car when we were leaving Rennes to drive west.

This review is the subjective opinion of a Tripadvisor member and not of TripAdvisor LLC.
Owiedub
Rockledge, FL
5943
Reviewed November 5, 2016 via mobile
The noise of the Metro building works made this stay one to firget

This hotel is steps from Rennes station. The night I arrived was a holiday in France & my impression of the area was not good. Lots of panhandlers with dogs, hassling for money. The area around the station is in a mess as they are building a new Metro. The incessant noise of the works is why I can only rate my stay as average. It permeates everything even with the soundproofed windows firmly closed. The works seemed to go on until very late & one night through the night. They start at about 7am in the morning. So, if a good sleep is what you want, avoid this area. It is within walking distance of everything in Rennes.
The hotel itself is nice. My room was small but had everything you need. The shower was great with lots of jets, to help ease the headache from the works' noise! Toiletries are provided. There was a slight smell of stale water in the bathroom but it was spotless, as were the towels. There's a large TV in the bedroom with Bein Sports & Canal+ movie channel in English. Bed was very comfortable. There are no curtains only shutters on the windows. I feel like curtains might deaden the noise a little. There's a safe in the room & they leave bottles of Evian each day. There's also a/c but it wasn't on the first night. I didn't need it for subsequent night as the room was warm, I couldn't open the windows because of the noise. Wifi is free but patchy & slow.
Breakfast was magnificent. Lots of choice, fresh fruit, OJ squeezed before your eyes, yogurts, cheese, cereals, pastries and bread. Excellent coffee from a machine. The lady is very welcoming & helpful. It's a really good start to the day.
Hadn't much interaction with staff, I checked in online but I wasnt asked about my stay at checkout.
All in all I would recommend the hotel if it wasn't for the awful noise, which I suppose is beyond the hotel's control. Still when booking they don't tell you the noise is 24/7 or at least it feels that way!
In summary, in 2019, when the works finish, this will be an awesome hotel.

I read with attention your return. Our hotel situated ideally right in the heart of REnnes cannot actually prevent to a population which exists in all the cities (unfortunately for them) to walk but there is never had of concern in our district of the station
The day of your coming you were disturbed by the outside noise, also during a next stay do not hesitate to ask us for a room on the back if you are very sensitive to the noise. The works of the station take place only during day
The works do not take place during the weekend or exceptionally and in this case we put all our customers on the back of the building but our staff in the listening is always inclined to satisfy you completely