“Perfect Homely Apartmwnt”
NjdsXzQ0X2Rzdw==
other travelers have booked this property

Review of The Sapphire Suite, Luxury Apartment Birmingham, U 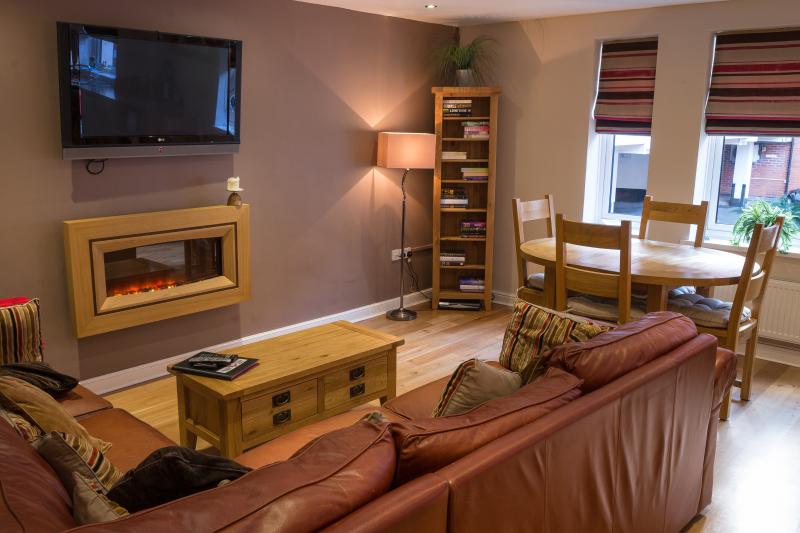 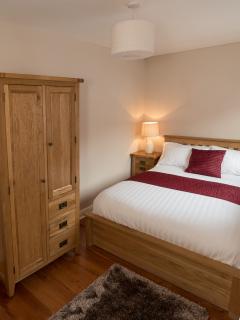 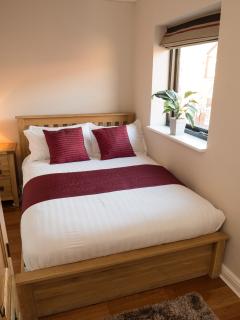 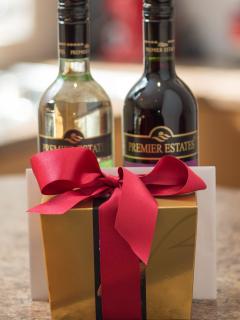 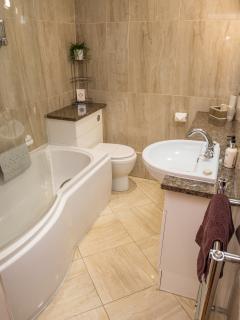 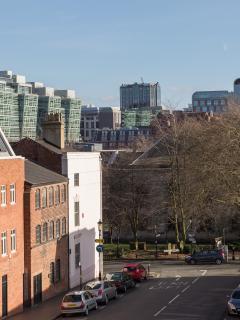 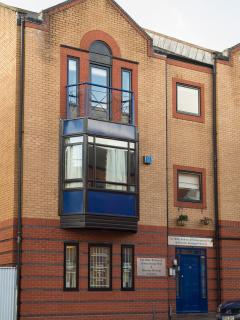 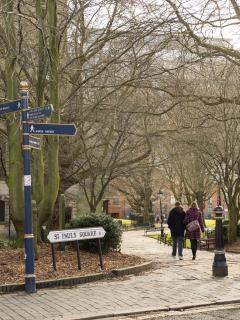 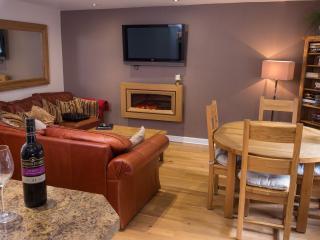 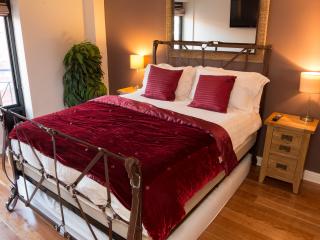 Very good - based on 32 reviews
Write a Review

2 helpful votes
“Perfect Homely Apartmwnt”
Reviewed May 3, 2018 for a stay in May 2018
2
people found this review helpful

A cut above the usual serviced apartments. Loads of space and up market decor and area. Very comfortable.

After staying in the Sapphire Suite for 29 days, our account of the apartment is very accurate.

I will start with the pros, although unfortunately there are not very many. The interior decoration is very well done, with fresh sheets and towels provided. The location is wonderful, lovely cafes, bars and restaurants and an easy walk into the city centre. The allocated parking spot makes arrival and departure a lot easier.

The booking was made 10 months in advance, thus many of the shortfalls could have been rectified if proper notice was given, as explained below. The feasibility of our party moving to alternative accommodation within such short notice, given the term we needed, was financially unviable.

This is not a luxury three bedroom apartment as advertised. It is a luxury two bedroom with an additional tiny, windowless box room. The ventilation and air quality is poor, and any fire-escape is redundant. Businesses still profiting from such setups are under huge scrutiny, due to air quality and health and safety issues. Had we known the “third luxury bedroom” was of this standard, we would have stayed elsewhere. I advise the host to make this apparent for future bookings.

A major-works notice was never issued to our party prior to arrival. This is in regards to the building work they are currently conducting in one of their lower apartments. This caused an incredible amount of discomfort and stress. An agreement was made between our party and the management for work to start no earlier than 10:00, which on some days was not adhered too.

Due to the stress it caused, with the relentless use of power tools and equipment, we were unable to enjoy the apartment during the day, and would endeavour to leave the premises as soon as the work started. The management handled this very poorly initially, giving a rather emotional response instead of handling the situation as an intermediary for us. We were promised that the remaining work was “just painting”, which of course was completely fabricated.

On several occasions the water to the apartment would be switched off, due to the ongoing building work. This would result in periods of no water and when finally switched back on, would cause the faucets to output a high pressure of water, covering the user and the surrounding area, very frustrating.

Due to our lengthy stay, one of the major assets of the apartment was the washing machine, still pictured on the Jewellery Quarter Suites website. We were informed a week before arrival that it had been switched to a dishwasher. The compromise given, was for us to drive to their other apartment on a Sunday and use the facilities there. Very poor.

The windows in the front two bedrooms are ineffective at blocking any road noise, I have read this on previous reviews that this would be addressed but this has not materialised.

The WiFi didn’t work on arrival, and we was asked to use the other apartments instead, which proved very slow due to the high level of users on the bandwidth. The WiFi was changed mid-stay, and was a vast improvement.

We arrived to find a broken toilet seat completely pulled from the hinges, this was replaced and apologies given.

The Sky box as advertised is no longer in use, free-view was the alternate which suited our needs fine.

It is unfair, and categorically wrong to expect paying customers to put up with so many mis-givings. I would advise any potential clients to look elsewhere if you want a pleasant stay in Birmingham.

Date of stay: April 2018
Was this review helpful? Yes
This review is the subjective opinion of a TripAdvisor member and not of TripAdvisor LLC.
Dear Paul

First of all we would like to thank you for taking the time to review the Sapphire Suite. We were extremely shocked and disappointed to receive your review and would like to address each point you raise.

We did inform you prior to arrival of the work occurring. We would have cancelled the reservation however this was not what you wanted. You also received a 40% discount for your stay. We do feel the rate you paid was very good for a 3 bed property in Birmingham.

We also feel the photos and description of the property accurately reflect the property set up and we are sorry for you did not find the smaller room suitable for your requirements. We will make this clearer. The property has been passed by building inspectors and health and safety and an issue with the 3rd room has not been raised.

We are sorry there were issues with the water, we have no record of you reporting this to as at any point so we were not aware this had occurred. Our apologies. It was also not reported by other guests in the building during that time.

We do not feel we handled the issue you raised with regards to noise poorly. You first reported noise a week after your arrival and In fact what you construed as an emotional response was actually compassion and understanding for what had occurred. We discussed that at the time and you even agreed that you had misinterpreted it. We care hugely about our guests experience which is evident by other reviews and as soon as you reported it we were concerned for you. We then did not allow the builders to work prior to 10am in the morning which is much later than most work men start in any job. They also only worked 3 days a week and this was mainly painting and tiling and other quiet work as the majority had been completed. We understand you spent most of your time at work during your stay as that was why you were in Birmingham. We were also told by the builders all the following work would be quiet as the work was coming to an end (only requiring flooring to be put down now) however we were later made aware that on one occasion for a few hours doors were hung mid morning that had caused noise. We apologised extensively to you at the time for this. We were also made aware that on one morning a few days prior to your departure they were hoovering downstairs and tidying up as work in the morning and that you came downstairs and were verbally abusive towards them. However again we apologised for the noise and gave you a bottle of wine.

There is so much development and construction occurring in Birmingham at the moment it would be difficult to 100% avoid any noise.
.
We agree that the washing machine was an issue for you based on the duration of your stay, so as well as offering complimentary laundry services we offered the use of another apartment on your day off every week. You declined both options.

We do not advertise as having sky so we do not see an issue here.

We also want to indicate that your party damaged a number of our sets of bedding. One specifically with a huge bright yellow round stain that could not be removed. (I would attach a photo here but only guests are able to do this)

Fortunately we have not received any other complaints of this nature during this time period and all of our other reviews are positive.

We greatly value our guests and their feedback so we are very concerned to receive your 1 star review and we are sorry for any difficulty you experienced during your stay. We do feel we worked hard to rectify them and make your stay as comfortable as possible.

Fortunately the upgrades to the downstairs apartment are complete with the exception of the floor which will be complete in the next week or so.

We really hope that anyone reading this review will understand that this does not accurately reflect the apartment or service we provide.

Kind Regards, The Jewellery Suites Management
This response is the subjective opinion of the management representative and not of TripAdvisor LLC.
Problem with this review? Thank you. We appreciate your input.

Lovely serviced flat in Birmingham's Jewellery Quarter, a pleasant and quiet quarter of town which has a great variety of bars and restaurants and is a short tram/taxi ride into the city centre. Impeccably clean, comfy beds, fluffy towels, and everything including toiletries was included. Would definitely stay here again!

Date of stay: April 2017
Would you recommend this hotel to a friend?   Yes.
Was this review helpful? Yes
This review is the subjective opinion of a TripAdvisor member and not of TripAdvisor LLC.
Problem with this review? Thank you. We appreciate your input.

Lovely apartment; short walking distance to centre. Everything you could want for in a city stay. Fresh clean bedding and towels. Bottle of wine on arrival along with chocolates and basics. Tea coffee and milk. Toiletries. Well equipped kitchen. Great parking. Lindsay always to hand to help. Great communication. Satellite TV and large tv in main bedroom.

Had a fab nights stay! Everything you need and much more. Great location on St Paul's Square which has lots of lovely bars and places to eat. Plus only a short walk into Birmingham City Centre. Really clean, well maintained and plenty of room inside. Will be staying again soon and telling others as loved my stay!!!

Date of stay: April 2017
Was this review helpful? Yes
This review is the subjective opinion of a TripAdvisor member and not of TripAdvisor LLC.
Problem with this review? Thank you. We appreciate your input.

Having stayed in a number of hotels, b'n'bs and holiday homes I have to say that the sapphire suite is a cut above the rest. The perfect place to stay. Nicely decorated, well maintained, spacious and above all immaculately clean. The suite is also very well stocked with everything I needed; towels, cutlery etc... communication with the owners was also excellent and it is clear they are trying hard to offer the best accommodation for the price in the area. Easiest 5 stars I've given.

Date of stay: March 2017
Was this review helpful? Yes
This review is the subjective opinion of a TripAdvisor member and not of TripAdvisor LLC.
Problem with this review? Thank you. We appreciate your input.
Previous Next
1 2 3 4 5
Updating list...
Do you own a vacation rental? List it here.

Looking for a place to stay in Birmingham?
View all 202 vacation rentals