Vancouver Island
Search for "{0}"
Post
Trips
Tip: All of your saved places can be found here in My Trips.
Inbox
Log in to get trip updates and message other travelers.
ProfileJoin
Search

“Breathtaking views”
ZndJXzFfOVV6
other traveler has booked this property 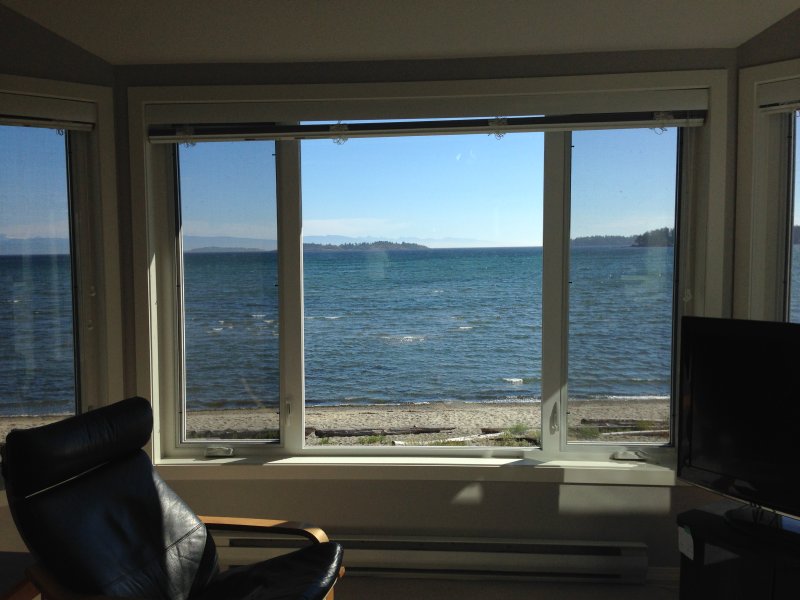 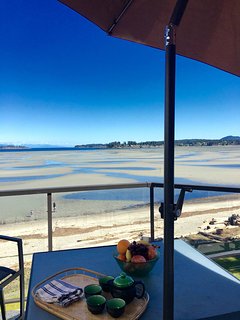 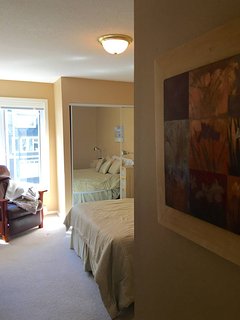 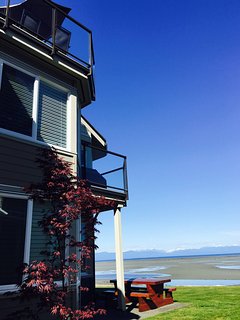 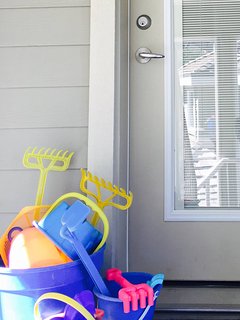 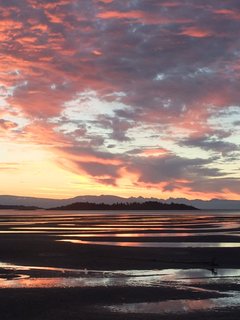 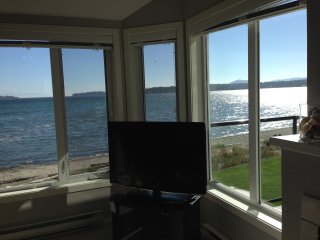 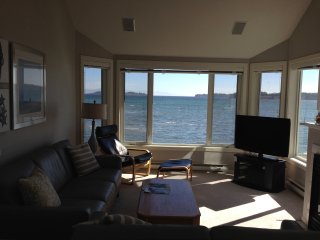 Excellent - based on 9 reviews
Write a Review

Absolutely loved our few days there. Well appointed condo, everything you could need or want. Very spacious. The view from both decks and living area, second to none. Great beach to walk, or over to the provincial park. Loved it, and will be back.

Date of stay: September 2016
Liked best: Views/location
Traveling group: Extended Family
Your age range 50-64
Would you recommend this hotel to a friend?   Yes.
Recommended for:
Was this review helpful? Yes
This review is the subjective opinion of a TripAdvisor member and not of TripAdvisor LLC.
Problem with this review? Thank you. We appreciate your input.

We were all very pleased with our choice of your vacation rental. Hopefully we can do it again next year. Everything was perfect. When you looked out the living room window at high tide it was like being on a cruise ship. At low tide you could walk the sand forever. What fun! Having our own barbecue was great too .Watching the sunset & the moon come up over the ocean made for wonderful pictures to remember our holiday Thank you.

Date of stay: September 2016
Traveling group: Friends
Would you recommend this hotel to a friend?   Yes.
Was this review helpful? Yes
This review is the subjective opinion of a TripAdvisor member and not of TripAdvisor LLC.
Problem with this review? Thank you. We appreciate your input.

We stayed for 8 nights and had wonderful vacation. Our group of five was made up of 3 adults and 2 young children. The unit is on the upper floor of a fourplex and is directly on the beach with just a lip of lawn separating you from the sand and ocean. We spent hours beach-combing, watching the tides ebb and flow, and enjoying the beautiful sunsets and sunrises. Sandy feet can be a challenge, but just fill the foot bath and leave with a towel at the bottom of the stairs as instructed and it's manageable - after all, you are on the beach!! Another tip - bring your lunch down to the beach or spread a blanket on the lawn and have a picnic! Lots to do in the area too - Tiger Lily Farm, Coombs, Paradise Park, Englishman River Park..... We built some great memories, thank you Donna for sharing your home with us, we hope to be back again soon!!

Date of stay: August 2016
Liked best: The view - This unit is directly on the beach
Liked least: Leaving
Traveling group: Extended Family
Would you recommend this hotel to a friend?   Yes.
Recommended for:
Was this review helpful? Yes
This review is the subjective opinion of a TripAdvisor member and not of TripAdvisor LLC.
Problem with this review? Thank you. We appreciate your input.

This is our fourth year in a row staying at Rathtrevor Beach with our family. It's just the most amazing location for young families. Every year we find new adventures with the kids and rediscover old favourites.

#3 Tanglewood is in the perfect location to enjoy the stunning beauty of Rathtrevor Beach. We would literally walk down the stairs in our bathing suits and not even take a towel or shoes. Your only steps away from the water.

The unit itself is clean and has mostly erything you would need to be your home away from home. My only complaints would be the oven was broken for our stay and was being replaced after we left. This made it difficult to cook some of my 2 and 6 year olds favourite staples and being so young they have a very limited diet. The kitchen utensils and pots and pans etc were sufficient but in need of an upgrade in some cases. We didn't find a toaster and found that odd.

Overall though out of the 4 places we have stayed in the Tanglewood complex this one was by far the best view and location. There was ample beds and it was clean and comfortable and family friendly.

Date of stay: August 2016
Would you recommend this hotel to a friend?   Yes.
Was this review helpful? Yes
This review is the subjective opinion of a TripAdvisor member and not of TripAdvisor LLC.
Thank you for your review Kirsty. We do not have the traditional pop up toaster but there is a combination toaster oven. We will continue to replace and upgrade condo amenities.
This response is the subjective opinion of the management representative and not of TripAdvisor LLC.
Problem with this review? Thank you. We appreciate your input.

My wife and I spent a wonderful week in this unit!
It's truly waterfront with beautiful views of the ocean and beach.
We would love to return and rent this condo again!

Date of stay: August 2016
Would you recommend this hotel to a friend?   Yes.
Was this review helpful? Yes
This review is the subjective opinion of a TripAdvisor member and not of TripAdvisor LLC.
Problem with this review? Thank you. We appreciate your input.

1 review
“What was the greatest about Tanglewood? Trick question, EVERYTHING.”
Reviewed August 14, 2016 for a stay in August 2015

Tanglewood #3 is a wonderful place to stay for a vacation with friends. There were six of us, and nobody died. But most importantly the space is large and not cramped at all. One of the greatest things about this location was having the beach as our back yard. [YEEEH] Being able to have access to the beach 24/7 was definitely a plus. Whether it was watching the sunrise, going for a stroll along the beach, making sand castles, or just gazing over the ocean from the balcony, the beach was always there for us.[like a good friend who will answer your calls at 2am in the morning]
The interior of the house was clean and comfortable. The interior decoration was quite aesthetically pleasing. The house also has built in surround sound which is perfect for watching movies on the hdmi compatible TV in the living room area. Though this might be irrelevant for some people, we found the wifi quite good as well. There were six of us using it at once on 5 phones, 2 ipads, and 2 laptops and it still held up.
Though we were unable to see stars due to the clouds, we saw the potential in the upper balcony to be a wonderful stargazing location. Did i mention there are two decks? THERE ARE TWO DECKS, and one of them has a easy to operate barbecue on it whilst the upper deck has a table with a parasol and chairs so eating outside on the upper deck is not only viable, but encouraged so you can soak in the view and enjoy time with the people you care about at the same time. [PRO TIP: you have to force the handle past the resistance to open the door to the upper deck]
One of the few flaws this location has, is that it's perfect and we have to leave. But seriously the sound of the ice maker in the refrigerator is the SPOOKIEST THING in the middle of the night.
The location of the resort itself is also one of the great things that Tanglewood has to offer. Minigolf is a walking distance away. As previously stated, the beach is right there. It is quite close to many sight seeing locations such as Coombs, Englishmen River Falls, Nanaimo and Cathedral Grove. Unfortunlately we were unable to go to hornlake caves this year due to our unpreparedness for the equipment required. But if that is something you are interested in checking out, remember to pack proper shoes and jackets.

Long story short: This is place is great. 10/10 would stay again

Date of stay: August 2015
Liked best: The views and beach front access.
Traveling group: Friends
Would you recommend this hotel to a friend?   Yes.
Recommended for:
Was this review helpful? Yes
This review is the subjective opinion of a TripAdvisor member and not of TripAdvisor LLC.
Problem with this review? Thank you. We appreciate your input.

Since year 2000, we've stayed at this lovely home many times and have been extremely impressed on each visit by the spectacular setting, the well-appointed condominium and the close proximity to numerous interesting activities. The condo is just a few minutes drive away from the mini-golf course, wonderful hiking trails and neighbouring spas. We enjoyed a variety of activities for all different age groups - cycling around Nanoose Bay, beach combing and skim-boarding at Rathtrevor, wading through the refreshingly clear water at Englishman River Falls and Little Qualicum Falls, enjoying heaping ice cream cones at Coomb's Country Market, and hiking up Nob Hill for glorious views. The condo was also recently refreshed with new paint and furniture. It was another memorable vacation and we can hardly wait until our next stay!

Date of stay: June 2016
Traveling group: Young Children
Would you recommend this hotel to a friend?   Yes.
Was this review helpful? Yes
This review is the subjective opinion of a TripAdvisor member and not of TripAdvisor LLC.
Problem with this review? Thank you. We appreciate your input.
Previous Next
1 2
Do you own a vacation rental? List it here.

Looking for a place to stay in Parksville?
View all 23 vacation rentals