$27
View deal
Hotels.com$27
Travelocity$27
CheapTickets$27
Orbitz.com$27
Trip.com$27
Tripadvisor$27
View all 13 deals
Prices are the average nightly price provided by our partners and may not include all taxes and fees. Taxes and fees that are shown are estimates only. Please see our partners for more details.
Jimi s
Tacoma, Washington
123

As a single female, I was treated very nicely. They picked me up and delivered me to the airport (for a fee), transported me to local attractions for free, went to the market for Coke Light when they didn't carry it, and were very gracious. But there are only Thai channels on TV, the internet was very basic, and the food was adequate but hardly inspiring. The location is very central to the attractions and the grounds are very pretty. The pool was nice and clean but also, in my opinion, dangerous for young children in that it is tiled and slippery with severe slants to deeper depths. If your main intent is to visit Tiger Kingdom and the elephant camp, it's a good locale and deal.More

Show less
Room tip: If you don't speak Thai, bring some DVD's to watch!
See all 27 reviews
Nearby Hotels 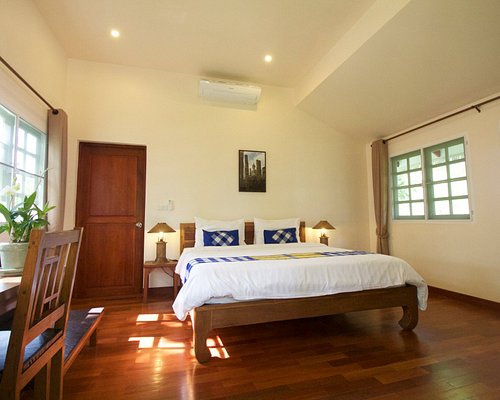 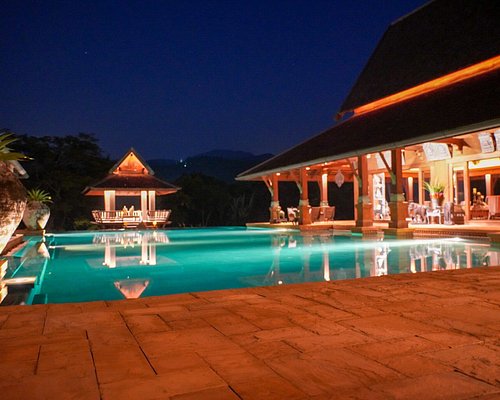 It's hard to know where to begin since basically everything was broken and the hotel staff were completely incompetent, so I'll start with the worst things first:

1. There was no hot water after running the shower or bath for 5 minutes or less. This means that the jacuzzi tub we paid for, which was also broken, could also only be filled with cold water. In essence, they charged us for a broken jacuzzi with no hot water.
2. The staff lied to us about how long fixing the hot water would take, saying that it would be back on "in 10 minutes" for 3 hours. We waited around and it was never fixed.
3. After waiting more than 3 hours, we took cold showers. To compensate us for the cold showers, they offered to give us a free ride to dinner at another resort (because their food was mediocre). Their hotel van BROKE DOWN ON THE ROAD because they DIDN'T FILL IT WITH GAS. They put us in a very dangerous (and preventable) situation because the van ran out of gas as we were driving in it on narrow, winding roads, and it took them over 40 minutes to send help. We had broken down on a winding turn, and someone could have hit us! By the time a new driver arrived, the restaurant we were going to was closed. Oh, and all of this happened on my 30th birthday.
4. The phone in our room was broken, so we had to go out of the room for anything we needed.
5. There was only one English-speaking person at the whole resort. This meant that any time there was a problem or we needed anything, we had to wait quite a while for him to appear.

To compensate us for all this shocking incompetence, they finally agreed (after I yelled at them) to return $1500 THB to us (less than the cost of one night's stay) and they gave us free rides into Chiang Mai the next day. However, they were 30 minutes late for one of the rides, resulting in my partner being late to his first day of class.

I would recommend staying anywhere else. I've been to hostels 1/6 of the price with better service.

This review is the subjective opinion of a Tripadvisor member and not of TripAdvisor LLC.
kostam
Belgrade, Serbia
18571
Reviewed August 16, 2012
Not a very good choice in Chiang Mai

We stayed here for 2 nights in July '12. At first it looked great but then we found a lot of shortcomings. We paid for the 3rd bed thru Agoda but they gave us only a 3cm thick matrace, very hard to sleep on. They made us pay for the 3rd breakfast since, they say, it was not included in the price of the extra bed. It was not a lot os money but it does not make you feel goos.
Located too far away from the cita it is only good if you wanr only to see the Tiger Kinhgdom etc. One way ride to the city was Baht 500!

This review is the subjective opinion of a Tripadvisor member and not of TripAdvisor LLC.
scott4wba
Ipswich, United Kingdom
39
Reviewed June 4, 2012
Great Hotel, Fantastic Staff

Great location next to all the major attractions in Chang Mai, Tiger Kingdom, Elephant Camp, Snake Farm, Monkey Centre, Botanical Gardens, ATV/Karting etc...Most walking distance or the staff will drive you free of charge any time you want to avoid taxi and "tour" fares.

Staff are genuinely the friendliest and most helpful we have ever encountered, they went the extra mile to ensure our stay was perfect. The hotel is as nice as the pictures and kept very clean. Pool/Bar area is great and the food is very tasty and well priced.

We both agree we will stay here whenever we visit Chang Mai.

This review is the subjective opinion of a Tripadvisor member and not of TripAdvisor LLC.
Bertrand A
Bangkok, Thailand
6038
Reviewed May 12, 2012
For a romantic journey in Chiang mai

Very beautiful resort. The staffs are so nice, you would like to stay a bit more than your original plan only for them. If you are looking for a quiet place in Mae rim away from the city but near many tourist attraction, Ruen ariya resort is really the perfect place. Forget everything just enjoy the time beeing.

This review is the subjective opinion of a Tripadvisor member and not of TripAdvisor LLC.
Pahin
Miami
13
Reviewed March 8, 2012
์Nice Resort

good location close mae sa elephant camp,tiger kingdom,water fall,monkey center,snack farm,
orchid farm etc.also this resort has a free transfer as discussed above.staffs were good relationship and friendly.the room was very beautiful and quite.I promise to stay there again
when I back to chiang mai

This review is the subjective opinion of a Tripadvisor member and not of TripAdvisor LLC.
View more reviews
PreviousNext
1…345