Firstly, the goods: Four Points is located in a very charming area of Mexico City known as Roma Norte. It’s easily accessible via a quick (approx. 30 minute) cab ride from the airport. Note: if you plan to hail a taxi into town from the airport, there are various cab operators at the ready to compete for your business as you exit Arrivals. Most are fairly decent and you can secure a fare for as low as 200 pesos, ~$15, though this ranges fairly dramatically.
In addn., in terms of some of the location highlights, there are lots of really good restaurants in the area – literarily one right after the other, so you’ll have plenty to choose from.

Secondly the attendants are quite friendly and very helpful, often going the extra mile. I wasn’t satisfied with the room I’d been assigned on check in and requested to be moved a couple times. They were quite patient through the process and happily accommodated me.

Thirdly, wi-fi connectivity is free both in public areas and in guestrooms. Bottled water is also free and fully stocked in rooms. The lobby is also a pleasant place to pass time. It has a bit of an artistic flair (some artwork on display when we visited). A center atrium also gives it a bit of a nice touch. Plus rooms tend to be on the very roomy side with super comfortable beds.

The not so good: Sadly, it seems the property may have a bit of a drainage problem. It’s immediately noticeable in the rooms (an unpleasant odor is present at times). I was upgraded to a mini suite (an appreciated perk) but these rooms have a Jacuzzi cordoned off by curtains almost in the middle of the room. Perhaps an interesting, almost creative idea, but nonetheless ill conceived – this may be contributing to the problem. The design flaw one could almost overlook but the odor was sometimes overpowering so this was a bit of a problem. Drainage in the bathroom was also problematic.

Overall, however, it was mostly a decent stay, all things considered, and good value for money.More 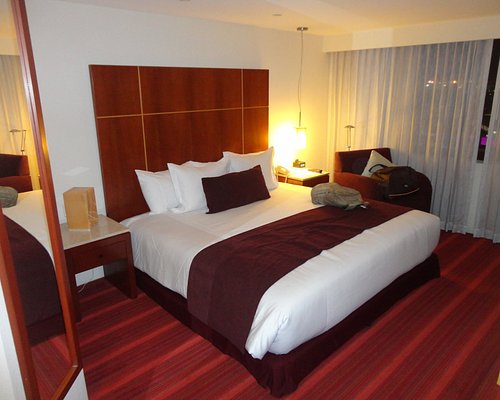 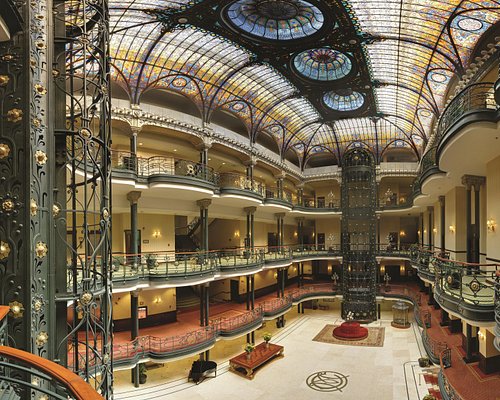 Having booked ahead for a two week trip across Southern Mexico, including staying in some less than glamorous accommodation, we thought we'd book this modern 4* for some rest and
relaxation at our Mexico City stop-off before heading further on our journey.

We got what we expected - modern, clean, quite minimalist, good 7th floor view of the gorgeous mountain backdrop to the otherwise less than memorable cityscape. On that front, this place is good value and were it not for personal taste, would be worthy of a 4* review.

However, you really could be staying in pretty much any other faceless modern hotel around the globe, and ultimately we missed the slightly less reliable and predictable but oh so more characterful bed and breakfasts in old colonial mansions or sand swept bungalows on the coast. To be fair the hotel probably projects itself as a business hotel rather than one aimed at the tourist market, but surely even businessmen get bored of staying the same style hotels around the world?!

Regarding the rooms, we were first offered one on second floor but the Wi-Fi kept disconnecting, if you need a good internet connection ask for a room next to one of their internet hubs. Also they had conferences taking place in the hall on that floor so not the best one for peace and quiet during the day. They found us a new room up the top without a fuss and we didn’t have any further problems.

The service generally was fine, the staff were friendly enough, but special mention must go to the incredibly friendly and helpful Miguel (or Mikey, as they call him at the hotel) on front desk, who will go out of his way to help you any way he can, including taking you to the nearest place to order travel tickets onwards, and helping you there with translations, if needed. Great job Miguel, thank you for your care, we appreciated your personal touch in a hotel otherwise lacking it!

This review is the subjective opinion of a TripAdvisor member and not of TripAdvisor LLC.
strobes
Santa Barbara, California
1319
Reviewed November 7, 2014
Great Location Great Service but the Room was Flawed

This was our first serious visit to Mexico City from San Miguel de Allende. We loved this part of town, Colonia Roma Norte. It is the bohemian area, many clubs, many young people, many incredible restaurants all within walking distance. We looked at the Stanza, the Hotel Milan and hoped for a minor "upgrade" by staying at the Four Points Sheraton. The hotel staff was very pleasant and spoke perfect English. However, what a disappointment the room was. For nearly $200 per night, the room was flawed in every way. The sewer (shower drain) often smelled foul, the light in the lou turned on the absolute loudest fan I have ever heard. Deafening noise from this "fart" fan. The lighting was poor. The heating/AC ventilation system just not did not work well. I just wanted the fan and you had to choose AC or Heat. There was a jacuzzi hot tub right in the room. Which wouldve been okay, interesting, except it was in the way, making it difficult to walk to the Lou in middle of the night. I actually tried it out one night, but it was poorly designed that I barely fit in the tub. It was often dirty and seemed to collect dirt and dust. What a waste of space. We could hear the elevator when it stopped on every floor. I wished we would've stayed at the Red Tree House B & B. It sounded much nicer, in the same area.

I´m really sorry about this bad experience in our hotel, unfortunatelly the smell was came form the outside, but for fortune is already solved, I wouls like to offer you a compensation for all those inconvenientes please feel free in contact to me.

Report response as inappropriateThank you. We appreciate your input.
This response is the subjective opinion of the management representative and not of TripAdvisor LLC.
MrMunzo
Katy, Texas
6453
Reviewed November 6, 2014 via mobile
Good deal for your buck

Modern and well located hotel. In the middle of Colonia Roma, well known for restaurants, bars and cafes. Rooms are clean, not sparkling clean but O.K. Customer service is decent. I stayed at the 4th floor and wi fi was pretty bad. The food at the restaurant was not impressive but there are a lot of dining options close by. The gym is small but it has all you need for a work out. Overall, you get what you pay for but there is definitely room for improvement.

This review is the subjective opinion of a TripAdvisor member and not of TripAdvisor LLC.
Cangar
Queretaro City, Mexico
7030
Reviewed September 16, 2014
Improving all the time

Have been staying here for last few years when I come to Mexico. Like where it is located. Used to be a Quality Inn. Since the beginning, they have always improved the hotel side. This time, had not been here in about a year. normally I come 6-7 times a year. They changed all the mattresses, pillows and sheets. Much more comfortable. Hotel staff still very friendly and helpful.

But now on the other side, the restaurant. Not only has that not improved, it went down in quality and service. the included breakfast is the same and fine. But lunch/dinner is another story. Although the level of hotel has gone up quite a bit, the restaurant's food has gone down in quality. I know it is a business hotel, and am not expecting gourmet food. The menu is adequate for what it is, What they serve you isn't. In a 700 peso a night hotel, I can understand. Not here.

Working and running around all day, I usually order room service. In about 5 times, I think they got my order right once. Once they had to go back downstairs 3 items. By the time I had everything, food was cold.

As far as hotel, hotel staff, they rate 5 stars. For the restaurant side, 2-3. That being said, I will continue to come back.

I've stayed at the Four Points Mexico City property twice now, and I intend to stay again if I should need a hotel in the DF on my next trip. The property is small, but akin to an Aloft property in the USA, with kitschy furnishings, a hipster/artsy decorated lobby, and an overall younger clientele feel. While not on the level of a W property, the Four Points is a very inexpensive option ($86 per night for two, prepaid) and in the most cutting edge neighborhood of the DF at the moment. Situated in Roma Norte, the Four Points is literally within a few steps of hot eatery spots such as Mog, Aurora, El Pendulo (Roma), Taqueria Frontera, Taqueria Alvaro Obregon, Los Sobrinos, El Diez, and Kitchen 6. On most nights of the week these establishments will have waiting foodies spilling out onto the sidewalk and street. In addition, the area is extremely safe (as is most of the DF for that matter). You'll notice regular police car patrols at all hours of the evening, customarily shining their strobe lights to give an air of safety to residents and visitors alike.

ROOMS. On both occasions that I've stayed at Four Points Mexico City, I've been upgraded to a Junior Suite because of my SPG Gold status, so I can only speak of these rooms. Situated along the X01 room line (401, 501, 601, etc.), these rooms are large and ample for couples. The one odd thing about them, though, is that they have huge sunken jacuzzi baths taking up a large floor area of the room (in addition to the standup shower in the bathroom). On neither occasion have I used the jacuzzi baths, and quite frankly think that removing them from certain (if not all units) would give the jr. suite a welcome boost in size and roominess. Possibly replace the area with a living room table and sofa? The jacuzzi bath aside, the rooms are nice and large. The shower does occasionally have a mildewy, almost faint sewer-like smell. Sometimes. As a regular traveler to the DF, I know that the city's sewer system is antiquated and as such its smell does permeate into all areas of the city, indifferent to class or status. The hotel is very accommodating in addressing any smell or cleanliness concerns if they are simply brought to their attention.

I will be back to the DF. And Four Points Mexico City remains at the top of my list in terns of location and value. Hasta lo proximo!

Room tip: Be mindful of choosing a room that is not close to a noisy ice machine. Also, if you are higher up, 4th to 6th floors, facing the main street (Alvaro Obregon) should not be a problem in terms of noise. The street empties out pretty much after 9:30pm nightly.
Ask inwoodcalifornian about Four Points by Sheraton Mexico City, Colonia Roma
3  Thank inwoodcalifornian

This review is the subjective opinion of a TripAdvisor member and not of TripAdvisor LLC.
View more reviews
PreviousNext
1…192021…52