CheapTickets
Trip.com
Expedia.com
View all 10 deals
Prices are the average nightly price provided by our partners and may not include all taxes and fees. Taxes and fees that are shown are estimates only. Please see our partners for more details.
Charl3s
London, United Kingdom
5393

After our bad experience in another hotel in Nakhon Phanom, we checked in here to spend the rest of our stay in more pleasant surroundings. We opted for the so called "VIP" room which has more space than the average room. Please be aware that the presented pictures on the prospect do not match the reality of the VIP room. The hotel itself is quite new. Therefore, everything looks quite shiny and good. Admittedly, the personell also cares for the cleanliness of the hotel. The room was basic and clean. There was even a flatscreen on the wall and a computer in the room. The free wifi worked well throughout our entire stay.
Since breakfast was inclueded in the room charge, we expected a nice breakfast on the first morning. However, we were a bit disappointed since the offered breakfast consisted out of toast in a tupper box and two jars of jelly. Well, we hate breakfast somewhere else instead. The hotel is quite noisy in the morning due to the cleaning personell and loudspeakers with easy listening music on every floor. This however were the only drawbacks of the hotel.More 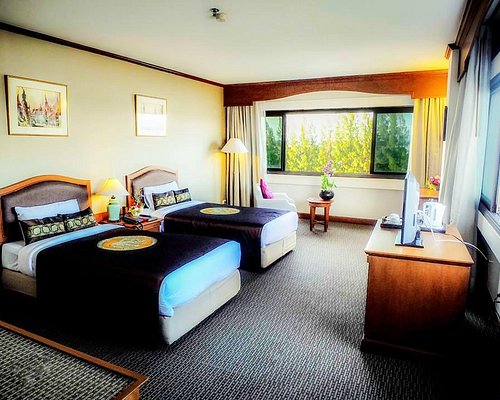 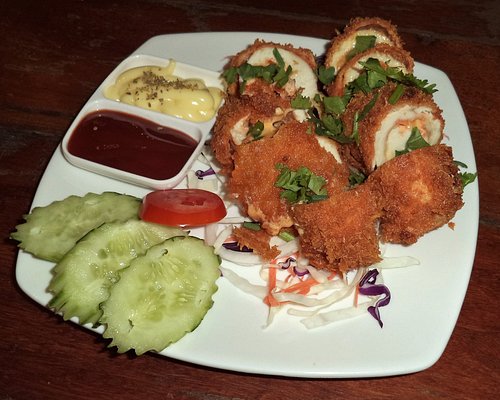 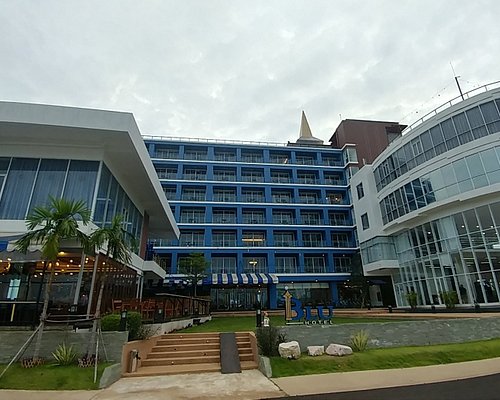 New hotel, clean and functional rooms. Nice communal area. Bike and scooter rental. Handily placed in the town, yet a quiet location (not all guests are as quiet, but this reflects the country not the hotel).
Rather basic breakfast, but at this value just go out and find something decent nearby.
Recommended for no frills.

This review is the subjective opinion of a Tripadvisor member and not of TripAdvisor LLC.
Zidane08
Thailand
78108
Reviewed October 25, 2012
Very nice hotel in the centre of town

This hotel opened in January 2012 and is in an excellent,quiet location near the centre of Nakhon Phanom.
There are plenty of eating and drinking options near to the hotel and a 7/11 just a couple of minutes walk away.
Its just over 5 minutes walk towards the clock tower and the riverfront and nightmarket are just 100 yards or so further on.
We were there when the riverside festival was on and the place was buzzing.
The hotel has 27 rooms (23 standard and 4 VIP).A standard,currently costs 550 baht and the VIP 750 baht.The VIP is about 25% larger with its own LCD TV and computer and a small sitting area near the window.The aircon worked well and the bathroom was fine.
In the morning from 6am-10am you can get free coffee and toast and jam near the reception area.You can hire bicycles from the hotel and costs just 50 baht a day,I think.
Nakhon Phanom is relatively quiet,traffic wise,so you should be safe cycling around.
We found Nakhon Phanom a very friendly town.It was a great find for us and we wouldnt hesitate to come back to the town or this hotel again.
The riverside promenade must run for a good 3 kilometres and nice for a stroll in the evening or early morning.
A good trip out from Nakhon Phanom is to Wat Phra Tat Phanom (53 kilometres away) which is the most sacred temple in the NE of Thailand.Personally,I'm not a great wow when it comes to visiting temples but this one was very impressive with a beautiful chedi.Its over a very large area and well worth a trip out.
The nearby town of Renu Nakhon (back about 15 kilometres,heading towards Nakhon Phanom then turn left) also has a nice temple,with a chedi,and is known for selling cotton goods at very cheap prices.

Room tip: Both standard and VIP rooms are nice and very clean but if I had an extra 200 baht to spend,then I'd go for the VIP room.
Ask Zidane08 about 777 Hometel
2  Thank Zidane08

This review is the subjective opinion of a Tripadvisor member and not of TripAdvisor LLC.
ploughman8
Atlanta, GA
156137
Reviewed August 12, 2012
Great value for money, central location, lacks only a view

I booked this hotel in advance via Agoda at US$34 for two days, which is in line with a B550 walk-in rate. As of July 2012 Air Asia was flying one daily flight to Nakhon Phanom, and I was on a 2-day sidetrip just to check the area out, as the RT fare wasn't TOO bad ($76RT base, $110 with all extras) and it beat fares to other possible options like Ubon or Nakhon Si Thammarat. The Nakhon Phanom (KOP) airport is small and pleasant enough, but it's important to get to the small desk for the B100 "limo service" (really a shared minivan) after baggage claim, as other transport options can be scarce and it's 16km or so from the center of town.

Anyway, the hotel is relatively new, and rooms have a sleek, European-style design. You do get more space than in a European budget hotel, though. Floors are tile, mattresses tend to the firm side, air-cons are the breadbox-shaped overhead room units, and you get a small frig and small flat TV with a budget selection of cable channels (Lao TV, Vietnam TV, Thai TV). Everything also worked nicely in the bathroom. The newness helped a lot.

Staff try to be helpful and are very well-intentioned, though in that somewhat dulled Thai manner that people say is a traceable to a rote-repetitive education system. That means the place stays clean and routine tasks get done diligently, and they also arranged the pickup for the B100 shuttle back to the airport. Keep things simple (it's a budget hotel, after all) and good things ensue.

There's also a larger TV for a communal area near the lobby, and you can rent a bicycle at B50 a day (Nakhon Phanom is actually small enough and traffic light enough that bikes can make sense). The central location is a nice advantage, as you're near the middle of town, yet off on a side street to mitigate any traffic noise. A 7Eleven (one of four I counted in the entire town) is about a 2-3-minute walk. It takes about 5-6 minutes to walk to the riverfront, and another 4 to the Indochina Market and riverwalk part of the riverfront. The "sunset cruise" on the double-decker boat leaves from this part of the riverfront at 5 p.m. daily, and at B50 for 75 minutes in a loop skirting the Thai side and then the Lao side, it's a great deal. And of course the views across the Mekong to the mountainous part of Laos are great.

This hotel is also near the better food options, such as they are. A few restaurants with decks or windows overlooking the river are along the river road north of the Indochina Market and maybe 6-15 minutes' walk from the hotel. Foreigners still aren't common in this part of Thailand, so don't expect much in signage and just look for a menu in English (tuna spaghetti, shrimp fried rice, that kind of stuff...) If you're better with street food and markets, head inland (due west) 2-3 blocks from the 7Eleven, where the nightly food stalls set up. Prices everywhere are Isaan-level, which is always nice.

Location-wise all this compares favorably to the two riverview hotels, which are both south of town and would need 15-20 minutes added to the times I gave if on foot. I checked out the nicest (The River View Hotel); it was about twice the cost, but you do get the river view (if facing that way) and a pool, plus some hotel restaurants. It's just a longer walk from anywhere. (BTW, bit the River View and Hometel 777 have parking).

Foreigners are still unusual enough in Nakhon Phanom that it's just assumed you're there because of a significant other (not in my case), and in the off-season there may be more people working in the tourist office than tourists in the town. There are a few things to see (old governor's residence museum, sunset cruise, sunrise over Mekong), but you can run through those in 2 days with time to spare. The extra elbow room can be refreshing if you've just been to Bangkok or Pattaya, and being almost a curiosity as a foreigner (kids point at you, you hear the word "farang" used a lot if people talk about you) is a real change. McDonald's hasn't even made it to this part of Thailand yet. It's good for decompression and trying to hide out from the (outside) world.

This review is the subjective opinion of a Tripadvisor member and not of TripAdvisor LLC.
sh_away
Washington DC, District of Columbia
3736
Reviewed July 28, 2012
Best Budget Option in the Centre of Town

If you're after relaxing in a comfortable room with river view the '777' isn't going to do it for you.

It's a new (2012) budget (B550)hotel. with small rooms (the larger vip rooms were all booked) with no view. The beds are rock hard but we slept OK. There's TV, frig and wifi in the rooms which are simple but very clean. The bathroom and hot shower are fine.

Continental breakfast (included) is disappointing. Instant coffee, white bread/toast and stale 'batingo'. Across the street a great 'Kai Gatha' (eggs & bacon & roll & coffee) is B60. We rented new bikes for the day.

The overwhelming selling point for the '777' is that it's downtown and easy walking to the river, walking market (Fri & Sat), many restaurants and the night market. Perfect for us!!!