Wow! Quiet, peaceful and beautiful. - Cottages By The Sea

Cottages By The Sea

If you’re looking for a quiet get away and love the ocean, this is a super spot. My wife and I have been here twice (once in Coconut Cottage and one in Compass Rose) and we just made reservations to come back in 2019. The ocean has good snorkeling right off the beach, which is 2 miles long and almost no people. When I say “right off the beach,” I mean 20 feet from the sand.More

Thank you so much for the 5 stars, Kevin. Every star helps and we look forward to your next stay with us! We are so happy that you enjoyed your stay.

Report response as inappropriateThank you. We appreciate your input.
This response is the subjective opinion of the management representative and not of TripAdvisor LLC.
See all 383 reviews
Nearby Hotels 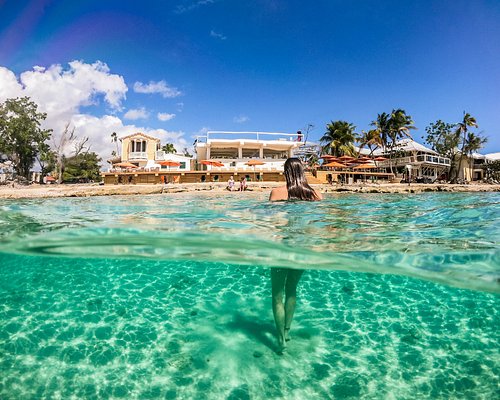 So, first of all, I should mention we are not luxury travelers. We love beachfront properties and we want the true travel experience anywhere we go. We aren't impressed by glitzy places that look like you're staying somewhere in Miami. That being said, this place was perfect by our standards! The location is amazing. The beach is outstanding and the proximity to the beach is wonderful. The staff could not have been more cordial or more helpful. The room had a kitchen including a small fridge and microwave, bathroom with shower (no tub) and a very comfortable bed with extra pillows. We stayed in the Chocolate room. The steps are not exactly even going from the kitchen/dining area to the sunken bedroom area, so the last step was a bit longer than expected, but hey... when in the Caribbean. We had a small front porch with a table and chairs and a live potted hydrangea. The view from our porch was a straight shot to the beach which was just feet away from our room. The hotel provided buckets of fresh water in front of each room for rinsing the sand from your feet before going inside. The hotel next door had a restaurant and bar (everything closes around 9:00pm). We rented a Jeep and explored the island, but decidedly preferred our little stretch of beach which was the ideal place to stay for a home base.

This review is the subjective opinion of a TripAdvisor member and not of TripAdvisor LLC.
Melissa H
Saint Louis, Missouri
2911
Reviewed March 16, 2018 via mobile
Home away from home

What can I say...hands down best place to stay on the island. Remote, quiet, friendly staff, beautiful beach. Most cottages have been rennovated but even if not rennovated the cottages are quaint and have everything you need. You are right on the beach. Have coffee on your deck or patio and watch the sunset or enjoy the complimentary rum and coke provided.

This review is the subjective opinion of a TripAdvisor member and not of TripAdvisor LLC.
SouthernPrincess0906
Dallas, Georgia
3210
Reviewed March 8, 2018
Amazing!

I have stayed at Cottages By The Sea two times now and I am very excited to stay again! I have been all over St. Croix but this by far is my favorite place to stay! The beach is absolutely gorgeous and the staff is amazing!

This review is the subjective opinion of a TripAdvisor member and not of TripAdvisor LLC.
scratchcat
canada
4953
Reviewed January 26, 2018 via mobile
Not quite ready after the hurricanes, but trying hard

After visiting the USVI and BVI’s for the last 20 years, we finally went to St. Croix, only because our original places were wiped out because of the Hurricanes.

Paul and everyone at the Cottages are trying so hard, but there were certain things beyond their control.

Power was restored while we were there, but generator power worked well in the interim.

The water to the cottages was a challenge. Water pressure was low, you could not drink it out of the tap, and when the water main broke, and they filled the cisterns with water and it wasn’t fit for consumption, the first thing they should’ve done was give us free bottled water, which was plentiful in the store. Air conditioning was sporadic too.

The town itself is going through a so called renewal, but still feels pretty edgy, and we’re seasoned travellers. We didn’t once venture into town at night.

Sleep was rare, because unfortunately the annual holiday festival was going on in town and the loud music and sub-woofers on the other side of the pier downtown kept us awake - some nights until 4....

Again, they were trying really hard, but when you’re paying high season rates, and not everything is 100%, then maybe you should adjust expectations ahead of time or the rates.

We were supposed to be there for 2 weeks, and left a week early and moved onto St. John, which was about as perfect as it could be under the circumstances.

Would I go back to St. Croix, probably not. Maybe as Paul suggested we’d be better off to go to the Alps next year or...

The sky was beautiful, the ocean was clear and turquoise, but a bit of a challenge to get in and out of because the sand on the beach was washed away and slowly returning, but still a long way to go.

This review is the subjective opinion of a TripAdvisor member and not of TripAdvisor LLC.
Err78
Miami, Florida
21
Reviewed January 24, 2018
bring me back

This was absolute paradise. The staff was welcoming and gracious. We rented Crows Nest, views were stunning. We just got groceries and cooked in the kitchen. Ive been dreaming of this place since I left!

Ask Err78 about Cottages By The Sea
1  Thank Err78

This review is the subjective opinion of a TripAdvisor member and not of TripAdvisor LLC.
View more reviews
PreviousNext
1…8910…64