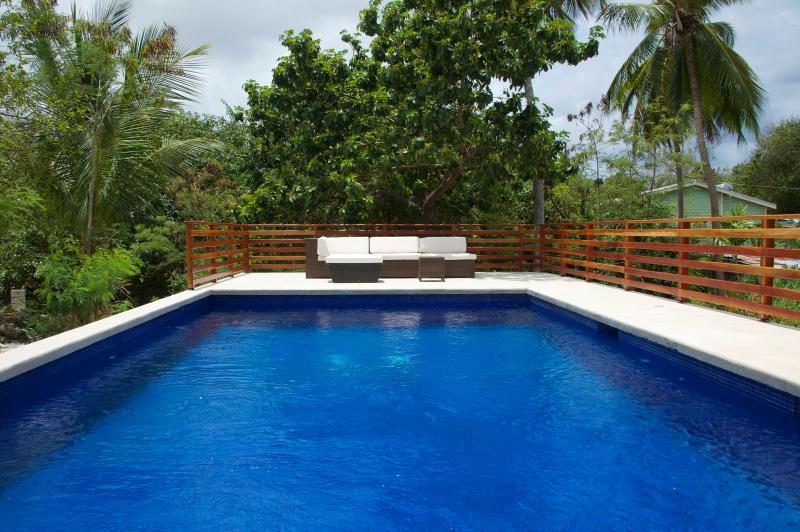 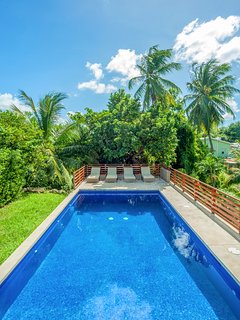 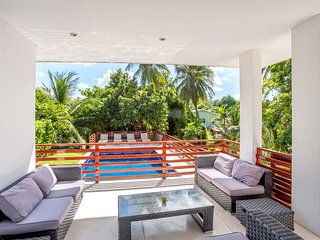 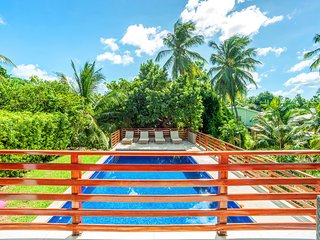 Very good - based on 13 reviews
Write a Review

Pear Tree House really stood out for us. It’s modern contemporary and very spacious. Sadly, the road it’s located on is far from a smooth drive and the surrounding area is quite tired looking in comparison. It features a lovely pool which lights up. If you can find the switch to turn them on. We eventually found the switch inside the fuse box in the store room underneath the pool at the far end. So you’ll need a torch to make your way there and back in the evening or just leave them on once you find the switch.

Although the furniture was a little worn, there is plenty of space to sit and enjoy a nice glass of wine of an evening if you can find a bottle opener (we had to go out and buy one as well as a can opener and we left them there! - two very basic items you would expect to find in the kitchen). We also noticed that according to the information book that was left for us, there was a tv monitor and a computer for watching dvds. There were plenty of films to choose from but nothing to play them on (no computer as stated), So don’t plan on an evening watching movies unless you go to the cinema - 5 minute drive into Holetown. WiFi was available but you had to remain within approx 10 metres of the router.

With 5 bedrooms, there was plenty of space to accommodate our party of ten. However, three of the bedrooms were children’s bedrooms - two featured children’s beds including a bunk bed (no ceiling fan it that room made it unbearable for my daughter to sleep on the top bunk and clearly too high for the cleaner to reach so the sheets didn’t get changed during our two week stay). The third children’s bedroom featured a sofa bed which has to be the most uncomfortable bed I have ever had to endure and whilst the sheet was changed once during our two week stay, the pillow cases were not.

But that’s not all. They have a ‘cleaner’ who we were told visits 3 times a week but it felt like that’s all she did. Visit. We had to wash the towels ourselves but couldn't do any washing for 4 days as the washing machine was broken. The owner, upon arrival, advised that a replacement one was being delivered the following day (replacement = not new). However, it wasn’t plumbed in until the next day and they discovered an technical fault. So that machine had to be replaced too. Finally it arrived on the Thursday. Oh, and the original old machine was left in the garden throughout our entire stay (not a good look). We ended up having to sweep and mop ourselves most of the time. We were also told we could get the towels washed as required but when we asked the cleaner, she told us it’s not her cleaning day! We concluded that no day was her cleaning day so be prepared to do your own housework.

The house features two sets of trifold doors so the whole ‘wall’ opens out - one onto the garden and old washing machine, the other to the patio. Only neither of them could open properly - we managed to get one to open up but couldn’t lock it back. The artificial cleaner proudly mentioned that her and the boss were the only ones who could lock it so we asked her to lock it for us when we went out for the day. But we arrived home to discover she left it unlocked. On our last day in the house, as we were getting ready to leave, three men turned up and entered the house with the cleaner (apparently to fix the locks on the trifold doors). We were given no warning and at 8:30 in the morning, three of us were undressed having just had showers. It wasn’t the greeting we expected, but we were so glad to be leaving that day!

Our conclusion? The house looks ideal in the pictures. As long as you bring mattresses and pillows, wash your own bedding and towels and are prepared to clean the house yourself, it’s fine.

Date of stay: July 2014
Liked best: Swimming Pool
Liked least: No comment
Traveling group: Extended Family
Would you recommend this hotel to a friend?   No.
Was this review helpful? Yes
This review is the subjective opinion of a Tripadvisor member and not of TripAdvisor LLC.
Thank you for your feedback. We are sorry to hear of your difficulties and unfortunately a number of minor problems all occured on your visit. We tried to respond as quickly as possible in each cade.
The DVD and monitor I had put in the apartment and we would of course have put back had we realised. The corkscrew and can opener were missing and we would of course have brought you one if we had known. There is a new DVD player, can opener andd corkscrew in the house (August 2014).
The pool is brand new and lit by LED lights at night which look attractive. We will look to move the switch to a more convenient place in future.
The sofa bed was clearly uncomfortable for you and I apologise for that. We have shipped a set of twin beds from the UK to arrive Sept 2014.
The bunk beds are advertised as childrens beds and we have put a new fan in that room as you found it hot.
The washing machine was replaced when you were there leaving the house without a machine for four days. During this time the house manager took your laundry home washed, drief and folded it and brought it back for free. I thought his was a good temporary solution and I am sorry you feel this is a reason for complaint.
The house is professionally cleaned between each guest. Clearly the ongoing clesning did not work for you. The cleaner had stated she spent her time collecting all the glasses and washing up piles of dirty dishes, picking up all the towels left on the floor etc. There is perhaps a perception that this is a hotel or guest house when it is a self service villa. The house manager now checks that she changed the sheets twice a week and cleans once a week .
The doors were fixed on your last day and I apologise if not enough notice was given.

Overall we have noted all your points and tried to resolve them and we are looking to constantly improve the house and furnishings.
This response is the subjective opinion of the management representative and not of TripAdvisor LLC.
Problem with this review? Thank you. We appreciate your input.

We really enjoyed our stay at pear tree. Monkeys in the garden it's opposite one of the bestbeachs and cliff restaurant.

Date of stay: March 2014
Would you recommend this hotel to a friend?   Yes.
Was this review helpful? Yes
This review is the subjective opinion of a Tripadvisor member and not of TripAdvisor LLC.
Problem with this review? Thank you. We appreciate your input.
Previous Next
1 2 3
Updating list...
Still can't find what you're looking for?

Looking for a place to stay in Saint James Parish?
View all 1,854 vacation rentals