Aruba
Search for "{0}"
Post
Trips
Tip: All of your saved places can be found here in My Trips.
Inbox
Log in to get trip updates and message other travelers.
ProfileJoin
Search

“Relaxing and authentic”
UmdWXzVfSUg1
other travelers have booked this property 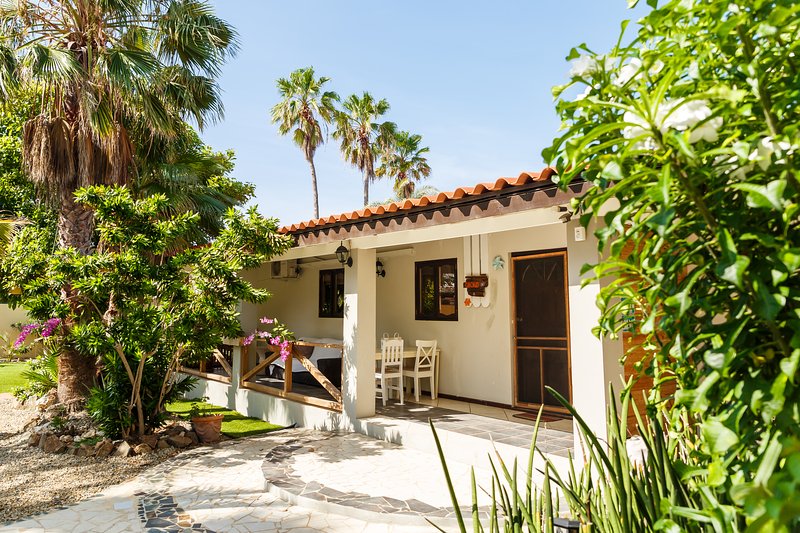 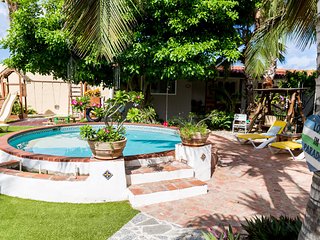 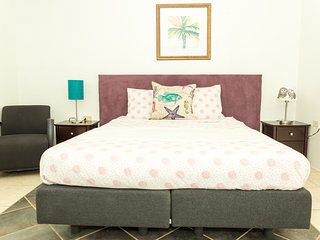 Average - based on 10 reviews
Write a Review

18 helpful votes
“Not what we thought we were renting”
Reviewed January 10, 2016 for a stay in December 2015
2
people found this review helpful

I only gave this rental one star because of the location... And I don't really think you can give zero stars as an option. This facility was abominable. My husband and I have rented houses twice before in Aruba and many times in other countries. That being said, this is the first time we've been sold a bill of goods. We were told this would be a two bedroom, one bath apartment five minutes from the beach. This is completely deceptive, it was not the correct facility based on the website/description. We were given the Palm apartment, but thought we were getting the Birdhouse. Either way it wouldn't have mattered as neither was a two bedroom. The owner has taken pictures of the same room but the furniture is changed to make two rooms look like three. This was a one bedroom apartment with a living room which had a bed, there was no sofa or indoor living space. We were told the apartment would have two queen beds and a roll away. The roll away would be an extra $20/night, upon arrival there were two twin beds and one queen (the queen was in the living room/kitchen combo). The beds had duvet covers, with no duvet or blanket inside, thank goodness we brought a blanket for our daughter. The "kitchen" had a table with three chairs, clearly indicating that this is not an apartment for four people. The website said there was a washer and dryer, neither of which was available for use. You could give the owner's maid your clothes and she would wash them, but you couldn't do them yourself as they were located in her home. As such you had to request fresh beach towels. The owner wouldn't give us towels without giving us attitude, saying they only change linens every three days in the high season, and weekly in the off season... Most likely because that is when the maid is there. After a beach day, towels should really been changed. And if we had our own washer/dryer we would have done them ourselves. When the maid was there, they didn't inform us of when they'd be entering the apartment. When cleaning, they left doors and windows open, therefore letting flies into the apartment. One morning we woke up to no fewer than 50 flies in the rooms. So disgusting. We found that they'd been coming though gaps in the trim. Their solution was an electric bug zapper racket. When my husband went to tell the owner, Alexander handed him a bottle of bug spray, clearly not concerned with being any assistance. Tu said it had never happened before, but then asked a litany of questions, which clearly indicated that this was not the first time they'd had this problem. She did caulk the one spot, but that only put a bandaid on the problem. The refrigerator was an under counter model, not a full sized which we were lead to believe from the pictures, it barely kept food cold, but the instructions said not to change the settings- although it was on the coldest setting. The freezer didn't freeze. The kitchen sink had no hot water, which is comical if you're going to try to eat there and wash dishes, which is the whole point of having a kitchen. The Wifi would only work when sitting outside - the comment in the booklet was "Internet can be slow or sometimes not working this is due to the network, and unfortunately there is nothing we can do about it." That seems like a complete cop out, when a simple router would fix that issue. They are an inconsiderate family who has no concern with guests, and we would never rent from them again. Their response and general attitude was "it's Christmas week" and somehow that was supposed to make it acceptable to screw over vacationers.

Date of stay: December 2015
Liked best: Location
Liked least: The owner and her attitude/being given the wrong apartment accommodations
Traveling group: Young Children
Would you recommend this hotel to a friend?   No.
Was this review helpful? Yes
This review is the subjective opinion of a TripAdvisor member and not of TripAdvisor LLC.
Please be aware this is a fake review. Guests did NOT stay in this property. Guests never booked a stay with us through FlipKey. Review has been reported for fraud.
This response is the subjective opinion of the management representative and not of TripAdvisor LLC.
Problem with this review? Thank you. We appreciate your input.

I would rate this place 6 stars if I could -- exceeded expectations in every way! This was a wonderful alternative to staying in an impersonal hotel! The setting is suburban, and although we rented a car and they provided off-street parking, I think it would be only about 15 minute walk to the beach. Restaurants, groceries, entertainment are all close by. The apartment was clean, well-maintained, and pleasantly furnished, but the real treasure was the lovely quiet garden where we spent most of our time. The host family is absolutely delightful and very helpful. (They live in the house that also fronts on the garden, so very accessible should you need anything.) We have stayed here twice; once in the studio and once in the 1-bedroom. Both visits were delightful. VERY highly recommended!

Date of stay: January 2015
Liked best: Beautiful secluded garden, and very hospitable host family
Liked least: having to leave :(
Traveling group: Spouse/Partner
Would you recommend this hotel to a friend?   Yes.
Recommended for:
Was this review helpful? Yes
This review is the subjective opinion of a TripAdvisor member and not of TripAdvisor LLC.
Problem with this review? Thank you. We appreciate your input.

My partner and I stayed at the Birdhouse 1 bedroom apt for our honeymoon.
The apartment is nice and large, everything you need is provided.
The aircon was very pleasant at night to break the heat and sleep better.
A private outside patio was available for our morning breakfasts and our romantic evening meals.
The garden was well kept and we were able to enjoy the nice swimming pool in the center of it.
The owners of the apartment live on the other side of the garden and they're willing to make your stay the most comfortable possible. They truly are a very lovable family.
The place is very conveniently located, it's close to Palm beach which is one of the 2 most beautiful beaches of the island.
We rented a car to move around so we never walked to the beach from there but I assume it wouldn't take more than 15 minutes.

We'll be back there next year, no doubt!
Thanks Djoek!

Date of stay: September 2014
Liked best: The wonderful garden
Traveling group: Spouse/Partner
Would you recommend this hotel to a friend?   Yes.
Recommended for:
Was this review helpful? Yes
This review is the subjective opinion of a TripAdvisor member and not of TripAdvisor LLC.
Problem with this review? Thank you. We appreciate your input.

704marwes
The Hague, The Netherlands

Date of stay: March 2016
Traveling group: Friends
Would you recommend this hotel to a friend?   Yes.
Was this review helpful? Yes
This review is the subjective opinion of a TripAdvisor member and not of TripAdvisor LLC.
Problem with this review? Thank you. We appreciate your input.
Previous Next
1 2
Still can't find what you're looking for?

Looking for a place to stay in Palm - Eagle Beach?
View all 206 vacation rentals