We spent a really nice three day weekend June 21-24 at ABC. Our two room suite, bedroom and living room with kitchenette, #245, was really very nice, with balcony right above the beach, 50 feet from the water. The restaurant and bar (Ricardo's) was moderately priced and had excellent food and service. It has a nice pool and beautiful beach. ABC is a short walk from a nicer than average casino and nearby hotels. Our only issue was that we were more comfortable sitting around the pool than on the beach, because the beach was windy and sometimes the sand blew.
We owe thanks to the reception desk staff, who went out of their way to be helpful, particularly the Front Desk/Reservations Manager, Teresa Britten, who could not have been nicer.More

Show less
Room tip: Our room #245 was at the end of the building right at the beach and was spacious and quite nice. Although we didn't request it, it may have been an upgrade.
See all 420 reviews
Nearby Hotels 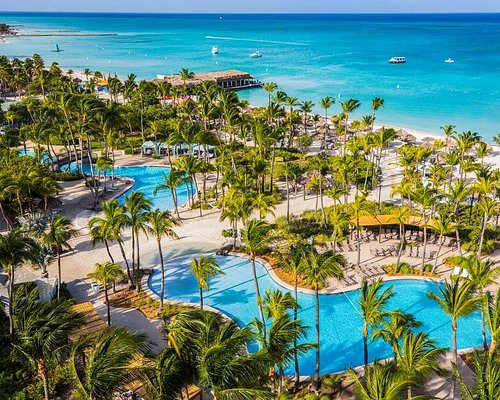 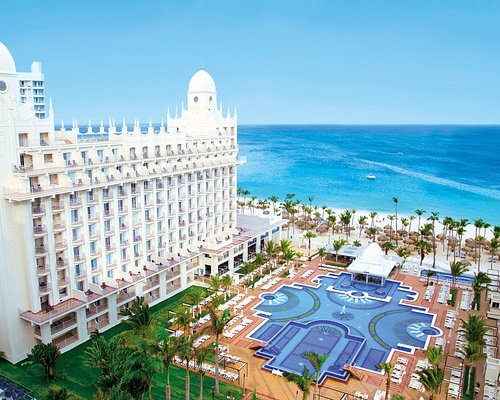 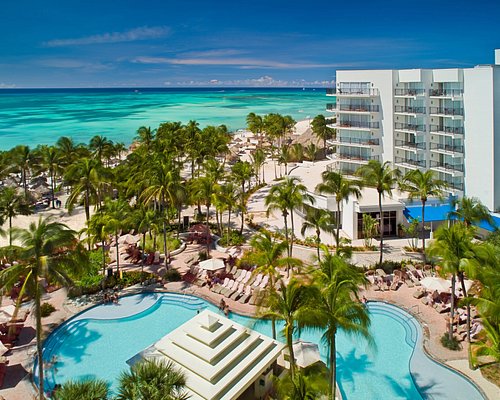 Taking safety measures
We compared the lowest prices from 20 websites
The Ritz-Carlton, Aruba
$939

We've rented at ABC for the past 3 years and have enjoyed being right on the beach without all the other activities (jet skis, etc.) Great place to sit under the "Chickees" and just relax. The staff is excellent, very helpful and friendly.

This review is the subjective opinion of a Tripadvisor member and not of TripAdvisor LLC.
2011_lapope
Breckenridge, Colorado
4627
Reviewed June 1, 2014
Average and nice, but know what to expect

We stayed at Aruba Beach Club (ABC) through an exchange for our Marriott time share. We had been to Aruba twice before and had always stayed on Palm Beach and decided to try Eagle Beach instead. Eagle Beach is a great walking beach very long and beautiful sunsets. However, Aruba Beach Club was a little disappointing. Although it was nice...a solid three star hotel...all of the guests were in mid-60s and over. Anyone under the age of 60 might feel out of place (we are early 50s and were by far youngest guests). My husband and I wanted a quiet romantic place and this was quiet, but had limited facilities and amenities, i.e., there is no concierge to book a restaurant reservation or any assistance for travel on the island. The in room internet while cheap, $35 for the week, is so bad it should be included we could not download a book from our room.
The rooms were, as I said solid three star hotel, but clearly NOT a four star property.as one reviewer said, this is NOT a Marriott.
The people there, while nice, were retirees who came and spent time together every year sometimes for several weeks, frequently gathering in a large group on the beach or by the pool. Also, chairs are limited and you must dash to the beach by about 6 a.m to get a cabana or chairs at all. If you go make sure you get towels the night before because the towel hut does not open until 10 a.m.
By far one great complaint of mine was although it said no smoking in several locations smokers were everywhere and the beach area was littered with a great deal of cigarette butts. It was a mess...which clearly is a reflection more on the inconsiderate smokers than the hotel itself, but even with the wind the smoke is still bad at this place.
We were fortunate to discover the bus which took us to Palm Beach in the evening because dining is rather limited in the immediate area. I read a comment about a lot within walking distance but I would disagree....we are runners accustomed to running or walking several miles a day and walked many places, but most would not choose to walk to most restaurants unless it was the one on the property. It is at least a mile to anything off property with the exception of the casino and a small strip mall outside the property.
It was a nice quiet place but we would not return to this particular location because there seems to be a lot more to choose from in Palm Beach in terms of things to do, but the bus can get you there quickly and I expensively if you do stay on Eagle Beach(taxis run about $7 one way from abc to Palm Beach)and it is great to talk to the Aruban people while you ride.

Room tip: Try to get a room toward the beach end of the hotel.
Ask 2011_lapope about Aruba Beach Club Resort
5  Thank 2011_lapope

This review is the subjective opinion of a Tripadvisor member and not of TripAdvisor LLC.
highwall
Arizona
615
Reviewed May 6, 2014
Great stay

We spent one week at the Aruba Beach Club from April 26-May 3rd in beachfront unit 163. We had a very nice stay at the resort. We especially liked the location of the room and the overall laid back feel of the place.
The front desk staff were very nice and helpful. The convenience of having a mini market and two nice gift shops on the property was a plus. We were in walking distance of several nice restaurants with Ricardo's and Pizza Bob's being our favorites. We also liked having the Alhambra Mall close by.
The days were extremely windy which could be a hinderance when walking the beach. The blowing sand actually stung when it hit our legs. Thankfully the wind would calm down most days.
We took a snorkeling/ sunset cruise on the Black Pearl Blue Emerald from 4-7pm one day and had a wonderful time. This is a really relaxing and fun excursion.
ABC was the perfect place for our family as we were traveling with my husband's parents who are 89 and 90 years old. They were able to easily walk to the stores, restaurants, and bars.
For the Catholics in the crowd they have a Mass on Sunday evening at 5pm on the Cayenna Terrace that was very well attended.
I will honestly say that we loved our room and the resort but feel that a younger crowd may not be as happy with it. Most folks were between 60-70's (my guess) and very nice but if you want night life and a younger crowd then I would look elsewhere. Also, we were only there for one week so it may be different at other times. There were a few families there with young children but not very many. The children that were there very well behaved and we enjoyed seeing them enjoying the beach and the grounds.
The highlight of our trip was participating in the 54th Annual Kings Day 10 K on 4/26. This was our first 10k and proud to say that we actually finished the race and enjoyed the experience.
Aruba remains one of our favorite island to visit and will hopefully return again in the not too distance future.

This review is the subjective opinion of a Tripadvisor member and not of TripAdvisor LLC.
Myra888
Glen Ridge, New Jersey, United States
718
Reviewed April 2, 2014
Our Home Away from Home

We have been coming to Aruba for over 25 years, staying at ABC, first as guests of owners then buying 2 weeks for ourselves in 1989. The Aruba Beach Club is perfectly situated right on the beach. There are two pools, a kiddie pool and a large rectangular pool. There is a restaurant on site open for breakfast, lunch and dinner. The rooms are clean and comfortable. Across the street is a new mall with the Alhambra Casino and more restaurants and stores to chose from. Very relaxing and quiet with a beautiful, clean beach. Great for couples as well as for families with children. The grounds are beautifully maintained. The front desk staff will try to help you with any questions you might have. Housekeeping keeps all the rooms clean and fully supplied with towels. Wonderful place for some great R&R.

This review is the subjective opinion of a Tripadvisor member and not of TripAdvisor LLC.
wendave2
Toronto, Canada
6840
Reviewed March 24, 2014
Location, location...

The ABC is located only 15 minutes from the airport on one of the best beaches on the island. The hotel is within walking distance of shops, great restaurants and a casino. There are $2 bus rides into the city. There is wifi throughout the pool area, although it does not reach most of the rooms. The rooms are nothing special but they are very clean and a decent size with a small kitchenette. This is an excellent choice for anyone looking for a quiet vacation on a beautiful beach.

This review is the subjective opinion of a Tripadvisor member and not of TripAdvisor LLC.
View more reviews
PreviousNext
1…414243…