$34
$16
View deal
eDreams$32
Agoda.com$34
StayForLong
View all 11 deals
Prices are the average nightly price provided by our partners and may not include all taxes and fees. Taxes and fees that are shown are estimates only. Please see our partners for more details.
adreaminasuitcase
6

A combination of traditional Vietnamese gardens with modern rooms and amenities. Jungle vibes all over. A pond with fish, coconut trees and lush greenery surround the bungalows. We loved our stay here, even extended it with 4 more nights. Rooms are big, with high ceiling, the bathroom has a huge window and shower cabin. We got 2 bracelets are were able to go to the private beach of Famiana Resort and Spa, which was pretty amazing and unexpected. A very good option for our stay in Phu Quoc.

Room tip: I believe all the rooms are quiet
See all 233 reviews
Nearby Hotels 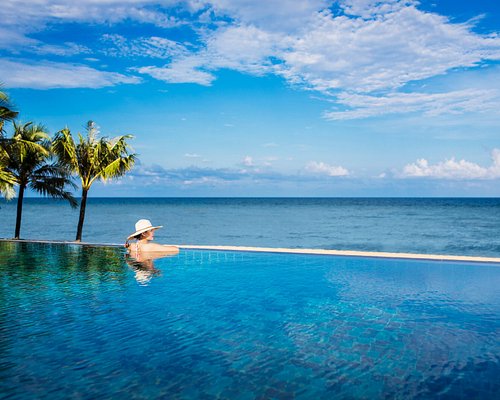 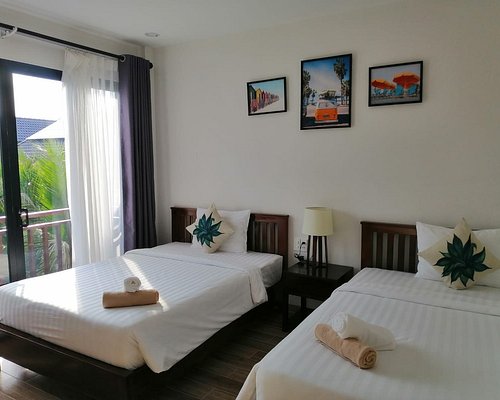 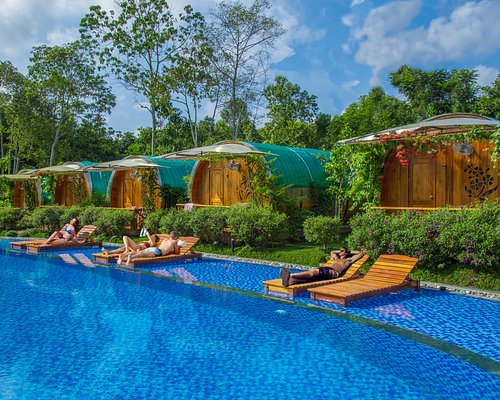 Langchia village is located 100 meter from the main road, and it is not popular to the local taxi/driver. It likes a small village with rooms surrounding the main garden and pool. The furniture in the room is quiet old, especially the bathroom. The breakfast is really simple with breads and jams, Vietnamese noodle, fried rice and fruits. The beach is at other side of the main road, and it took 10 mins walk through Faminia resort. I would recommend the Langchia village for its budgetary, but if your wallet allows, the Faminia resort is considerable.

Thank you for your nice review. We are delighted to hear that you enjoyed your stay with us and that our staff made you feel welcome. We certainly hope to welcome you again during your next trip to Phu Quoc.

Report response as inappropriateThank you. We appreciate your input.
This response is the subjective opinion of the management representative and not of TripAdvisor LLC.
Bangpo
Zurich, Switzerland
4470
Reviewed March 26, 2018
Most unfriendly service in Vietnam

The Langchia Restaurant at the main street looks friendly from outside, but I experienced a very bad service.

I was sitting there for more then 10 minutes, the staff was busy with their phones and not giving me attention. I had to go to the bar to ask for service.

When I ordered, I very clearly explained that I would like to have first the salad as a starter and then the main dish. They did not care and I had to start with the main dish and after a while a different salad as I ordered was served. I explained, that I not wanna have a salad with bacon, but that they not have to make anymore the salad I ordered, because I was already disappointed about the attitude they showed me.

When I tried to pay, nobody gave me attention, so I went again to the bar. There I met the owner lady who was angry, that I rejected the salad, which I not ordered. In that moment I understood why the whole Langchia Restaurant has not a good service.

"The fish starts to smell from the had!"

Dear Jan E
Thank you for taking your valued time to share experience when travelling to Phu Quoc.

However, there might be some misunderstanding happened since our hotel is Lancghia Village, not langchia Hostel. We hope that if any chance next time, we would like to welcome you back to Phu Quoc and let us have you in our care.
Should you need any information, please feel free to conact us by our email info.langchiavillage@gmail.com.

Report response as inappropriateThank you. We appreciate your input.
This response is the subjective opinion of the management representative and not of TripAdvisor LLC.
Bassam J
33
Reviewed February 17, 2018 via mobile
Good hotel with pros and cons

I was debating between 3 and 4 stars.
Pros:
- beautiful garden and great pool
- close to the beach 5 mins walk and in a good location. Plenty of good restaurants nearby.
- ok breakfast
- room has a beautiful porch overseeing the pool

Thank you for sharing your review on Tripadvisor. We are thrilled to read your positive comments regarding our resort, offerings and team members. Your constructive comments on how we can continuously approve.

We are looking forward for your return in our little hotel.

Report response as inappropriateThank you. We appreciate your input.
This response is the subjective opinion of the management representative and not of TripAdvisor LLC.
Thierry F
Paris, France
14749
Reviewed February 16, 2018
Peaceful hotel in a lovely garden

We had a very nice stay in this lovely place where the garden and the pool offer a moment of relaxation after driving on a motorbike through the hectic traffic on the island.
The bungalow is very comfortable and room-service comes every day to change towels and/or sheets.
You have free access with a special pass to the beach across the road.
Nice breakfast buffet every morning.
Thanks to Shana for her warm welcome and helpful tips for restaurants.

Thank you very much for your most generous review and for sharing your “Peaceful hotel in a lovely garden” experience at our resort on TripAdvisor. We are delighted to hear that you thoroughly enjoyed your stay with us and to count you as our valued returning guest. We hope to welcome you again soon.


Report response as inappropriateThank you. We appreciate your input.
This response is the subjective opinion of the management representative and not of TripAdvisor LLC.
MattyG1975
London, United Kingdom
74
Reviewed January 24, 2018
Worst place we stayed in Vietnam

In all the places we stayed in Vietnam this was by far the worst, despite being the most expensive. Almost everything was way below expectation. The receptionists were cold and unhelpful and difficult to find, the room was unacceptable, there was construction going on nearby, we only were given a sheet for bedding and we were badly bitten by mosquitoes.

On arrival we were shown to a room which was not the one we paid for - it had black mould on the bathroom walls and was nothing like the photos. We explained this to the receptionist who said that they were old photos and we should accept it. Eventually after much pleading we were given another room which was better but still not what we paid for. We booked four nights in advance but left after two because of the reasons mentioned above, but also as both of us were bitten by mosquitoes worse than I've ever experienced before. Probably not helped by the stagnant water outside the room.

When we left we asked for some kind of partial refund and then when we returned we emailed about this, but never heard anything back. Never any kind of apology either.

Apparently the place is under new ownership, so probably best to ignore a lot of the positive reviews from before.