$26
Free cancellation until 11/05/21
View deal
Travelocity$26
Orbitz.com$26
Prices are the average nightly price provided by our partners and may not include all taxes and fees. Taxes and fees that are shown are estimates only. Please see our partners for more details.
NE2020
Metro Manila, Philippines
103

Since the island is isolated and has very few resort, the prices are irrelevantly high and the food is just fine. The beach is cleaner compared to Sihanoukville and this is best for tourist who doesn’t like the city trash and noise

See all 347 reviews
Nearby Hotels 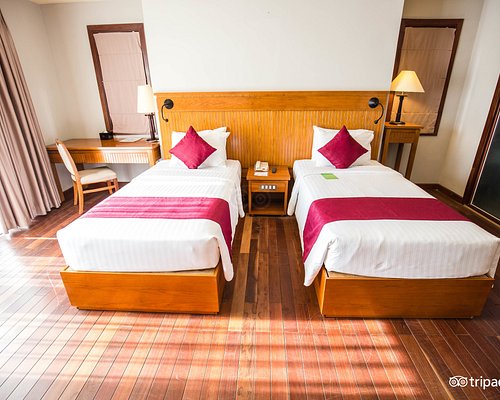 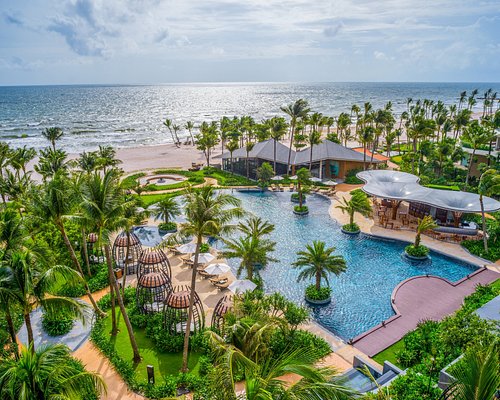 Im not normally one for negative reviews but after reading all the great positive reviews for this resort I didn't want people to fall hook, line and sinker like we did.

Where do I start.....Upon arrival as two couples we were shown to our rooms in the modern section. The only way I can describe our room was like being incarcinated in a dungeon cell. Dark, damp walls, foisty rooms with a tiny shuttered window at the back of the hotel. all in a all, a very depressing environment to sleep in (see attached pics). Truly awful experience and absolutely gutting when we were sold a paradise resort hidden away next to the sea amd away from the hussle and bustle of phu Quocs busy streets.

Our friends eventually moved rooms but both rooms overlooked a brick wall at the back of the hotel. The management offered to put them up in the old section for a surcharge of $15 a night per room. Which of course we objected to and they were moved to a "slightly"nicer dungeon cell.

It seems that a number of Brits we spoke to had the same issue as us. Basically ripping people off to upgrade by initially putting you in a crappy room.

We managed to get in touch with our tour operator who was an absolute diamond. Sadly the hotel management team didn't get back to him for three nights so we were stuck in the dark, damp smelling dull rooms. He's since pulled all his future bookingd from this hotel and found alternative accommodation. For a tour operator to do that after rubbish service from the hotel says a lot doesn't it.

Within each room there was tea and coffee provided but no milk/creamer. Our friends rang reception and the were told "you have to pay for it" I mean come on.....its a bit of milk....talk about terrible customer
Service.

One posirove is the the staff in the bars and restaurant were lovely. Just a real shame the management of the hotel don't take a leaf of their book and maybe work on their customer service skills. Not one knock on the door or a note to speak to us about our concerns despite speaking to our tour operator several times.

Moving hotels after three nights was a godsend. Complete breath of fresh air. A week in a dungeon cell would have finished us all off.

This hotel is more like a 1 or 2 star. Avoid as best you can.

Worst hotel we have ever stayed in.

This review is the subjective opinion of a Tripadvisor member and not of TripAdvisor LLC.
CM6999
Barnsley, United Kingdom
1221
Reviewed November 15, 2018 via mobile
Real let down

Notwithstanding the positive reviews about this resort we were very disappointed overall during our stay, which we cut short.
Two of our party were shown to a damp and rather smelly room with a very small window. Our room also had a wiff of damp along with a marvellous view of building debris. Upgrades were offered at a cost and were declined.
Reception staff were either unwilling or unable to help.
Staff in and around the resort were very pleasant and the location was fine so all is not lost lost if management make the necessary changes to save the place and return to the seemingly good standard previously offered.

This review is the subjective opinion of a Tripadvisor member and not of TripAdvisor LLC.
Karen B
Wigan, United Kingdom
2448
Reviewed November 14, 2018 via mobile
Awful - Needs to be fully refurbed

We travelled as a party of 4 to Long Beach Resort in Phu Quoc for our final weeks stay in Vietnam. Having read the majority of reviews we were really excited and looking forward to our beach holiday - how wrong could we be!
The hotel is a disgrace and would struggle to get a 2* rating.

Where to begin?
We booked in at reception on arrival and were told that we had to leave a minimum of 2 passports at reception, when asked why we were told it’s the law! (This is a lie and is not law in Phu Quoc).

We had booked 2 superior rooms in the modern block - we were taken to our rooms which were split up (fine) we walked into ours and it was like walking into a prison cell, the room was very dark, smelled heavily of mould, had very basic furniture, had a tiny window which when we opened the shutters looked out onto a wall about 12 inches away from the window itself and the dressing table was wet through.

I immediately returned to reception and told them the room was totally unacceptable and that we had booked and paid for 2 superior rooms, the reception staff tried to tell me that this room was correct, after about 10mins of deadlock I told them we wanted different rooms - I was told the hotel was full, so I said fine I will call our tour operator, they then said that they could move us to the old block into a better quality room if we paid an additional $10 per person per night! I said I wasn’t paying any additional money and I was ringing your operator and got my phone out, they then said we will change your room with other guests who hadn’t yet arrived!
We were shown to another room which was better but still definitely not superior in any shape or form!
Our friends room was a further floor up from ours and was also damp and mouldy.

The next morning we contacted reception and was still told the hotel was full and that we were in the right class of rooms.

Our air conditioning wasn’t working and we had no beach towels in our rooms, so we asked reception to fix this - the housekeeping staff brought towels but it took 3 attempts before we got the air conditioning working and at every point was told by reception staff ‘we will need to speak to the supervisor’ we demanded to see the manager but they never materialised.

The bathrooms looked quite nice however the shower was mainly cold and had very little water pressure.

We contacted our tour operator and explained the issues and poor standards, he spent the next 3 days trying to resolve the issues with the management without success.

The hotel itself is very run down, shabby and needs to be fully refurbished, the pool and beach are small with insufficient beds, the management are a disgrace and need to be removed and replaced with people who understand how to run a hotel - they would not accept that there were serious issues that needed to be addressed!

The only positive for the hotel was that the bar and beach food staff were lovely and did an amazing job trying to care for the mainly unhappy guests.

If you do not want a holiday from hell then avoid this ‘hotel’ at all costs, I have included photos below...

This review is the subjective opinion of a Tripadvisor member and not of TripAdvisor LLC.
Martin B
Exeter, United Kingdom
3711
Reviewed November 13, 2018
Bunch of Crooks

We had booked a Superior Double Room. When we arrived we were taken to a damp smelling room with a small window. with frosted glass, so no view at at. When we manged to open the window there was a wall right in less than 50cm away. Whwne we went back to reception to question how this could be a superior room they said that it was and if we wanted an upgrade we'd have to pay another $30 per night. They then showed us a bigger room with sea views and two bedooms(which we didn't need) .After a heated discussion they then showed us another room in an annex that again they said we shopuld pay extra for, In the end they let us have the room at no extra cost. Now here is the sting in the tail. Aftger two days my wife got chatting with another English couple and it transpired they had done exacty the same to them. Showing them an awful room and trying to get them to pay more for an upgrade. The setting is okay, but the breakfast is always running out of food. Would never go back!!!

This review is the subjective opinion of a Tripadvisor member and not of TripAdvisor LLC.
Lucy W
81
Reviewed November 7, 2018 via mobile
Awesome time!

Had a really lovely stay! So relaxing. So much so me and my friend forgot what day it was and missed our flight!
Staff were all so friendly, Daim on reception was great! He even knows about world vegan day!

Thank you so much!