Carbis Bay
Search for "{0}"
Post
Trips
Tip: All of your saved places can be found here in My Trips.
Inbox
Log in to get trip updates and message other travelers.
ProfileJoin
Search 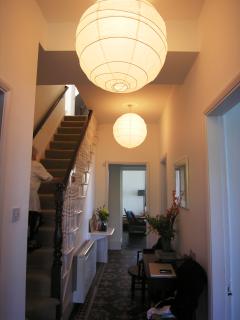 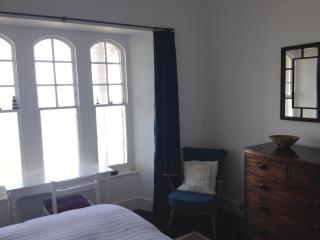 Excellent - based on 40 reviews
Write a Review

Date of stay: September 2019
Was this review helpful? Yes
This review is the subjective opinion of a TripAdvisor member and not of TripAdvisor LLC.
Problem with this review? Thank you. We appreciate your input.

I've just spent a week at Cliff Cottage, my first trip, and it was magical. Perfect location, waking up to the sound of the waves from beach below, not to mention the view! What a way to start the day. You're living in 'the house on the cliff', and you're proud of it! You're in a gentler, calmer section of Cornwall, quite private as you eat your breakfast looking out over the bay, but not remote - the charming and efficient train that runs behind the cottage can whisk you into the hustle and bustle of St Ives in only minutes. We also took the train inland to St Erth, for a wonderful river walk. Don't be concerned about the train line's proximity - it doesn't disturb you at all, it's a 4-carriage character from The Famous Five, not the Paddington Express. We found ourselves waving at it, as our week progressed!

The walks in the vicinity of the house are nothing short of breathtaking (sometimes in both senses of the word (!), and you can walk directly from the house, or drive to dozens of alternatives in a short time. If you're a dog-owner, the beach is restricted in the summer, which worked well for us, as it made us get up early to stroll the virgin sands prior to the 8am curfew - the beach to ourselves, it was glorious!!

As for the house, well, we fell in love with it. As many previous reviews have indicated, it's full of character, and is Tardis-like - so many rooms, we felt we hadn't stayed long enough to explore them all! They're also spacious, with beautiful high ceilings and large, let-the-view-in windows, and spotlessly clean. Even the boot room (fabulously useful with dogs!) is roomy. It's definitely an oldie-worldie, not a plain, boring, modern house - but that's not to say it's deficient in any way at all. We had constant hot water, used the modern cooker and dishwasher regularly, showered with decent water pressure etc. It's Victorian, stylish, with furniture to match. Yes, Annabel could take down walls, create a huge open plan set-up if she wanted, but thank goodness she hasn't. The proportions are perfect.

Downsides? None, really. You quickly get used to the fact that there's only one bathroom (there's a large guest basin in the downstairs loo, anyway, for night-washes) and the fact that the sink is separate to the main kitchen, in the scullery. Some might think that the TV could be bigger, but it was more than adequate for watching some of Wimbledon this week, and it would be fine for snuggling up beside the open fire if you had a winter booking.

We (3 old university chums and two small terriers) had a most memorable week, and were gutted to leave. If you're lucky enough to find Cliff Cottage available, do go. But don't tell anyone. Let's keep it our little secret!!

Date of stay: July 2019
Would you recommend this hotel to a friend?   Yes.
Was this review helpful? Yes
This review is the subjective opinion of a TripAdvisor member and not of TripAdvisor LLC.
Dear Pati, Thank you for describing the Cliff Cottage experience so well and expressing such pleasure in being at home there. It makes me very happy as I love it too in the same way . I hope to have you back whenever you can come best regards Annabel
This response is the subjective opinion of the management representative and not of TripAdvisor LLC.
Problem with this review? Thank you. We appreciate your input.

Our fifth trip in five years to Cliff Cottage, and as soon as we open the door it feels like home. This is not a place with all mod-cons, and is all the better for it. Annabel has kept lots of the original furniture, and resisted the temptation to update the kitchen into something modern and bland. Instead it's a trip back in time, full of character and personal touches. The views from the front rooms and garden are breathtaking, and access to the beach is either down your own private path (quite steep) or down the road to the hotel (less steep) - whichever way you go your feet are in the golden sand in a few minutes. Can't wait to go back!

Date of stay: May 2019
Would you recommend this hotel to a friend?   Yes.
Was this review helpful? Yes
This review is the subjective opinion of a TripAdvisor member and not of TripAdvisor LLC.
Dear Bill Thank you fir a wonderful review. You are a favourite guest best regards Annabel
This response is the subjective opinion of the management representative and not of TripAdvisor LLC.
Problem with this review? Thank you. We appreciate your input.

We stayed in December for my birthday with family but have only just got around to doing the review. We had the most wonderful time at Cliff Cottage and cannot wait to return. The cottage is just heaven. We felt so lucky to be there. So beautiful, clean, well maintained and well equipped (even wellies!) We walked into St Ives each day along the coast path. Father Christmas came into the town on the RNLI lifeboat on the Friday evening which was such fun to watch. Ideal location with the most beautiful views. It was a magical weekend and one we will never forget.

Date of stay: December 2018
Would you recommend this hotel to a friend?   Yes.
Was this review helpful? Yes
This review is the subjective opinion of a TripAdvisor member and not of TripAdvisor LLC.
Dear Bridget ,Thank you for your delightful review. I could imagine the walk and the scene best regards . Annabel
This response is the subjective opinion of the management representative and not of TripAdvisor LLC.
Problem with this review? Thank you. We appreciate your input.

Stayed 7 to 14 July. Booked at last minute and was a little hesitant as don't usually do bank transfers, so spoke with owner Annabel who was very helpful. Pleased we booked Cliff Cottage; our jaws literally dropped when we arrived and took in the amazing location with the Atlantic below us. We enjoyed many meanders down to the beautiful Carbis Bay beach and also just relaxing in the comforts of the cottage/ gardens whilst taking in the stunning views. Had some lovely coastal path walks, and it was easy to get to St Ives on the train. Loved the traditional style of the cottage, and had everything we needed. Highly recommend for the location and proximity to the ocean. One recommendation would be for more comfy seating in the lounge to accommodate more than four people.
We plan to return

This was our 5th visit to cliff cottage and it was as stunning as ever. It has everything to offer, albeit paddle boarding on the beach located from the garden path to the golden beach below, a coastal path walk to St Ives town and train back or many an hour relaxing on the lawn watching the sun set. You really couldn't want for more. Debbie and the gardener keep everything spotless. At the end of the day a good night's slumber in the massive scrumptious beds. Open the French doors and hear the waves below. In the words of Arnold Schwarzenegger, we'll be back! Cliff cottage is truly stunning.

Date of stay: June 2018
Would you recommend this hotel to a friend?   Yes.
Was this review helpful? Yes
This review is the subjective opinion of a TripAdvisor member and not of TripAdvisor LLC.
Thank you very much. It makes me very happy to know you loved your stay Annabel
This response is the subjective opinion of the management representative and not of TripAdvisor LLC.
Problem with this review? Thank you. We appreciate your input.
Previous Next
1 2 3 4 5 6 7
Do you own a vacation rental? List it here.

Looking for a place to stay in Carbis Bay?
View all 95 vacation rentals