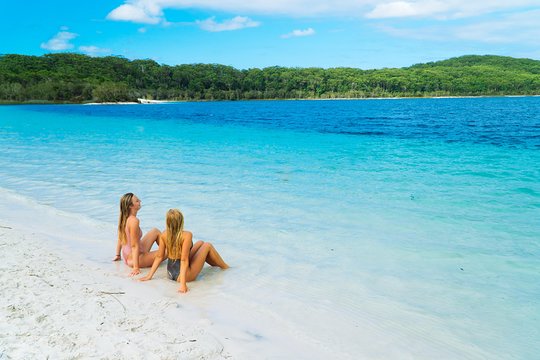 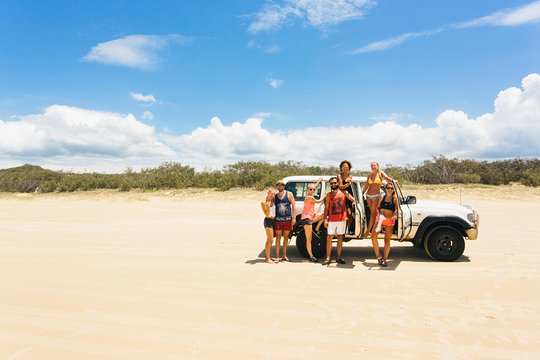 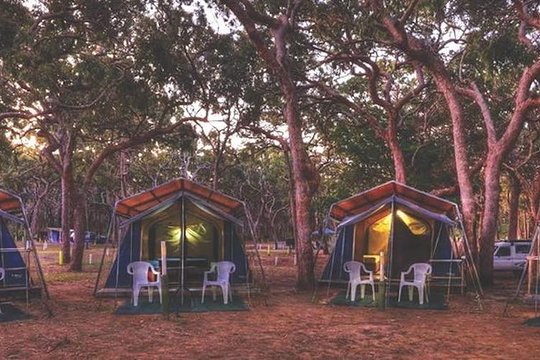 Stop At: Lake McKenzie, Fraser Island, Queensland 4581 Australia
We begin on the mainland with a morning brief at Freedom Rainbow Beach. At 9:30, once the brief is over and we’re packed and ready to go we depart for Fraser Island. After a short 10 minute drive to the ferry, we board for a short barge crossing to World Heritage listed Fraser Island, the world’s largest sand island!

Once we land, we speed along what’s known by the locals as Fraser Island’s highway, the eastern beach! From the eastern beach we head to the picturesque Lake McKenzie, famous for its amazing scenery and almost crystal clear waters. Here we stop for lunch and for some time to chill out and enjoy the sun, sand and water. After enjoying a swim or working on your tan we drive up the beach to our private campsite. Here you won’t have to worry about the stress of setting up your tent! We’ve got you covered with permanent tents and comfortable beds. Once at the campsite we have an early dinner and some well-deserved drinks while we swap stories with our new found friends.
Duration: 1 hour

Stop At: Maheno Wreck, Seventy-Five Mile Beach, Fraser Island, Queensland 4581 Australia
Enjoy a stop at the Maheno Shipwreck where you can learn a short history about this famous Fraser Island icon and grab photos of this well known wreck.
Duration: 30 minutes

Stop At: Eli Creek, 75 Mile Beach Road, Fraser Island, Queensland 4581 Australia
We'll then visit Eli Creek, a beautifully clear creek which is perfect for a relaxing swim and walk along the boardwalks. Let the gentle current float you along as you take in the beautiful scenery.
Duration: 1 hour

Stop At: Rainbow Beach Tourist Centre, 3/6 Rainbow Beach Rd, Rainbow Beach, Queensland 4581 Australia
Then it's time to begin our drive back down the beach and back to the barge where we wave goodbye to Fraser Island and join the mainland again. Once back, we return to the 4WD shed where we unpack and quickly clean the cars. We arrive back at Freedom Rainbow Beach between 3pm and 4pm.
Duration: 1 hour

Write a review
Traveler rating
Traveler type
Time of year
Language
Selected filters
Chloe wrote a review Jan 16
5 contributions2 helpful votes
Fantastic tour, amazing guide and good facilities
We had a unforgettable tour of Frazer Island where the people in our car took it in turns to drive, which is a great experience in itself, and then there’s the incredible views of the island itself. On day 1 we went to lake Mackenzie for the afternoon, after stopping for a great…
Read more
Date of experience: January 2020
Helpful
Share
Response from Relax23912054270, Guest Relations Manager at Dingos 2 Day Fraser Island 4x4 Tag Along
Responded 4 days ago
Thanks for joining us and leaving such a detailed and descriptive review! So glad you had such an amazing time on Fraser with your guide and group. Sounds like you really enjoyed the spread Jacob put on for you so he'll be pretty stoked to receive your feedback as well! Thanks for helping your fellow travellers decide if this tour is right for them, happy onward travels! - Shaz
Read more
About the operator 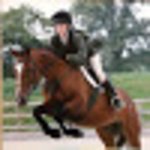 473chloef
42
Fantastic tour, amazing guide and good facilities
We had a unforgettable tour of Frazer Island where the people in our car took it in turns to drive, which is a…
Read more

12linmei
10
Unforgettable experience
I had such an amazing time on this tour. Tour guides were very friendly and the food was very good. The tour is…
Read more bubble85
leeds
98
Best way to see Fraser Island
I loved every second of this trip, from driving the 4x4s, camping and swimming in Lake Mckenzie the whole 3 days…
Read more 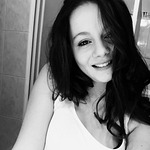 Lilix143
Verviers, Belgium
63
Self drive tour in wonderful place!
I really enjoyed these 3 days - 2 nights in Fraser Island ! The staff was amazing, taught us a lot of things and…
Read more

139trined
Margaret River, Australia
70
Bring your own food
Disappointed by the food, we were only given two wraps for lunch felt hungry for three days straight. We had some…
Read more