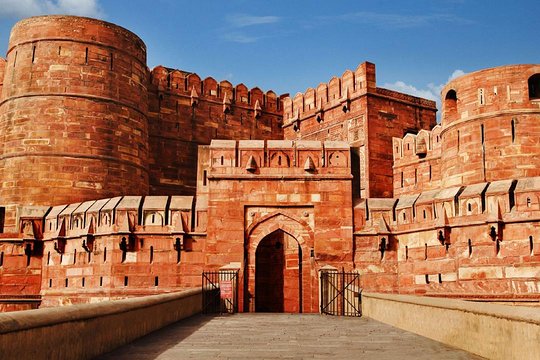 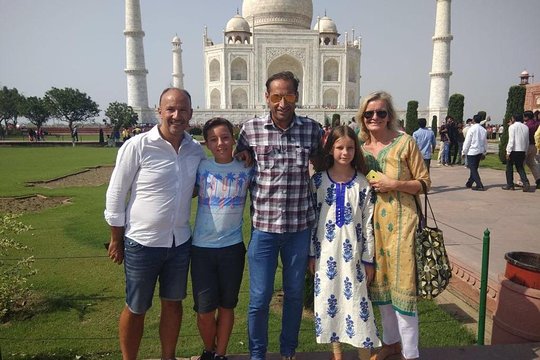 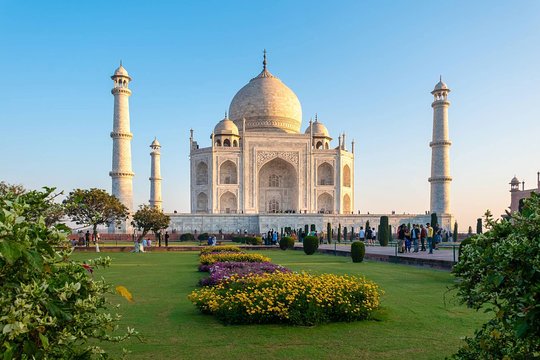 Day 1: Delhi to Agra By Train

Stop At: Indira Gandhi International Airport, New Delhi, Delhi 110037, India
At 06:30 AM pick up and Drive to Nizamuddin Railway Station to catch the super fast train for Agra, you will be provided with E-tickets either on email or through our representative.
Duration: 30 minutes

Note: Do carry a valid ID proof along with you when you sit in the train, ID proof could be Passport copy, driving license etc.

Stop At: Agra Cantt Tourist Information Center, 17, Mall Rd, Sultanpura, Gandhi Market, Agra Cantt, Idgah Colony, Agra, Uttar Pradesh 282001, India
Arriving at the city of love, Agra. Where the guide and driver would be waiting to welcome you in front of the exit of the railway station (Agra cantt) with your name board and then taking you to you're your hotel for check-in. After refreshment Visit  the Taj Mahal.
Duration: 1 hour

Stop At: Taj Mahal, Dharmapuri, Forest Colony, Tajganj, Agra 282001 India
The monument hold a grand history of love and affection of the emperor Shah Jahan to his beloved wife Mumtaz Mahal, which was made in the 16th century.

Stop At: Agra Fort Rakabgani, Agra 282003 India
Afterward you explore the heart of the Mughal Empire,

Agra Fort. This building itself gaves you the view of the glorious rule of the Mughals. The structure hold a brief history of not just the emperor Shah Jahan but this Great Grandfather Akhbar the Great. Who made the fort in the mid of the 15th century. Expected time of stay in Agra fort 1 hour.

Stop At: Tomb of Itimad-ud-Daulah, Yamuna River, Agra 282001 India
You may wish to enjoy

shopping in Agra is known for its fabulous handicrafts, made of marble and softstone inlay work. The Mughals were great patrons of arts and crafts. Empress Nur Jahan took personal interest and was an accomplished artist herself in zari embroidery work.

After having lunch, you will visit the Etimad-ud-Daulah also knows as Baby Taj or if you want to experience a sunset view of the Taj Mahal, then you can view the Mehtab Bagh. Later back to Hotel. Overnight Stay.

No meals included on this day.
Accommodation included: Overnight stay in hotel.

Stop At: Fatehpur Sikri India
After breakfast and check-out from hotel.

Enjoy an excursion to Fatehpur Sikri, a perfectly preserved red stone, which was the estranged capital of Mughal emperor Akbar, built in 1569 A.D. It is also known as "Ghost City". Later drive back to Agra and transfer to hotel for refreshment and drive to Agra Cantt Station to catch train to Delhi with a beautiful memory from Agra city.
Duration: 4 hours

Train will reach Delhi and a Driver will come to pick you up from the station and drop you back to your hotel or airport for your onward journey.
Duration: 1 hour

ResellScott
23
3 Days Private Golden Triangle Tour
The driver mr. omveer is a very patient and gentle person who drove safely and kept to the speed limits. I felt…
Read more

Penny L
Vienna, Vienna, Austria
22
Amazing trip
Great service . Tour guide was very attentive and make sure our needs were met. I will definitely use them again…
Read more 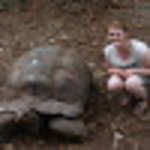 SarahH9065
10
Sunrise Taj Mahal
We had a tour with Rishi pal to see the taj and agra fort. Our tour was very pleasant and the guide was very…
Read more

_surappa10
Madikeri, India
21
Friends
Great taxi service Thanks for the taken care my friends.... I will refer my friends and family.......
Read more