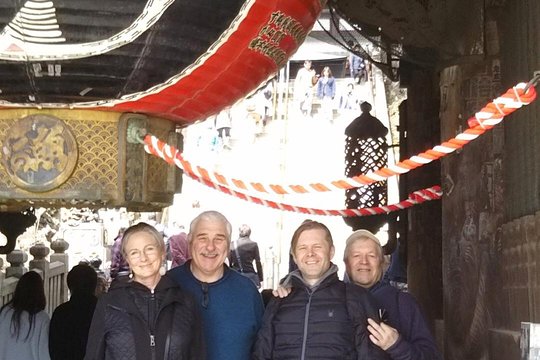 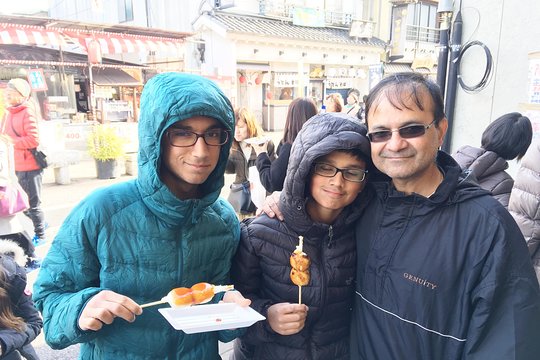 Select Date and Travelers
From
$81.32
(Price varies by group size)
Date
2 travelers
Free Cancellation up to 24 hours in advance
Low Price GuaranteeNo Booking Fees
Overview
Highlights
What to Expect
Narita-san Shinsho Temple is the best sightseeing spot, where over 10 million people visit in a year.

This tour starts from Omotesando where the distance between JR Narita station or Keisei Line Narita station and the main gate of Narita-san Shinsho Temple is 800 meters. Along Omotesando, there are around 170 spots such as eel restaurants which have welcomed tourists since Edo era, wooden inns which has an atmosphere of the town in Edo era, the shops to sell hand-made Narita Special rice crackers, Teppo-zuke of Uri, Yo-kan, local sake, and the other Japanese sweets. Every spot is familiar and you can enjoy choose the souvenirs and walk to eat at ease.

And also, in the extended space of the temple, there are a 15 meters ‘main gate’ made of all Japanese zelkova which is called Keyaki in Japanese, ‘Nioh gate’ which was built in 1830 and was designated as a national important cultural property, ‘Misshakukongoh and Naraenkongoh’, which are Narita-san’s God, standing on the right side and left side of the gate, and the stateliest ‘main hall’ of the temple. All of them are must-see. Furthermore, both of a vivid ‘Three-Storied pagoda (that is a Buddhist tower)’ and a large pagoda for peace (called ‘Heiwa no Daito’) are also must-see national cultural properties which were built in Edo era. In addition, you can find a large pagoda for peace whose symbol is gold shining nine rings (called ‘Kurin’). This large pagoda for peace is filled with overwhelming force. And there is Mandara (Buddhist visual schema of the enlightened mind) which is drawn in brilliant color on the walls and ceilings in the pagoda. Especially, you must be surprised at a fascinating coloration of them, indeed. If you go down to Narita-san park at a foot of the large pagoda for peace, you can enjoy a well-kept beautiful Japanese garden and seasonal nature.

And at the end of the tour, we will try Sake tasting at Takizawa Honten Sake Brewery. The most famous brand in this brewery is “Chomeisen” (Spring of Longevity), a winner of several prestigious competitions. The water used in brewing is top-quality water that is said to heal the illnesses of the pilgrims. At the brewery, we can taste "Chomeisen" and some seasonal Sake made at here.

When you join this tour to walk around Narita-san where Japanese history and traditional culture are filled with, you are definitely able to leave Japan without any regrets.
Show More
Important Information
Departure Point
Keisei-Narita Station, Hanazakicho, Narita, Chiba 286-0033, Japan
Departure Time
10am or 2pm
Duration
3h 30m
Return Details
Returns to original departure point
Inclusions
Exclusions
Show More
Additional Info
Cancellation Policy
For a full refund, cancel at least 24 hours in advance of the start date of the experience.
2Reviews5Q&A

Write a review
Traveler rating
Traveler type
Time of year
Language
Selected filters
Angela S wrote a review Nov 2019
1 contribution4 helpful votes
Perfect Layover Trip
I had a wonderful tour of Narita with Shinya. He was very knowledgeable about the area and even had a notebook and placards with extra descriptions of some of the areas we visited. I highly recommend having him as your tour guide. This tour was the highlight of my entire visit…
Read more
Date of experience: October 2019
1 Helpful vote
Helpful
Share
Response from Takeshi S, 支配人 at Private Narita Layover Tour including Sake Tasting
Responded Nov 14, 2019
Thank you so much for joining the tour and your review. I’m glad that you enjoyed exploring Narita with Shinya. I hope you will come back to Japan and we can serve you again. I'm looking forward to seeing you!
Read more
Read 1 more review on Viator
About the operator

By: OMAKASE
451 reviews
Certificate of Excellence

veronestrella
Philippines
83
A Day of Warmth in Cold Sapporo
We had a wonderful time in Sapporo, with Chieko’s guidance. She was very knowledgeable about the place and could…
Read more

N441CUpauls
Kyoto, Japan
11
Very good introduction to Japan
We had a wonderful time on this walking tour. Our guide was very friendly an knowledgeable. Such a beautiful place…
Read more

D2999CDchristinah
Dublin, Ireland
11
Historical & Cultural Experience
I was incredibly lucky to have booked a walking tour with Yoshimi today. She is a wonderful guide providing her…
Read more

Stephenbw
11
Wonderful tour
Only positives for my daughter and myself on this walking tour. Firstly, our guide, Arika was wonderful. Arika: -…
Read more

K226STsylviah
11
Tokyo Tour wird Arika
We had a wonderful day with Arika. She showed us some hidden places and told us a lot of interesting things. Arika…
Read more

susansB9619BZ
10
A Taste of Old Tokyo
If you are interested in historic Tokyo/Japan, this is a nice tour. My guide, Rei, was knowledgeable in not only…
Read more

Loa2807
11
Another side of Japan
I booked this tour for my family...12 person from 5 years old to 72 years old. It was an amazing experience. Our…
Read more

VangieVistan
Calumpit, Philippines
11
Sapporo, Hokkaido Tour 2020
We had a great time thank you Mr. Toshimi Kodowaki for the nice and memorable tour and for your kindness. I highly…
Read more

angelaY4417RA
Chuo, Japan
21
Wonderful Tour and Great Guide
We went on this tour the last day we had in Tokyo and it was a great way to end our holiday. Yumi was a phenomenal…
Read more

SALT-54LT
Yeppoon, Australia
2015
Great Tour Awesome Guide
We booked the tour as our first to do after arriving in Tokyo to experience old Tokyo, the tour didn’t disappoint.…
Read more

GarryandKay
10
Yanaka Walking Tour
Rei was outstanding. Communication was no issue as Rei had been a journalist and had lived and worked in the UK…
Read more

sns223
Okinawa City, Japan
61
Information packed!
Chieko showed my son and I many sights in Sapporo. She was a wonderful tour guide, very helpful, patient, and…
Read more