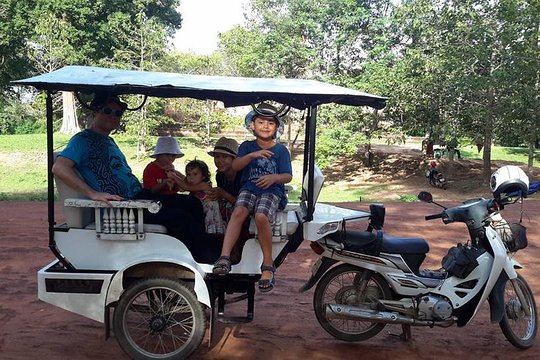 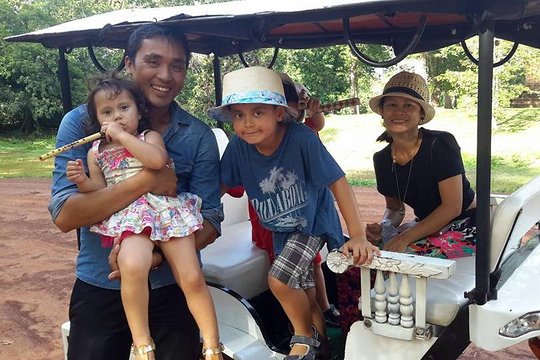 Likely To Sell Out
Select Date and Travelers
From
$135.00
per group (up to 4)
Date
2 travelers
Options
Select tour language
Free Cancellation up to 24 hours in advance
Low Price GuaranteeNo Booking Fees
Overview
What to Expect
Day I

Enter Angkor Thom through the monumental South gate, Avenue of gods and asuras lining the bridge across the structure moat.
Bayon temple or state temple of Javavarman VII is one of the most enigmatic and powerful religious constructions in the world. It is a unique mass of “face tower” which created a stone mountain of ascending peaks. There were originally 54 towers of which is 37 are still standing today. Most are carved with four faces on each cardinal point. The central has many more.

Baphoun is the vast temple near the center of Angkor Thom. It’s under France’s restoration project, it is possible to access the entrance gate and the elevated walkway entrance and there is a huge reclining Buddha on the west side of the temple.

Elephant Terrace is the heart of Angkor Thom and looks out over the Royal Square. It marks the entrance to the Royal Palace and the focal point for the royal receptions. The carvings of elephants along its wall give its modern name.

Leper King Terrace This massive terrace is named after the 15th century sculpture that was discovered on top of it. It probably dates back to the reign of Javavarman VII and has been restored in the manner which allows visitors to explore the earliest to most recent addition by actually entering the internal layers of the structure.

Afternoon tour:
Angkor Wat & Sunset at Phnom Bakheng. Built between the 9th and 14th centuries, the temple of Angkor are among the grandest monuments ever constructed. The entire complex covers approximately 164 square miles with over 200 temples. Among the 30 temples that are accessible today, the most famous is Angkor Wat, the largest religious building in the world. Conceived by Suryavarman 2 in the early 12th century, Angkor wat took an estimated 37 years to build. Unlike most other Khmer temples, it faces west , the most likely reason being that the temple was dedicated to Vishnu, who is sometimes associated with the west.
Bakheng Hill is for sunset, late 9th century was the state temple of the first capital of Angkor. The view from the top is magnificent, particularly of Angkor wat to the south east and is the most popular spot for visitor at sunset.

Day II
Morning tour:
Depart for jewel of Angkor, Banteay Srei, known as the “citadel of the women” or “Citadel of Beautiful” presumably referring to its size and delicacy of its decoration.
Unlike the major sites of Angkor, Banteay Srei was not a Royal Temple. It was built not by kings, but by King’s guru. Often described in terms as the jewel of Khmer art, Banteay Srei is a temple of great beauty and compares with little else in Angkor. Its miniature scale almost always surprises visitors and the near total decoration of its surfaces is exceptional.
On the way back from Banteay Srei , you will see beautiful brick temple Pre Rup. Brick temples built earlier than Sandstone temple.

Afternoon tour:
Preah Khan built in the 12th century was one of Javavarman VII ’s largest projects dedicated to his father. Preah Khan was much more than a temple with over 1,000 teachers it appears also to have been a Buddhist university as well as a considerable city. Preah Khan is located on the western edge of its own long Baray, the Jayatakata, and the terraced landing stage at the end of the temples W-E axis access to the lake with a moat surrounding the city.

Neak Pean is collected of five ponds in the middle of reservoir Jayatakata, The man-made 70m square pond surrounded by four smaller ponds.
Ta som is a small monastic complex, face tower Gopuras many of the carvings which show and uncommon individually. A huge tree grows from the top of the eastern Gopura. It is destroying the gate, but it is a photo classic. Best photographed in the afternoon.

Day III
Morning tour:
Visit Kravan temple, it is the best brick carvings in the country, built by a group of Gurus in 921 and then Banteay Kdei.
Ta Prohm or Tomb Raider Temple was built in 1186, 12th century by Jayavarman VII as a royal monastery. It was dedicated to the King’s mother. This temple was chosen to be left in its natural state as an example of how most of Angkor looked, upon its rediscovery in the 19th century. Shrouded in jungle, the temple of Ta Prohm ethereal in aspect and conjures up a romantic aura with gigantic roots and branches intimately with the stones and probing walls to form a natural roof above the manmade structures.
Ta Keo temple, Chausay and Thommanon temple.
Afternoon tour:
Floating Village in the Tonle Sap Lake (Great Lake) and Artisan Angkor (fine arts school) and Local market

103loughill
62
A fabulous day with a brilliant guide
We had a fabulous day starting with sunrise over Angkor Watt, back to the hotel for breakfast, before being shown…
Read more 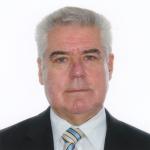 stevedV2487JV
Newbury, United Kingdom
3724
Golden Wedding Anniversary
My wife and I used Buffalo Tours, now known as Discova, during our stay in Cambodia for all our transport needs…
Read more 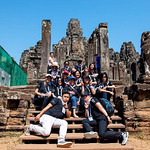