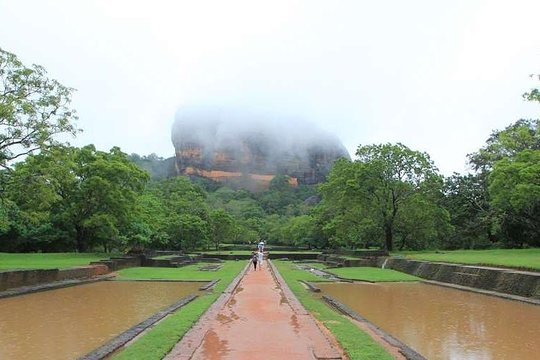 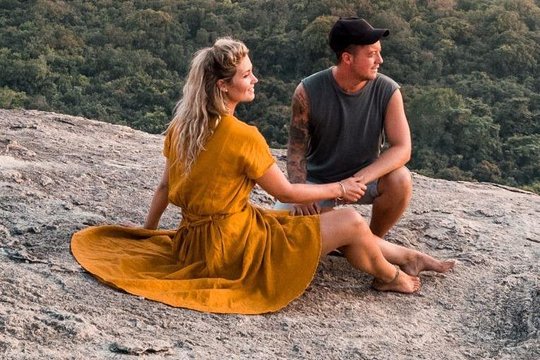 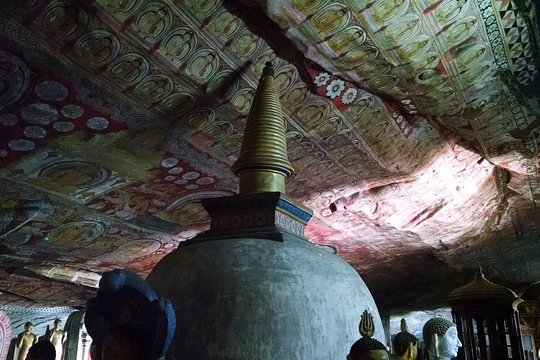 Stop At: Dambulla Cave Temple, Jaffna Hwy, Habarana 50150 Sri Lanka
Dating back to the first century B.C.E., the Dambulla Cave Temple represents the most impressive cave temple in Sri Lanka. It has five caves under a vast overhanging rock, carved with a drip line to keep the interiors dry. In 1938 craftsman embellished the architecture with arched colonnades and gabled entrances. Inside the caves, the ceilings had been painted with intricate images of the Lord Buddha and Bodhisattva's, as well as various gods and goddesses following the contours of the rock.

The Dambulla cave still operates as a monastery and remains the best-preserved ancient edifice in Sri Lanka. The complex dates from the third and second centuries B.C.E., serving as one of the largest and most important monasteries. King Valagambahu has been traditionally believed to have converted the caves into a temple in the first century B.C.E. The caves in the city provided refuge to King Valagamba (also called Vattagamini Abhaya) in his fourteen year long exile from the Anuradapura kingdom. Buddhist monks meditating in the caves of Dambulla at that time provided the exiled king protection from his enemies. When King Valagamba returned to the throne at Anuradapura kingdom in the first century B.C.E., he had a magnificent rock temple built at Dambulla as a gratitude to the monks in Dambulla.

Many other kings added to it later and by the eleventh century, the caves had become a major religious center. King Nissanka Malla gilded the caves and added about seventy Buddha statues in 1190 C.E. During the eighteenth century, the Kandyan Kings restored and painted the caves.

The largest and best-preserved cave temple complex in Sri Lanka, the rock from which the caves were carved towers 160 meters (520 ft) over the surrounding plains. More than eighty caves have been discovered and documented in the area. Major attractions are spread over five caves which contain statues and paintings of Lord Buddha and his life. A total of 153 Buddha statues, three statues of Sri Lankan kings and four statues of gods and goddesses also stand in the site. The latter include statues of the Hindu deities, Vishnu and Ganesh. The murals found there cover an area of 2,100 square meters (22604 sq ft). Depictions on the walls of the caves include Buddha's temptation by Mara and Buddha's first sermon. UNESCO designated the Golden Temple of Dambulla a World Heritage Site in 1991.[1]
Duration: 1 hour

Stop At: Sigiriya The Ancient Rock Fortress, Sigiriya 21120 Sri Lanka
Sigiriya (Lion's rock) is a rock fortress and ruins of a palace situated in central Matale District of Sri Lanka dating to the fifth century B.C.E. Although the history of the building of the fortress, palace, and monastery is unclear, most probably it was built by King Kasyapa (477–495 C.E.) of the Moriyan dynasty as a fortress and palace. After Kasyapa's death, the fortress was converted into a Buddhist monastery and served for the next eight hundred years when it was abandoned in the fourteenth century. Rediscovered by British explorer John Still in 1907, the site has undergone extensive archaeological work, opened to researchers, scholars, and visitors.

Stop At: Minneriya National Park, Maradankadawala-Habarana-Thirukkondaiadimadu Highway, 50150 Sri Lanka
Enjoy Minneriya National Park by Jeep. There are numerous elephants in this park. Unlike in other national parks, elephants can be spotted at a relatively close range. This park has over 150 species of birds, about 9 types of amphibians and 25 varieties of reptiles. More than 75 butterfly species are found in this area. Park is also home to a rare bamboo trees not found in any other national park in Sri Lanka.
Duration: 3 hours

Meals included:
• Breakfast
• Lunch
Accommodation included: No Accommodation On This Day
Show More
Important Information
Departure Point
Traveler pickup is offered
We pick up travelers from any Hotel in Negombo

Departure Time
6:00 AM
Duration
2 days
Inclusions
Exclusions
Show More
Additional Info
Cancellation Policy
For a full refund, cancel at least 24 hours in advance of the start date of the experience.

By: Dream Travels and Tours
1 review 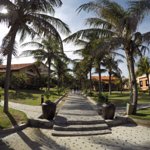