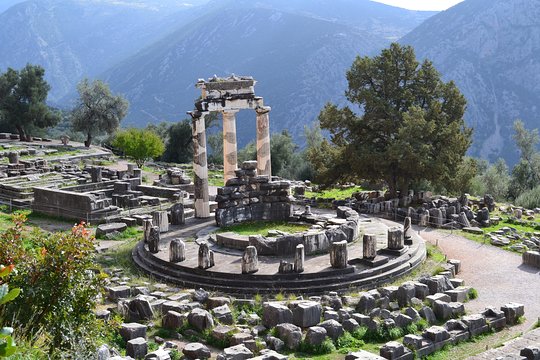 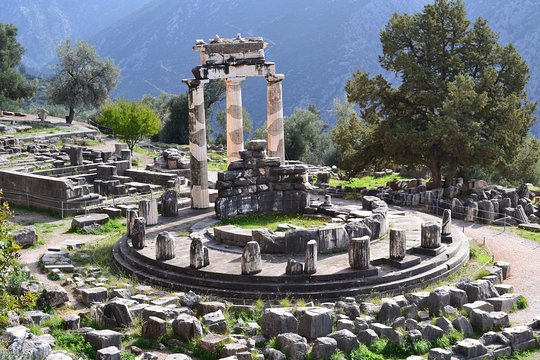 The 2-day private tour starts in the morning of the first day.  Your driver will travel you through the villages of Thebes &  Levadia to visit one of the most famous Monastery of Ossios Lucas, known for its byzantine architecture and the golden mosaics, built in the 11th century.

After a short stop at the monastery, the private tour will continue towards Arachova, one of the most famous and popular winter destinations in Greece. Arachova is a lovely, picturesque mountain village, built on the south slopes of Mt Parnassus. It is famous for its bright multi colored carpets and the several local products including fresh pasta, cheese and sweets.

After Arachova, the tour will take you to Delphi, the ancient sanctuary of Apollo. Our private tour includes a visit to the Delphi Museum where you can see among others the archaeological treasures of the ancient oracle, the unique bronze Charioteer, and the sacred way to the Athenian treasury.

After our visit to the archaeological site and the museum of Delphi, we will enjoy a tasteful lunch in Delphi or Arachova.  We will continue our private two day tour driving through the towns of Central Greece (Amphissa, Lamia, Trikala). We will drive through the Thessaly plain, the granary of Greece, to reach Kalambaka late in the afternoon, where we will spend the night.

The second day of the tour starts with the visit to the breathtaking monasteries of Meteora, which is part of UNESCO‘s World Heritage Sites, built on the top of high rocks.

You will have the chance to visit byzantine monasteries of unique beauty and architecture, built in the 11th century.

After the visit to Meteora the tour will take you back to Athens, passing by the famous Thermopylae, the Hot Gates of Ancient Greece.

This is where the battle of Thermopylae took place in 480AD between the Persians of King Xerxes and the 300 Spartans of King Leonidas.

Late in the afternoon, we will arrive in Athens ending our tour.
Show More
Important Information
Departure Point
Traveler pickup is offered
Departure Point 08:00am: HOTEL MEETING INSTRUCTIONS: We will meet you at the main entrance of your hotel. Please inform the porter that you are expecting your tour driver to call for you. If you are staying in a small hotel, please inform the receptionist instead.

CRUISE PORT MEETING INSTRUCTIONS: Please disembark and walk outside the terminal exit door, where our driver/guide will be waiting for you holding a sign with your name on it.
Dates: See Availability
Return point: Return at the same spot

Write a review
Traveler rating
Traveler type
Time of year
Language
Selected filters
Popular mentions
Kunal B wrote a review Oct 2019
3 contributions
Amazing Tour with Panos
Our family had an Amazing 2 days tour of Delphi and Meteora with our driver Panos - a super friendly, nice professional who made the trip even more memorable. The drive was smooth, comfortable. Panos helped us prioritize and plan our day carefully, while still managing to get…
Read more
Date of experience: October 2019
Helpful
Share
Christos H wrote a review Oct 2019
Sydney, Australia3 contributions7 helpful votes
Paros is a star... best driver and best tour
We booked a family tour with this company and loved every minute of our journey. Our driver (Panos) was an absolute star. From start to finish he was obliging, informative, courteous and good humoured as he drove us to Delfoi and Meteora, with a stop at Thermopoly to visit the…
Read more
Helpful
Share
David B wrote a review Jun 2019
Rio Rancho, New Mexico2 contributions2 helpful votes
Great experience
We took the 3 day, 2 night tour of Olympia, Delphi, Thermopylae and Meteora. We had a great time and saw a lot in a very short time. If you're considering a cheaper bus tour vs this one, you really want to think it through. Our driver, Panos, was friendly and knew all about…
Read more
Date of experience: June 2019
1 Helpful vote
Helpful
Share
Asher Tay wrote a review Jun 2019
Singapore, Singapore69 contributions7 helpful votes
Amazing highlights of the trip with an excellent guide
We would like to thank our guide/driver, Panos, for being the most amazing & friendly guide we have met. We really hit it off from the start, with Panos, who speaks excellent English, being really friendly & helpful. We booked the tour to visit Delphi, Thermopylae, & Meteora.…
Read more
Date of experience: June 2019
1 Helpful vote
Helpful
Share
About the operator

xaniecat
Fort Collins, Colorado
65
Really fun day
This was a very fun and informative day! Our tour guide picked us up at the Athens port, and we were off. We saw…
Read more

bugmankennyg
Ponchatoula, Louisiana
30
service
the tour guide we had (George) was extremely knowledgeable of his city and the history of athens. he spoke english…
Read more

markcochran1512
30
A great tour
We had an awesome time! We were taken to various sites and we had an itinerary that suited us superbly. We had…
Read more 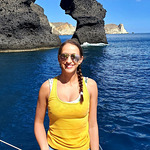 Ashlyn S
Atlanta, Georgia
102
THE BEST PART OF OUR TRIP!
"Athens Tours. The best decision I made when booking my trip to Greece was choosing Athens Tours, Greece, for my…
Read more

Ruffles23
72
Buyer Beware
When I booked this tour I asked if Sunday, November 17th was available and was told that it was. The tour was to…
Read more

san18
new york
4284
Great tour guide and one day tour
Demetri was an excellent tour guide. His English is excellent and he planned the tour according to our needs…
Read more 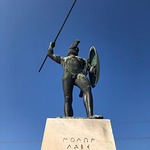 KenInIndy
Indianapolis, Indiana
3550
Day Trip - Delphi and Thermopylae
Our driver was Demetrios and he was great. The vehicle was clean, the conversation was friendly and I we were in…
Read more

Needlepointer48
10
Athens In A Day
We had a driver and a tour guide. Since there were just the two of us, our days was customized for what we wanted…
Read more

AmandaL937
Sydney, Australia
239
2 day Delphi & Meteora
We looked at doing a group tour initially and to do this private tour as a family of four worked out to be not…
Read more

rogercharlie
Bengaluru, India
7284
Average experience
Had expected a more polished experience given the feedback on TripAdvisor. The guide was very very average. Could…
Read more

Eddie0409
10
AMAZING AMAZING AMAZING !!
We were on honeymoon in Athens and booked this tour for our first day and it is by far the best tour we have ever…
Read more

Nancy K
Kamakura, Japan
110
Sparta, Mystras, Diros Caves and Olympia
My husband and I booked this tour to continue our Greek experience after a cruise of the Greek Islands. We were…
Read more

viaggiatore8111
Milan, Italy
160
very good
really kind and helpful guides, always with a smile and always happy to answer any question we may had
Read more